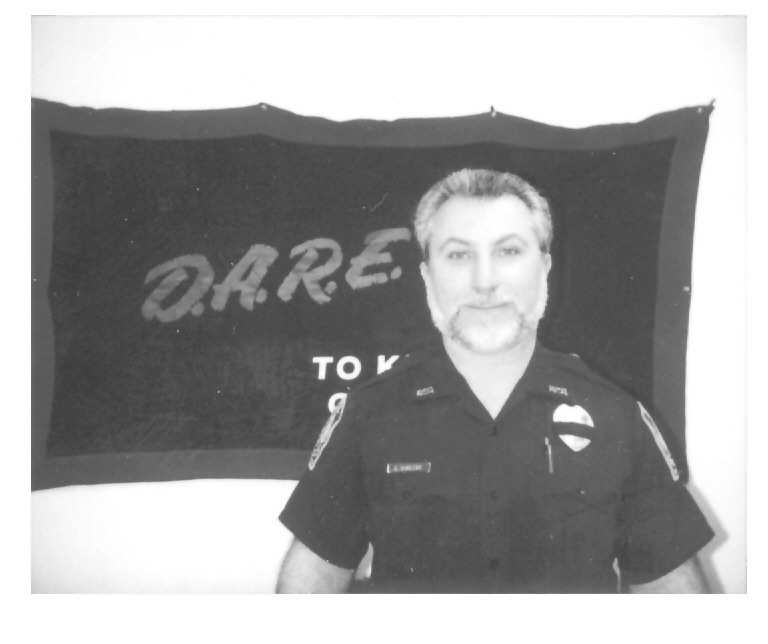 Though most teachers and administrators seems supportive of Officer Gary Vincent — and his Glock 17 9-mm gun — some students say the weapon isn’t welcome.

“The fact that there’s a police officer walking the halls with a gun makes me feel unsafe,” said Jessica Zarrella, a senior at Eastern.

In the wake of a heated meeting with administrators over the gun recently, some students from Zarrella’s advanced placement U.S. government class say they may survey students about the matter.

Senior Jessica Mikes, who is working on the survey, said she thinks having a cop at Eastern with a gun is “a bad idea.”

“It’s not as though our school is violent enough to require a gun,” said Mikes. “It’s unnecessary. He doesn’t need it. It’s a bad message, the gun.”

Vincent, a former DARE officer, regards his firearm as part of his uniform.

“Studies have shown that without the full uniform, you don’t command the same authority,” said Vincent. “The gun is part of my uniform and without it I don’t have the same authority. You have to keep that. When you lose that authority, that respect, that’s when things go wrong.”

“It’s the image that he projects by carrying the gun,” Zarrella said. “It’s very negative. He’s establishing authority through fear, rather than through respect.”

Early this year, Vincent began spending his Fridays at Eastern, doing what he calls “community policing.”

“My goal is to prevent juvenile crime before it happens,” said Vincent, “by being a friend, role model, problem solver, mediator and informational resource.”

Some students think Vincent is entitled to his gun.

“It’s not like he’s here for target practice,” said Mike Santoro, senior class president. “It’s not really a threat to anyone. If a situation arose, he may need his gun.”

Senior Nick Sibly said the gun “shouldn’t be an issue.”

“It’s part of his uniform, like his belt or badge,” said Sibly. “It’s good to know that, if a cop is needed for some reason, he is there.”

Others fear that an officer with a gun could signal stricter security measures.

“It may be good for the school to have a police officer here, keeping an eye out,” said Heather St. Onge, a sophomore, “but the next step could be a metal detector.”

Staff and administration insist that it’s not Vincent’s position to patrol or to draw his weapon, and that he won’t unless his life — or someone else’s — is threatened.

“We’ve had fully uniformed officers in and out of the schools all through my career,” said Principal V. Everett Lyons, “and it’s never been a problem. I don’t have any real problem with
it, or see it as a threat. I do, however, see where [students] would be uncomfortable, and I can respect that.”

“I feel it would be nice if he could conceal the weapon,” Josephson said. “Some people are afraid, or their anxiety level has been risen. It could be a nice compromise to conceal it.”

It was in Josephson’s government class that students first objected to the gun.

A recent meeting between Lyons, Carolyn Cistulli, Vincent and protesting students failed to satisfy the group. Cistulli is the district’s $90,983-a-year director of instruction and professional development.

“She accused us of being childish and said that we were ‘wasting her time.’ I don’t think she took us seriously,” Zarrella said. “We just feel that he could do his job in a blazer and tie, or without the gun.”

Cistulli declined comment on the meeting’s specifics, saying only that the students are “good kids who were concerned.”

During the meeting, Zarrell said, Vincent contended that the gun is essential to his position, saying that without it he wouldn’t want the job.”

“I don’t think that we resolved anything,” said Lyons, “and it’s really an issue on which there’s very little middle ground. We do want to keep the dialogue open, though.”

A second meeting was cancelled without explanation.

Vincent keeps office hours at Eastern from 10:45 a.m. to about 2 p.m. on Fridays. He said a big part of his job is speaking to students about the law, careers in police work and the dangers of drugs and alcohol.

“I enjoy working with young adults and I was given a gift for communicating with young people. I really feel like I’m accomplishing more doing this than handling complaints or something.”

According to Vincent, Police Chief John DiVenere picked him from a handful of volunteers for the position. Lyons and Superintendent Ann Clark also had to approve the post, Vincent said.

Across town, Officer Tim Ustanowski works at Bristol Central High School in a similar capacity. He and Vincent also spend time at the city’s middle schools.

“I think it’s a great idea,” said Larry Hochman, head of Eastern’s guidance department. “Some kids feel more comfortable, in certain situations, talking to an authority figure. He’s a resource for the students, by choice, and it’s worked terrifically so far.”

Vincent said the aim is to bridge the gap between students and the police.

“Students have to understand that I want to be their friend first,” stressed Vincent, “but I’m also an authority figure that can help them should they need it. I am a policeman and I do have the full power of arrest. The gun is for their protection.”