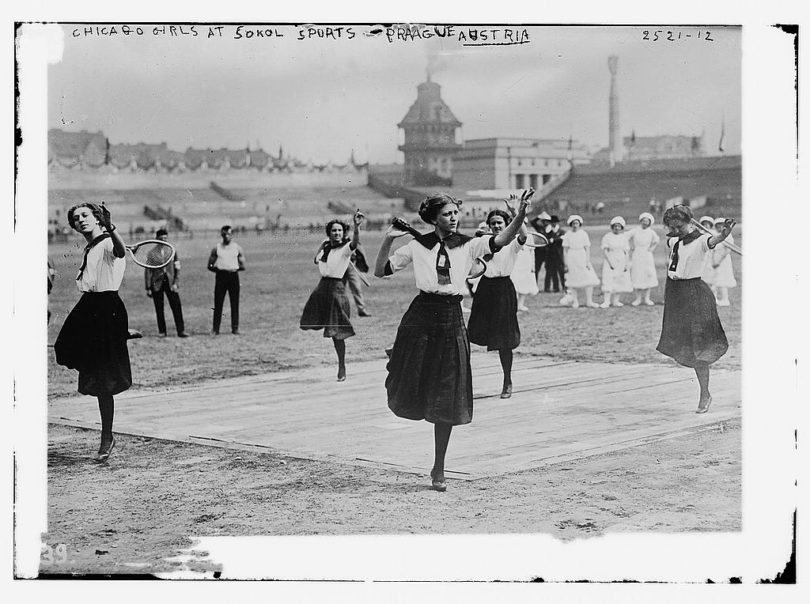 Chicago girls at Sokol Sports, Prague, Austria in 1912 (Bain News Service)
MELBOURNE, Australia – It’s International Women’s Day, and gender equality is getting better here in Australia, but there is one major area of society that is
lagging behind: sports coverage.

Sport is massive in Australia, but not many people realize that women play what are usually considered male sports, and how many women play these sports. These include Australian Rules Football, cricket, rugby and soccer.
In Australia, all national men’s leagues have a least one match telecast on TV each weekend, but women do not get this luxury.
The W-League (Women’s national soccer league) used to get one game a week on the Australian Broadcasting Corp., but after recent federal budget cuts, the ABC stopped broadcasting the league.
In Victoria, like other states and territories in Australia, there are well established women’s leagues and teams, but not many people know about it.

Australian
Rules Football is a very popular sport in Australia, played by hundreds of thousands of people. Unfortunately, when most people think of Aussie Rules, they think of the Australian Football League, with its big marks, big wages and big media coverage.
What a lot of people don’t realize is women also play Australian Rules, and they play at the exact same quality as the men. The only thing missing is the coverage and the opportunities to make a career out of the sport.
The top women’s league in Victoria, the VWFL, is seen by many as the equivalent of a local men’s league in terms of coverage in media circles and in how much the athletes can make a career out of the sport.
Take the VWFL’s most well-known star, Daisy Pearce, for example. She is captain of both the Melbourne women’s team and her local team in Darebin, but she has to work as a midwife to earn an income.
Dianna Haines, the captain of Diamond Creek – arguably the second best team in the VWFL’s Premier Division – has to make her living teaching chemistry at a Melbourne high school.
I have no doubt that both of these athletes would much rather be playing footy for a living then working their current jobs.
In terms of TV coverage, the VWFL gets absolutely nothing, whereas the top two men’s leagues get one game a week on commercial TV. All the rest of the AFL games are covered on pay TV. It just isn’t fair.
There are policies in place to bridge the gap between the levels of opportunities, but the progress is moving very slowly.
Another sport where female athletes suffer life in the shadow of their male counterparts is soccer. When people think soccer in Australia, they think the A-League and all its glitz and glamor.
A lot of people don’t realize the existence of the W-League and the opportunities it offers female soccer players.
Unlike Aussie Rules players, female soccer players can make more of a living from their sport, but they still don’t get a lot of coverage on TV and in newspapers.
It’s the same with the national team, the Matildas. For years, the Matildas have ranked in the top 10 worldwide while the men’s team, the Socceroos, have been lagging towards the bottom of the top world 100.
Despite this, every single thing that happens to the Socceroos – whether good or bad – gets noticed, while the Matildas get a tiny mention every once in a while. It’s not acceptable.
In cricket, Australia’s female athletes also suffer life in the shadow of their male counterparts. For years, Australia’s national women’s cricket team, the Southern Stars, have been winning the World Cup and tournament after tournament, but still getting very little coverage compared to the men’s team.
Pay for the women cricket players is also nowhere what their male counterparts receive. At the moment, the top pay that a Southern Stars player can earn is $52,000, while the top male players receive more than $1 million.
The men’s cricket team sees every single possible game telecast, whereas the women only get the occasional T20 international telecast and only if it is a double header with a men’s international. The problem continues with domestic cricket league, where newspapers cover the matches of the men’s team but largely ignore the women.
While a lot has been done to close the gap in gender equality, sports are one area that is really lagging behind.
Women play sports just as often and just as well as the men, but they don’t get nearly as much coverage in newspapers, online and on TV.

It has to change.

Alyce Collett is a Junior Reporter in Australia for Youth Journalism International.

***
Your tax-deductible contribution can help support Alyce Collett
and other students at this nonprofit at
www.HelpYJI.org