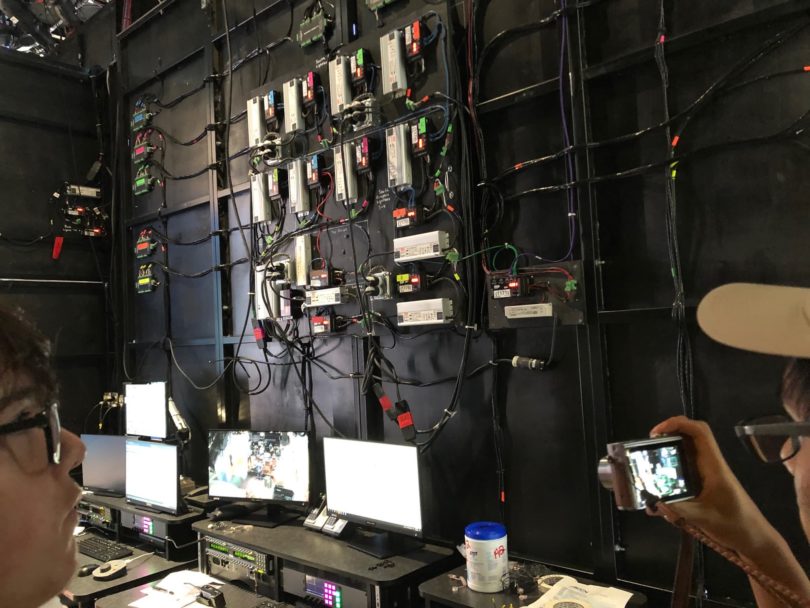 YJI student Owen Ferguson looks on as fellow student Selvaganeshamoorthi Balakrishnan snaps a photo behind the scenes of the ACC Network at ESPN just hours before the launch. (Justin Hern/YJI)

Bristol, Connecticut, U.S.A. — Tonight, as ESPN launches the ACC Network, its new college sports television channel, anyone watching another ESPN channel will have a short “road block,” where all other programming is paused to give viewers a chance to watch the launch.

In the past, a channel launching may not have been incredibly significant, but in an age where streaming and on demand platforms are the go-to for most Americans, ESPN is making a unique decision by starting up a linear cable network.

Although sports are more often than not viewed live in comparison to other forms of television, this is still an interesting move from the company. 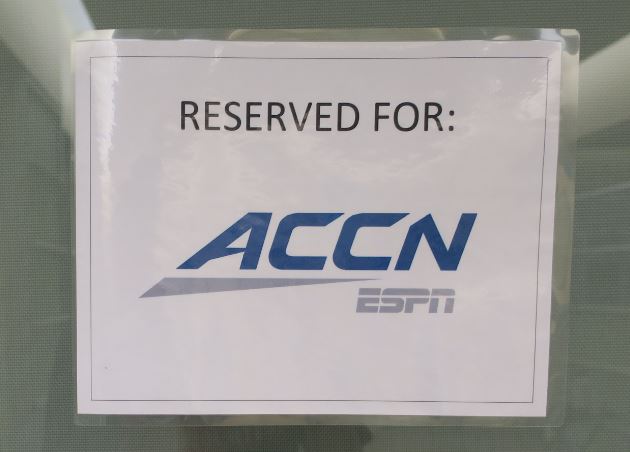 ESPN’s mission, as brightly lit up on their campus, is “To serve sports fans. Anytime. Anywhere.” With this new network, ESPN aims to expand that service to more fans.

Katie Hughes, a spokesperson for the company, says that they wish to “meet what fans are looking for” and to “give ACC fans more content to celebrate their conference.”

ESPN is working hard to promote the new channel, with constant commercials and advertisements, as well as a countdown to the network’s launch.

The ACCN will exclusively cover sports from the Atlantic Coast Conference, one of the “Power Five” collegiate athletic conferences, along with the SEC, Big 10, Big 12, and Pac 12.

Since the collapse of the Big East conference in 2013, the ACC has been growing exponentially, adding several marquee schools, including Louisville, Notre Dame, and Syracuse into its ranks.

The conference was always strong in basketball, but it has recently become more relevant through its football programs. Once thought of as one of the weaker football conferences, the ACC now contains some powerhouse programs, including the perennial championship contender, Clemson University.

It currently boasts the reigning national champions for both of the two largest collegiate sports in the country, the Clemson Tigers football team and the Virginia Cavaliers basketball team. The ACC also features the fearsome Duke vs. North Carolina rivalry, one of the most famous in all of college sports.

A collegiate conference having its own television network is nothing new.

With the addition of the ACC, each major conference except the Big 12 will have its own network.

ESPN also owns the SEC Network, which features similar programming to the ACCN, but covers the Southeastern Conference.

It is an opportunity to make money for both the conference and ESPN, with the latter reportedly paying the ACC $240 million dollars every year for the rights to show their programming, according to The New York Times.

The ACC Network will broadcast its first football game August 29, the season opener for the number one ranked Clemson against Georgia Tech.

According to ESPN, it will air 40 regular season ACC football games, 150 men’s and women’s basketball games, 58 men’s and women’s soccer games, and various smaller ACC sports between the fall and winter seasons. The network also will feature several other programs, including sports talk shows and documentaries.

The ACC Network will officially launch at 7 p.m. on Aug. 22.