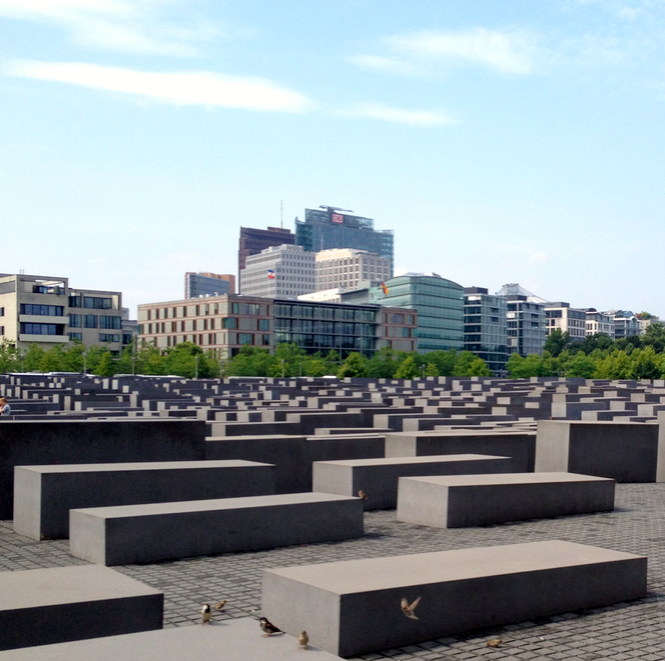 The Holocaust memorial in Berlin. (Myah Guild/YJI)
BERLIN, Germany – As a history fanatic, I eagerly anticipated my visit to Berlin.

We arrived into the worst thunderstorm I’ve ever seen. The rain was falling down in sheets that drenched you the minute you stepped outside. It was leaking through the shelters, and the lightning was so close, I thought it might hit the station. 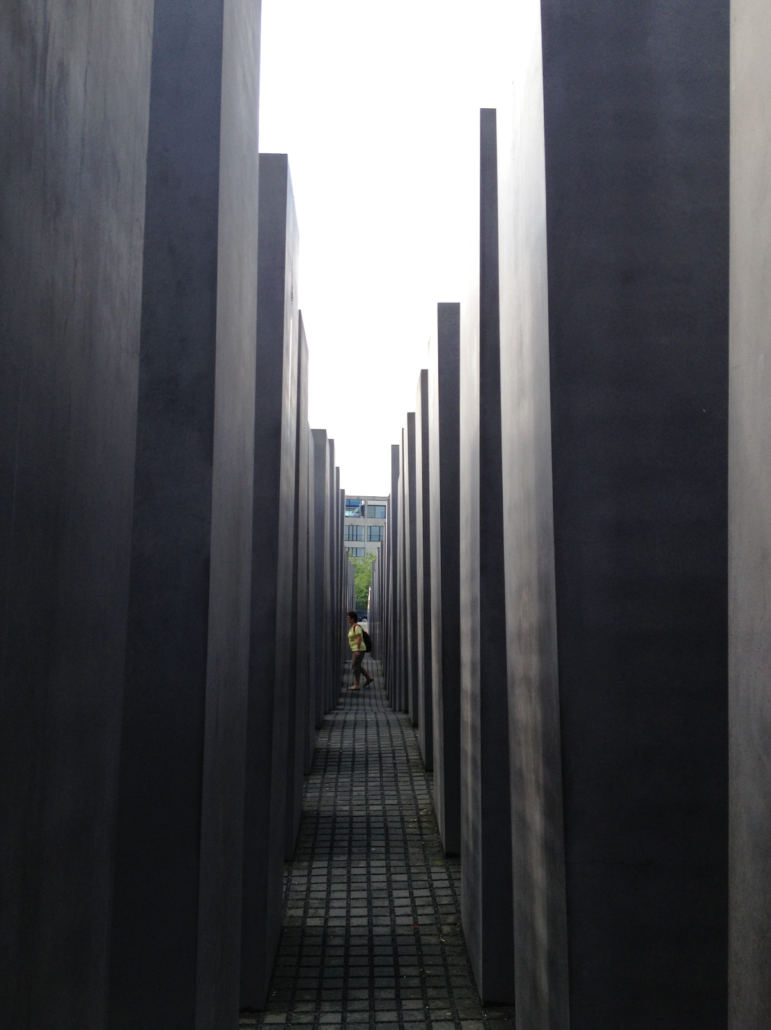 Inside the Holocaust memorial in Berlin, Germany. (Myah Guild/YJI)

Despite the most apocalyptic weather I’ve ever seen, we carried on, and made our way to the hostel, which was in the Eastern quarter. Their transport was quick, reliable, and, it seems, free.

Our first stop was the Holocaust memorial in the center of Berlin. An abstract selection of sculptures that resembles gravestones, it truly is a breathtaking sight.

You are able to walk between them and, as the ground lowers, the effect of the stones rising above you gives you a true sense of how many people were killed during the Holocaust. 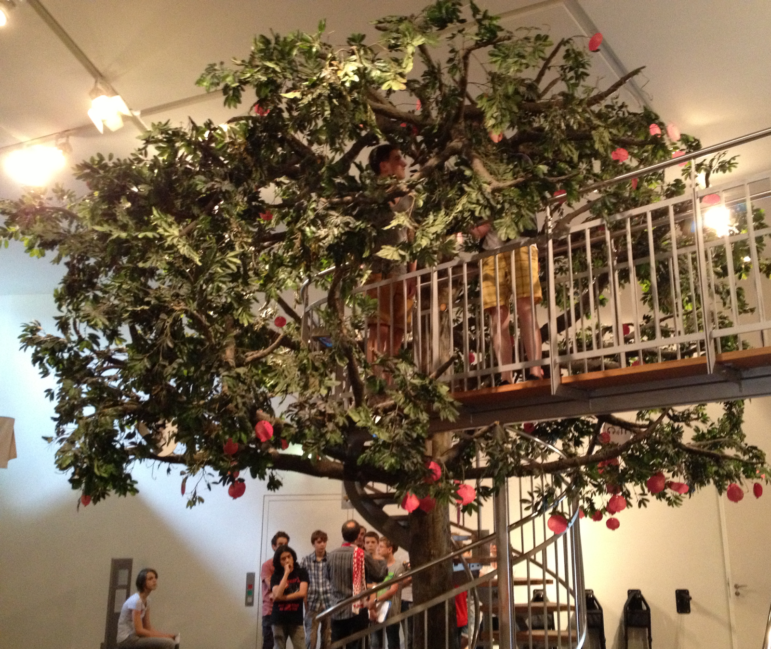 Inside the Jewish Museum in Berlin, visitors can write wishes and tuck them inside paper pomegranates. (Myah Guild/YJI)

Carrying on that theme, we decided to visit the Jewish Museum next, passing The Bundesrat state building on the way, as well as Checkpoint Charlie, the most famous crossing point in the Berlin Wall during the Cold War.

The Jewish Museum, which offers reduced discount for students, is another stunning building. The traditional entrance leads into a ‘deconstructivist’ design by architect Daniel Libeskind.

Inside, you can learn all about the history of the Jews in Germany, their persecution, especially in terms of the Second World War Holocaust, and see the belongings of Holocaust victims.

The whole museum was well done, and even included a tree upon which you could hang paper pomegranates (a traditional sacred fruit in the Jewish religion) with a wish written inside.

From there we headed to the East Side Gallery where you can see parts of the Berlin Wall, which divided Berlin during the Cold War, still intact. 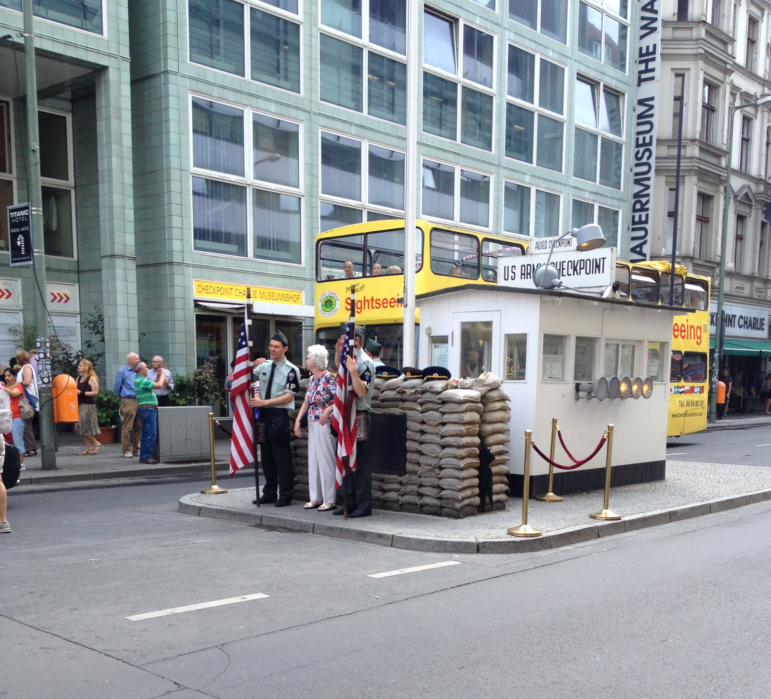 Checkpoint Charlie, the most famous passage in the old Berlin Wall. (Myah Guild/YJI)

It is quite amazing to be able to see a piece of history, particularly one which caused so much death and depression for an entire nation, right before your very eyes. You can even inscribe your name or a message on it if you want to.

After a very heavy day of history, we headed over the bridge to the ‘hippy’ area of town, where there are lots of bars and restaurants with foods from all over the world.

There were quite a few parks, so we were able to sit in one for a while before the heavens decided to open again. 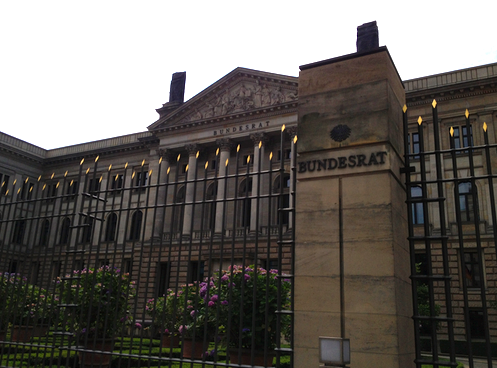 So, despite the occasionally inclement weather, Berlin was not a disappointment. For a city with a very turbulent history. it was buzzing. And rather than gloss over its past, it chooses to preserve and mark it, which is surely a feature to admire.

I would like to go back and find the location of Hitler’s bunker, and spend a bit more time in the city.

The people were very nice, the transport and food was very good, and the history of the place was everywhere you turned. A lifelong ambition achieved. 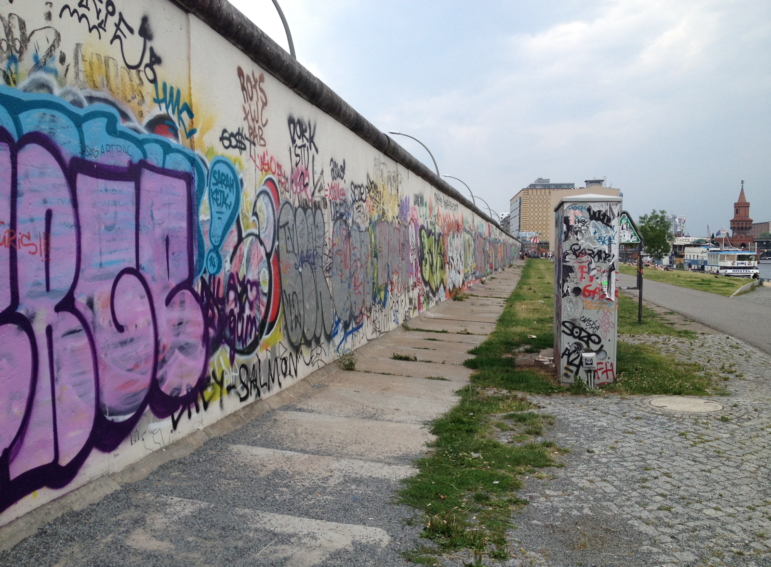 Myah Guild is a Senior Reporter for Youth Journalism International. Right and left are photos of the Berlin Wall. 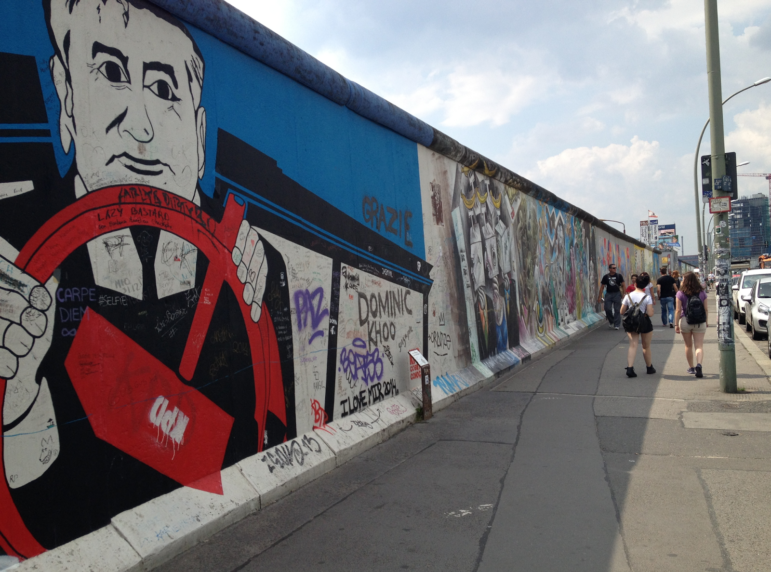 The entrance to the Jewish Museum in Berlin. (Myah Guild/YJI)