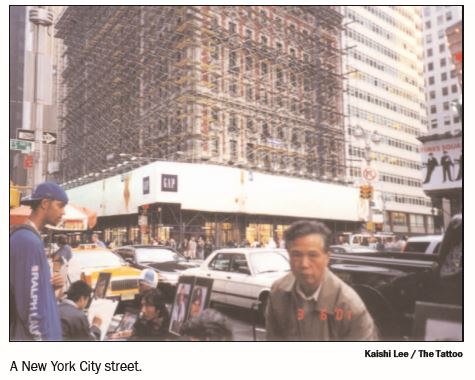 NEW YORK CITY — The Strand, pretzels, the subway, Macy’s, Bloomies….
That’s New York City, the Big Apple or Gotham — whatever you call it, it’s bustling, chaotic and cosmopolitan, the city that never sleeps.
There’s so much here and I truly love it.
New York is one fascinating place.

Everyone is always in a hurry, the parks are tranquil and the people greet you with “Howyadoin?”
The food is great and the traffic is crazy.
Just stop, look around and take it all in: eight million people hustling.
I strolled down Wall Street and glanced at corporate bigwigs rushing with The Wall Street Journal tucked under the crooks of their arms, saw mothers with angelic children playing at Central Park and was overwhelmed by the perfumes when I entered Saks Fifth Avenue.
Street carts are everywhere, selling just about everything.
Hot dogs, bagels and pretzels are staple food on the go, nasty taxi drivers are the norm and there’s no better way of getting around than your own two feet.
New York City is the most diverse place on earth, with people from almost any ethnic group you can think of having a sizeable community presence.
Enter Chinatown, then cross over to Little Italy and later Harlem and you find salesmen hawking three for $10 shirts with “New York City – Wild Child,” “Times Square” or anything distinctly New York.
Some of you have heard that New York is a dangerous city. But as long as you are alert, it is as safe as any country in the world. Trust me.
New York City is also synonymous with culture, whether it’s literature, painting, opera, film, jazz or pop music.
The Met was fabulous. I enjoyed viewing Jackie Kennedy’s gowns and standing in front of an original Van Gogh painting.
Watching “Proof” on Broadway was great. It told the story of a confused young woman, her brilliant father and manipulative sister, joined by an unexpected suitor in a search for truth behind a mysterious mathematical proof.
Staring at the flashing billboards on Times Square, I was awestruck.
Norman Rockwell, Bob Dylan, Mark Twain and Henry James lived in Greenwich Village. Louisa May Alcott wrote Little Women when she lived on Macdougal Street.
Playwright Edward Albee saw the words “Who’s Afraid of Virginia Woolf?” written in soap on a bathroom mirror on 10th Street and went on to write the classic play with that title.
Yes, rats scurry around the subway, beggars sleep on the streets, petty theft occurs and some people are rude.
If that happens, just roll your eyes, shake your head and say, “whatever!”