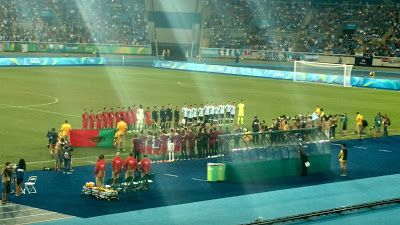 The men's football teams from Portugal and Argentina at the Olympic stadium in Rio de Janeiro Thursday. (Mariana Prince Cardoso/YJI)

RIO DE Janeiro, Brazil – The men’s football team from Portugal got a lot of local support in the second day of the Olympics as Brazilians united to cheer them on in their game against Brazil’s longstanding rival, Argentina.

The much-anticipated evening game was balanced at all times, but the Portuguese team managed to score two goals, while Argentina scored none.

After the first goal by Portugal, there was some confusion by the exit of the captain of the Portuguese team. The player, Sergio Oliveira, took too long to deliver the captain’s armband to another player and leave the field, which made the team take a yellow penalty card.

Fans in the stands reflected the traditional rivalry between Brazilians and Argentines. Many Argentines came to Rio de Janeiro, and most Brazilians was rooting for the European team – or rooting against the Argentine national team, as they say here in Brazil – which made the game very exciting. 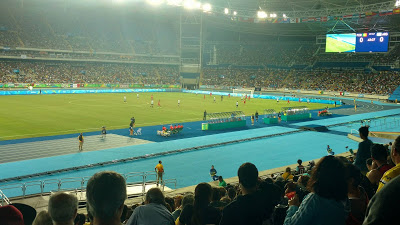 A moment from the men’s football game between Portugal and Argentina. (Mariana Prince Cardoso/YJI)

Despite the mutual provocations, no violence occurred inside the stadium.

Earlier Thursday afternoon, men’s football teams from Honduras and Algeria faced off.
In the first half, the Honduran team played better, but in the second half the game was balanced and very tight.
The crowd was divided between the two sides, which made the game exciting. Cheers and applause recurred throughout the match. The game ended with Honduras winning 3-2.
The Algerian goalkeeper failed to block two of the Honduran goals, so he had to be comforted by teammates at the end of the game. ***

Be a gold medal winner – support the students of
Youth Journalism International!
Your tax-deductible gifts make a huge difference to those
who rely on this nonprofit. Thank you!
HelpYJI.org