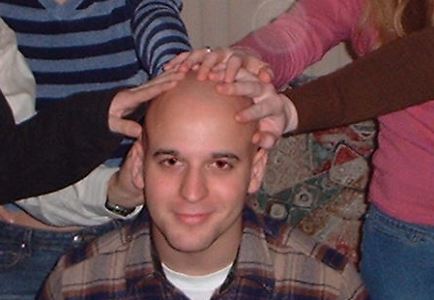 “I cannot call to mind a single instance where I have ever been irreverent, except toward the things which were sacred to other people.” – Mark Twain, author and journalist

When I joined The Tattoo I thought my writing could make people laugh long enough that they’d forget to ask anything more of me. Turned out I wasn’t that funny.
In the first piece of any substance I wrote, a Tattoo colleague and I made fun of the town’s teen beauty queens and got hate mail for weeks. In the second I was told to watch my language by an English teacher at my high school.
I wrote a lot about music and politics — which will almost always get you in trouble. But it seemed I ticked people off even when I was writing about school plays and doing movie reviews.
The Tattoo’s writers and advisors taught me that making peoples’ teeth grind isn’t always a bad thing — it means you’ve gotten under someone’s skin and maybe even made them think.
A box full of awards and a few thousand dollars in scholarship money later, I was running my college newspaper and paying the bills writing for daily newspapers.
Under my bed I keep a small box of “thank you” notes from people who’ve enjoyed my writing and found it worthwhile. My box of hate mail and death threats is so large I have to keep it in the closet.
I love them equally and wouldn’t have either without The Tattoo.

Joe Wilbur is a former Reporter for Youth Journalism International. He is now a junior at The University of North Carolina at Greensboro. He had hair when he wrote for The Tattoo from 1997 to 2000. He spent this summer as a staff writer for The Bristol Press and is a contributor to The Greensboro News and Record. He is also the editor of The Carolinian, his college’s newspaper. 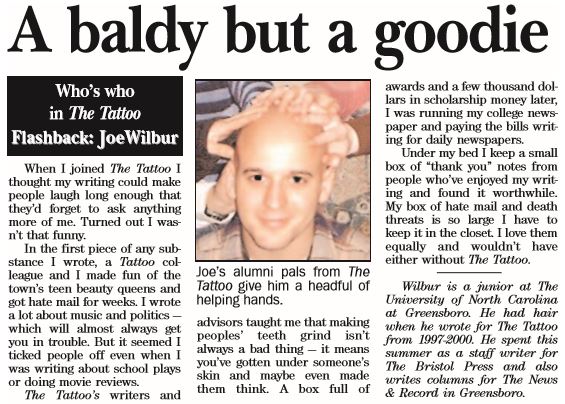