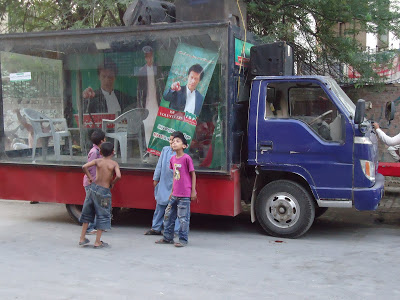 By Arooj Khalid
Reporter
Youth Journalism International
LAHORE, Pakistan – Imran Khan, the politician best suited to
be Pakistan’s next prime minister is the one who can make the country much
better. This glorious cricketer – produced by Pakistan – today kindles the
youth and fills their heart with patriotism and public spirit.

Khan, who led the Pakistani cricket team to win the nation’s
only cricket World Cup in 1992, is playing for bigger stakes today as the
founder and chairman of the Pakistan Tehreek-e-Insaf party, which means
Pakistan movement for justice.

After retirement from cricket, Khan’s devotion to social
work included founding the cancer hospital named for his mother, Shaukat Khanum Memorial Hospital & Research Centre
as well as other projects.
Since 2005, Khan has held the position of chancellor
at the University of Bradford in England.
Khan, who works tirelessly for his political party, has won
awards at home and abroad. He has two sons from his marriage to his ex-wife.
He inspires the youth of Pakistan. His policies are favored
by most of the Pakistanis, and his popularity shows that the absolute majority
votes of the population will go to PTI in next elections.
The ruling Pakistan Peoples Party and the Pakistan Muslim
League Nawaz have fallen in popularity since Khan’s party won over the nation’s
hearts in a big procession in Lahore.
Not long ago, a Khan campaign truck in Lahore showed posters
of the candidate and loud, patriotic party songs echoed around the street,
announcing in Urdu, “Come, be a member of
Tehreek-e-Insaf! Choose your leaders, yourself!”