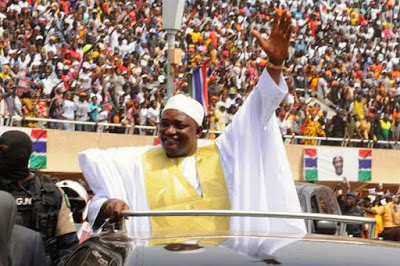 New Gambian President Adama Barrow waves to the crowd at the ceremonial swearing in event at Independence Stadium. (Abdoulie Jammeh/YJI)
Gambia – Citizens here are happy to welcome the nation’s new president, Adama Barrow, and merchants are hopeful that the change will mean better relations with neighboring Senegal.

Ousainou Sallah of Senegal, operates a shop in the large regional market in Serrekunda and spoke about when the border between the two nations was closed under former President Yahya Jammeh.

“It was not just about business but safety,” Sallah said. “Peace which can determine free movement of goods and people, too, and if that is not there, then both
countries will be at risk of endangering their citizens.” 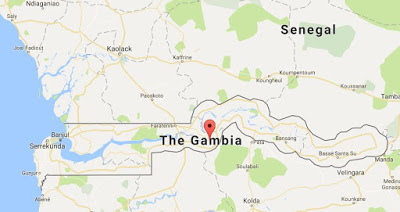 The country of Senegal borders The Gambia on all sides except for an Atlantic Ocean coastline. (Google Maps)

Geography plays a role.
“Senegal surrounds almost all parts of The Gambia except the coast and most of our goods are from there, said Momodou Baldeh, a Gambian who owns a shop in the same market. “So our governments must understand that we cannot be in a state of that kind. We are the same people and we can’t live without each other.” 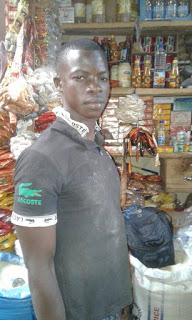 Gambian Momodou Baldeh standing next to his shop in the Serrekunda market. (Lama Jallow/YJI)

President Adama Barrow defeated Jammeh in a December 1 election, sparking joy in the streets. But the nation grew tense when the longtime ruler refused to leave last month when it came time for Barrow to take office.

Barrow fled to Senegal and was sworn in as president at the Gambian embassy and Jammeh finally left after African leaders intervened and troops from the Economic Community of West African states entered Gambia to remove him by force.
After Barrow took the oath of office at a low-key event in Senegal due to the political instability in Gambia, people packed a stadium to celebrate their country’s 52nd year of independence and witness the ceremonial swearing in of the new president.

African heads of state and other friends of The Gambia attended the Feb. 18 ceremony to witness the birth of a new nation after 22 years of dictatorship under Jammeh, who has since left the country.

President Macky Sall of Senegal, who along with the international community, played a major role in helping The Gambia remain stable during the difficult days after the election, spoke strongly of the need for a better relationship between the two countries. 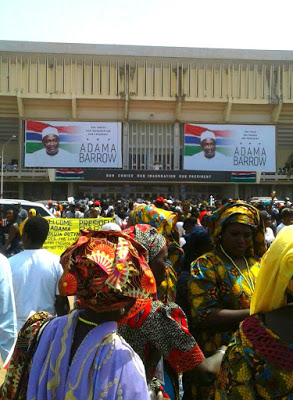 The crowd outside the stadium, where posters of the new president hang outside. (Lama Jallow/YJI)

“We are the same people, and we remain the same people,” Sall said.
Lamin K. Darboe, a schoolteacher at Sanchaba Sulay Jobe Primary, went to the ceremony at Independence Stadium in the Westfield section of the city of Serrekunda.
“The tyranny is gone, the dictator is gone,” said Darboe.
In his speech to the people at the Independence Day ceremony last week, talked about the need for unity, the economy and the desperations of Gambians to see a better nation.
“This is a victory for democracy,” he said.

Barrow elaborated on the challenges his government will face.

“We have inherited an economy in decline,” said Barrow. He promised to convince investors to invest in the country especially in the technology sector, to introduce free primary education and reinforce the judiciary.
Though the national election divided the country along ethnic lines, Barrow condemned tribalism.
“All the tribes are equal and it’s one Gambia, one nation,” strongly condemning any form of tribalism. “Long live the republic. Long live the Gambian people. Forward ever, backward never.” 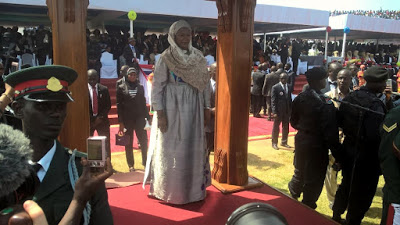 After his historic upset over Jammeh, Barrow is reversing other decisions by the former leader. Barrow has
freed political prisoners and returned The Gambia to the International Criminal
Court. And the process is underway for Gambia to re-enter the Commonwealth
after the former president cut ties last fall.

After more than two decades of dictatorship under Jammeh, the freedom Gambians so yearned for has arrived in a peaceful way.  Gambians in the Diaspora are already coming back home after some years in exile. Among them are journalists, musicians and
politicians. 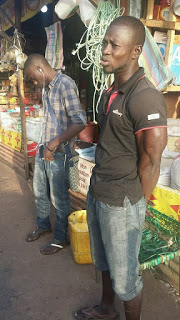 Ousainou Salla of Senegal,  in the foreground, at his shop in the market in The Gambia. (Lama Jallow/YJI)

Democracy appears to be good for business and family stability, too, according to the two shopkeepers from the Serrekunda market.

“My business, for example, was at risk, and if I am at risk, then my family is,” said Salla.

Baldeh said, “I hope and pray such things will not happen again. It was really tough for Gambians in particular, especially those who are poor.”
Those people couldn’t afford to keep paying expensive prices on goods, Baldeh said, and the prices kept on increasing every day.
With the closed border, Salla said he couldn’t send a good amount of money to help his family back in Senegal.
“I know it had bad effects on many families, too, from both countries,” said Salla. “So it’s not in any way good to see these two countries in bad terms. We are far from that.”
Baldeh praised the new leader.
“Barrow started well with the Senegalese government and I hope this will be a relationship that will stay forever,” Baldeh said.

With the election behind them, Gambians are expecting more from a different government that will support democracy and build a better Gambia. They want to see employment opportunities to stop Gambian youth from leaving for Europe on dangerous journeys over the Mediterranean Sea in search of work.

Whether Barrow and his cabinet can meet their expectations won’t be clear right away, but the new leader set a limit of just three years before Gambia’s next presidential election.

***
You can celebrate democracy by supporting the student writers and artists of YJI. Thanks for standing on the side of youth and truth!
HelpYJI.org