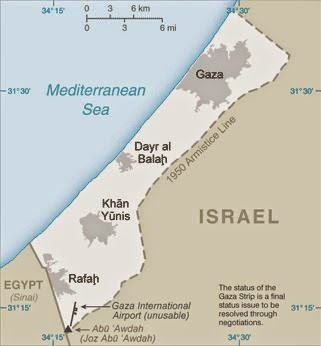 Map of Gaza from the U.S. Central Intelligence Agency.
KHANYOUNIS, Gaza Strip – After hearing the news about the humanitarian ceasefire, I cringed, reminiscing about what happened in the last ceasefire, which didn’t hold at all.
In the last ceasefire we returned to our home from the school where we’d stayed for three days after we had evacuated. Two hours later we had to run for our lives.

It was a nightmare. Everyone was running in the street, young and old, women and kids, all screaming and panicked. Most of them were barefoot.
That day I ran for more than a mile, carrying my heavy backpack and my three-month-old brother.  We ran
between the houses in a narrow, sandy street before we made it to the main street.
There were some cars that were carrying loads of people – you could barely see the car from all the people clutching onto it, like a man clutching at the floating wreckage of his ship.
So this time I didn’t want to get my hopes up, saying I will not believe it until it takes effect.
At night before the ceasefire, my mom and siblings were talking about their plans for what to do during the break in the fighting. The main activity for them and for most of the people of Gaza was SLEEPING.
After a month of sleepless nights, the ceasefire is a tempting time to relax our exhausted bodies.
Later that night we heard several strikes, but we knew that would happen. We understand and remember the routine of war like the back of our hands.
Whenever they announce a ceasefire, Israel usually makes another strike before it kicks in.
This time, they destroyed the most famous tower in Khanyounis, my city in the south of the Gaza Strip. That strike shook my house, leaving me out of breath and unable to move for several minutes. It was really close and scary.
I stayed up all night long, waiting for the clock to announce 8 a.m.  The clock hands moved heavily, as if they were holding a part of our burdens.
Tick-tock. It finally was 8 a.m. and I could sleep knowing that I wouldn’t wake up to the sound of explosions.
I slept for six hours for the first time in a month.

Most of the refugees went back to check their abandoned homes and were shocked by the amount of devastation. Residents came back to similar sights all over Gaza — rubble, ruins and buildings pockmarked by shrapnel.
Whole neighborhoods were demolished. My relatives returned to check their houses but there were no houses, just a blue sky and piles of stones.
People scaled crumbled concrete and twisted metal to rummage for any belongings left in the rubble.
Some people were so glad to return to their partially-destroyed houses after staying at schools under the burning sun of summer.
Other people felt it was an achievement to close their unbroken windows. They had kept them open all month so they wouldn’t be broken by nearby explosions. Many people had already started to repair and clean their houses.
I went to the market to get some supplies. We had suffered severely from food and water shortages in the last days and the market was really crowded. People were buying lots of food, candles, gas, mattress, medicines, milk and diapers for babies – everything they needed or might need in the coming days.
Although there was a decrease in supply, the prices didn’t rise sharply. I went to the pharmacy to buy my mom’s medicines. I bought enough to cover a month, just in case. I also bought some antibiotics, pain killers and flu medicines.
All of us in my house are suffering from flu although it’s summer. The pharmacist told me that most of the people in Gaza are suffering from flu, because of breathing the gases and dust from explosives.

I met some people I know while I was out. When I talked to them, they seemed depressed and pessimistic about the ceasefire. A friend told me even if this is going to be over and they signed an agreement, this won’t solve a thing.
It’s not about the war. It’s all about what happens after it. More than 10,000 houses were destroyed. Where are those people going to live – in the schools?
I don’t feel like life is even possible in Gaza, in this pile of rubble and ruins.
On my way home, I stopped to look at some kids who were playing in the street with the remains of some Israeli military equipment that was brought to the middle of the street.
The last time I heard about kids playing like this it was last week on the news. There was a report from the Al-Shatee refugee camp in the north of the Gaza Strip. Children were targeted in a park, and eight were killed on the playground that day.
So it became a rare sight here to see children outside, having fun.
But seeing kids playing on Tuesday gave me hope. It made me feel it’s going to be all right and that we have to stay strong and stand the strain for them, that we should rebuild Gaza quickly for them. They don’t deserve to be this sad. 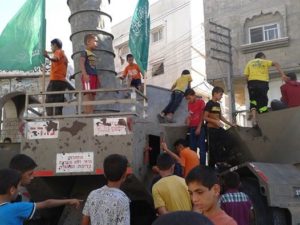 Children in Khanyounis, a city in the southern part of the Gaza Strip, play on some military equipment left in the road in the center of town. (Rewaa Al-Najjar/YJI)

Many people went to visit their dead loved ones in the graveyards, asking, why did they leave them alone? How could they just leave?
Medical people pulled more bodies from the rubble here and some people even got out alive after being buried under the ruins for days. It was a miracle.
The search for bodies continues. Lots of bulldozers started to work cleaning rubble from the streets so cars can move.  Workers from the electric company began connecting the power to the devastated areas and the power came on in some places for the first time in days and weeks.
Israeli aircraft are still flying over Gaza. It’s like holding a gun to someone’s head, but not pulling trigger. The noisy drones haven’t left the sky since the first day of the aggression. They are buzzing and buzzing, as if there are some bees trapped in your head. The sound is really horrible, causing a massive headache. Even painkillers are useless.

Will the ceasefire hold?

After a month of aggression you don’t think much of a ceasefire. Whether it will hold or not is never the question because honestly we are all pessimistic about it. It’s a humanitarian ceasefire to evaluate the loss of life, but what does that mean to someone who lost a home, a son or a family?
What will it mean to the grief-stricken kids?
We don’t want any temporary solutions. We want this nightmare to end. We want to wake up and start the long healing process.
After the first day of the ceasefire, the size and images of the catastrophe are getting clearer, but no one knows what the coming two days will bring us.

It’s just the end of the beginning.

There is some news about a near settlement between the resistance and Israel, that they are moving well in the negotiations. Will the dawn break soon?
The war is something, and what comes after it is a whole different – and new – chapter of suffering. How can we deal with it? Are we going to make it through? How fast can we work to rebuild Gaza?
Will we have all the needed donations? Will children be able to keep going to school? Where will the homeless people stay?  There are not enough houses to rent. How will the world and the humanitarian relief organizations react? Where are we heading?
Hundreds of questions are rambling on my mind, leaving me confused. Yet I am waiting eagerly to know how things are going to be in the near future, if I survive to see it.
Dalia Al-Najjar is a Junior Reporter with Youth Journalism International.