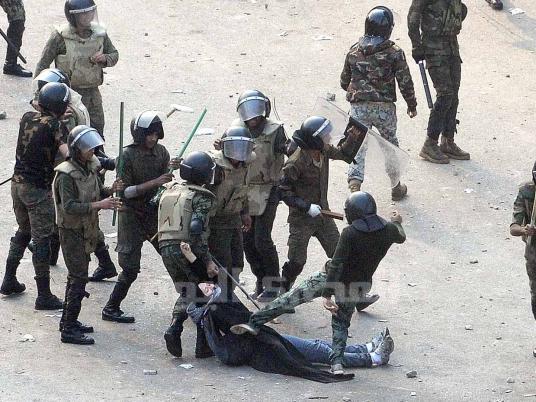 COLUMBUS, Ohio, U.S.A. – In recent weeks, Egyptian soldiers beat, dragged, humiliated and tortured women protesters on the streets of Cairo. One of them, now known as the girl with the blue bra, could have been me.

She was viciously attacked by soldiers who stripped her clothing away, stomped on her chest, beat and kicked her.
This would have been treated by the media as another case of violence against demonstrators and a new demonstration against the military would have followed, but someone captured the scene with a video camera, making the appalling truth clear for all to see.

Sometimes I imagine that the woman being beaten with what looks like a million clubs from a million police officers is someone I know. It is hard not to get personal. She looks like someone I know. She looks like me.
This woman, dressed in a full veil, was called a slut by power hungry politicians who favor the Supreme Council for Armed Forces, Egypt’s military rulers.
The video of her attack infuriated women and men of Egypt and the world. For a woman to be undressed this way is not accepted in Egypt or anywhere, with soldiers of her own people stepping on her and scarring her dignity.
But the only one left truly undignified and undressed was SCAF.
This woman, known on Twitter as the girl with the blue bra, is Egypt’s symbol of nobility and honor. In fact, she is the most honored of Egyptian women.
The unforgettable video of the assault on that woman prompted many more women to take to the streets in protest and now the women of Egypt have subtly started a movement with their marches.
On December 20, 10,000 women marched in Cairo. They protested against the SCAF and to defend the honor of that woman, an honor that was only intensified by her feat. A great many of
these women had never protested before this day and took to the streets in order to show support and solidarity and show the world they are not a silenced, home-staying element of society.
What isn’t apparent on the surface is how these women changed views and shocked people everywhere.  Another video on YouTube showed the world the strength and determination of the women of Egypt. In it, a multitude of women of all ages and from all sectors of Egyptian life, are seen marching an chanting in the streets. Their angry response shows an attack on one woman was seen as an attack on all of them.
The feminist in everyone came to the surface and finally spoke. The conversation about women, their vital role and their equal role to men in the revolution means a great deal for Egypt.
Only yesterday, Egypt made forced virginity tests for women illegal. Even with this glimpse of hope, there is much struggle. As more and more people see the youth of Egypt being killed daily and no progress, lack of security and a dictatorship style military, a large number of Egyptians have lost hope.
What was done to women in Cairo’s Tahrir Square is by no means acceptable. It was horrific, barbaric and inhumane. It is the kind of thing the martyrs of January died in order for it to never happen again.
As the world’s media filled up with images of the woman in the blue bra, I think about the many others that were beaten in Tahrir without a camera to capture them. SCAF has proven by their actions that they are not suited to be in control of Egypt, even if temporarily.
The women of Egypt are louder today than ever. They organize, they speak and they do. Empowerment comes through the belief that you are free, not in the laws that govern your freedom.
The women of Egypt, young and old, prove this and the struggle continues.
Jessica Elsayed, from Alexandria, Egypt, is a freshman at Denison University. She is also a Senior Reporter for Youth Journalism International.