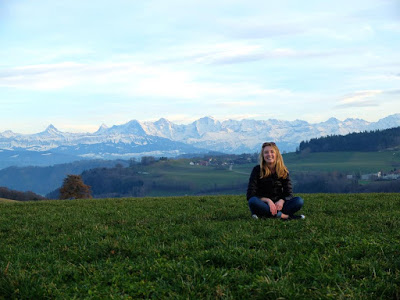 Shelby Saunders, a 21-year-old rising senior studying international relations and music at Colgate University, is YJI’s summer intern lending her expertise to its social media presence and other work to showcase the worldwide reach of its student writers.
“We’re thrilled to have Shelby on the team,” said YJI Executive Director Jackie Majerus. “She’s smart, intuitive and fun to work with. She’s really making a difference.”
While studying abroad in Geneva, Switzerland last spring, Saunders took international relations classes focusing on global governance and diplomacy, and honed her
French language skills while interning with the International Organization for Migration.
In Geneva, she worked with the media and communications team at the International Organization for Migration’s headquarters to highlight migration as a benefit to all.
A primary focus was the “I Am A Migrant” campaign, which increases awareness of the struggles and success stories of migrants around the world.
As a migrant herself in Europe, Saunders took every opportunity to travel within Europe and the Middle East, crossing 15 countries off her bucket list.
“I’m passionate about global human rights issues, specifically women’s rights,” said Saunders, “and I really support YJI’s goal to empower students everywhere.”
Born and raised in West Hartford, Saunders attended Hall High School where she pursued music, lacrosse, and developed a love for history and English.
“Shelby’s wide range of interests and knowledge have helped her tackle some of our longstanding projects with a new perspective,” said Steve Collins, YJI president. “She’s a valuable addition.”
***
You can make a contribution, that supports YJI’s students, too.
Make your tax-deductible contribution at HelpYJI.org.
Thank you!