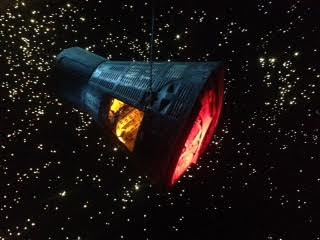 At the Space Center in Houston a display designed to show what a space vehicle might look like as it is hurtling through space. (Mughda Gurram/YJI)
HOUSTON, Texas, U.SA. – Space, the final frontier. These are the voyages of the Apollo rockets.

Stepping into the Space Center, a space-oriented museum connected to the Johnson Space Center in Houston, visitors get a glimpse into these space missions and more.
From a variety of movies, to the various interactive exhibits, people get an in depth look at NASA’s work in space, including the science, technology, and people behind it.
Exhibits show off mock-ups of vehicles such as the Orbiter, space suits worn by astronauts during various space missions, and collections of lunar dust and a
moon rock visitors can touch.
There is a show that uses an audience volunteer to demonstrate how astronauts live in the space station, using a mock-up of the space station. 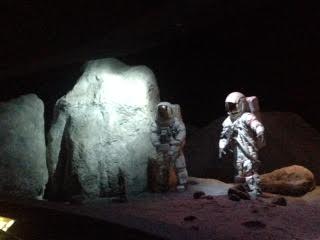 Exhibits at the Space Center include space suits actually worn in space and re-create scenes so visitors can imagine what astronauts actually did in space. (Mughda Gurram/YJI)

The center also has rides that simulate what it’s like to be on a space mission, which seemed very popular among the kids visiting.
While some of the activities are obviously geared towards younger visitors, such as the “How to train like an astronaut” exhibit and the fairly large play area, the center has something for people of all ages.
One of the most interesting aspects of the Space Center museum is the fact that it offers access to where the magic happens.
Tram tours take visitors to the Johnson Space Center and offer a look into places like the Space Vehicle Mockup Facility, where astronauts train to use the machines up in space, and NASA’s Building 17, where they develop and test space food. These tours offer people a one-of-a-kind chance to see the actual facilities that astronauts and NASA employees use to prepare for space. 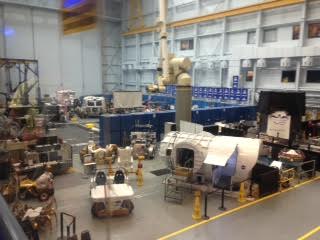 The space vehicle mockup facility, where astronauts come to practice using real equipment they might use in space. (Mughda Gurram/YJI)

I had a chance to hear astronaut Kenneth D. Cameron speak about the three shuttle missions he was a part of, and the opportunities he had to help secure a good relationship between the United States and Russia when they were combining their efforts in space. He joked that what really sealed the deal was the U.S. team bringing ice cream up to the Russian space station.
Cameron emphasized the importance of teamwork.
“In order to build a space station, first you have to build a team that can build it,” he said.
Working cooperatively is crucial, according to Cameron.
“We have built an amazing machine up in space. But we built an even better team that built that machine,” said Cameron. “In the end, it’s the team that carries it through.”
The Center also pays tribute to the teams lost in the Challenger and Columbia space missions, in an exhibit and in a memorial of trees visible from the tram tours.
The Space Center is a definite must for anyone who enjoys learning about the vast universe, the astronauts who explore it, and the technology that brings them there.
Mugdha Gurram is a Senior Reporter for Youth Journalism International. 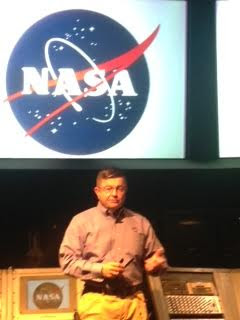 ***
You can support young journalists who are out of this world with
your tax-deductible donation to Youth Journalism International.
Make a difference in your galaxy today!
HelpYJI.org 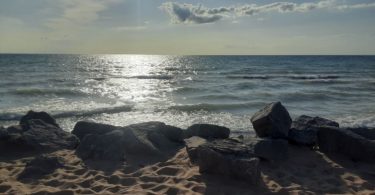