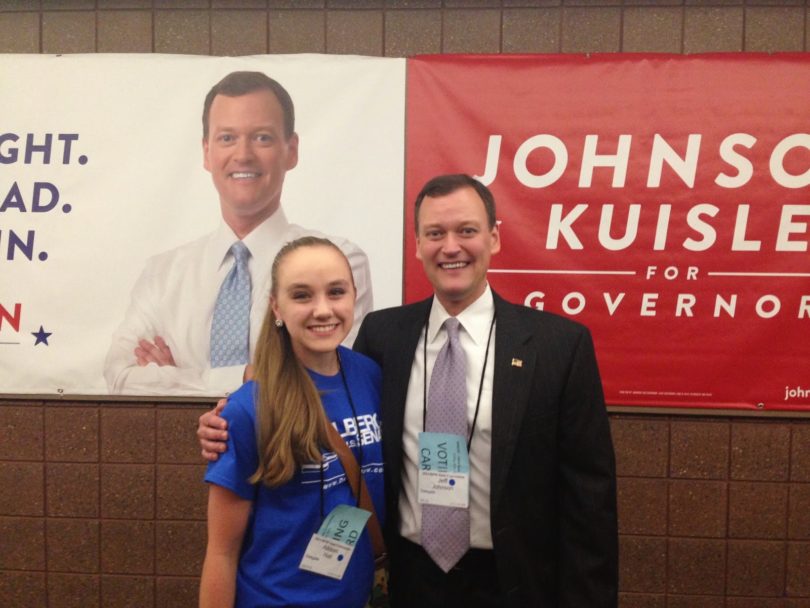 YJI Reporter Allison Hall with Minnesota's endorsed Republican candidate for governor, Jeff Johnson. (YJI)
ROCHESTER, Minnesota, U.S.A. – I’ve learned about American government and politics in school, but last month, as the youngest delegate at the Minnesota Republican state convention, I got hands-on experience that can’t be taught in a classroom.

Those two days at the Rochester Civic Center at the end of May taught me so much more about how the process works and what being a delegate truly entails.

As the delegate for House District 7A – from my hometown of Duluth – I got to know candidates for state auditor, secretary of state, attorney general, governor and United States senator.
Delegates also create and pass resolutions to the Republican Party’s platform and finally, the most exciting part, vote for the candidates.
At first I was hesitant to attend for two reasons. First, the convention took place the weekend before my finals for school – I study a lot – so going to the convention would mean less time to prepare for exams.
The second reason was that out of more than 2,000 delegates, I would be the youngest person there and it would be my first time as a delegate.

I attended the national GOP convention in 2012, but I was just a guest, so I wasn’t able to become super involved. The state convention would be my chance to experience the endorsement process hands-on.
After realizing what an awesome opportunity this would be for me, I took a leap of faith and planned my trip to Rochester.
I don’t want to undermine the importance of any of the offices but the most popular endorsements of the convention are for the U.S. Senate endorsement and the endorsement for state governor.
The Senate candidates were Jim Abeler, Phillip Parrish, Monti Moreno, Julianne Ortman, Chris Dahlberg and Mike McFadden. The leading candidates for governor were Marty Seifert, Dave Thompson and Jeff Johnson. 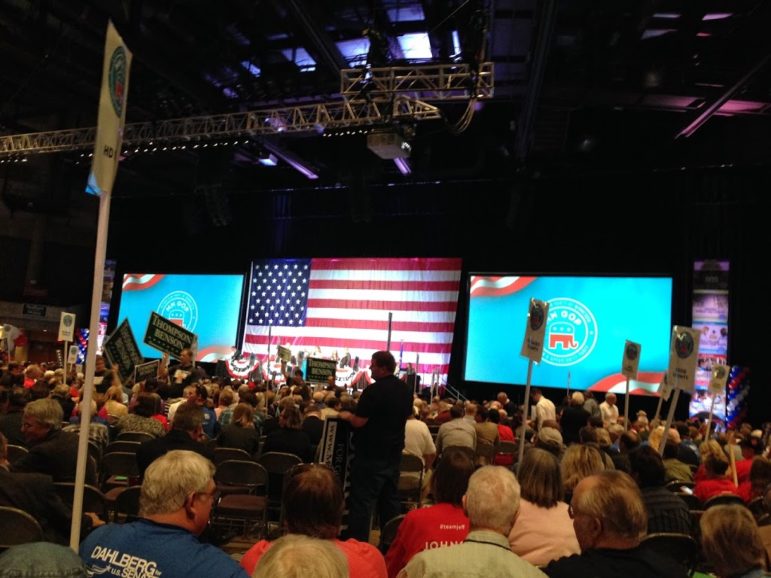 The Mayo Civic Center in Rochester, Minnesota, decorated for the state Republican convention, held there May 30-31. (YJI)

I woke up early Friday morning and made my way to the Rochester Civic Center. I registered and headed to the arena.

As I took my first few steps into the front entrance I was excited and ready to go. There were stands everywhere with people passing out stickers, t-shirts, buttons and more.
I knew ahead of time that several of the politicians would approach delegates and try to convince them to vote for him or her and that is exactly how it was.
Many of the candidates were very friendly, making it impossible at that point to decide which people I would vote for. 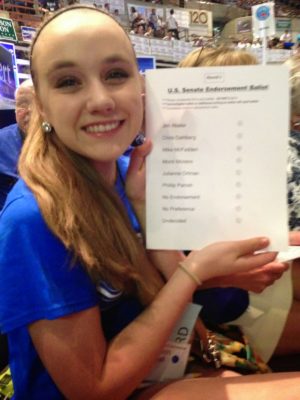 After an hour of waiting around in the convention center, the speeches for the U.S. Senate candidates began. It was great to hear them speak and get to know their stand on various issues our country is struggling with.

All of the candidates were wonderful and to be honest, any one of them would have been a great opponent. But we needed to choose one candidate to endorse and throw our support behind, so after the speeches, the voting began.

All the campaign staffers were asked to leave the floor and delegates took their seats and were handed their ballots. Dahlberg took the lead, surprisingly, and remained in the lead until the last ballot.
Dahlberg was my first choice. Not only was he experienced, but he had what it would take to win the North Eastern precincts in Minnesota.
To select a candidate to endorse, delegates will normally have to go through a few ballots, but this convention was different.
We went through 10 ballots and were at the convention center from 10 a.m. to 2 a.m. Keep in mind the majority of the delegates are over the age of 50, so by midnight, the energy began to die.
Of course like any other teenager would do, I started running around the arena chanting “Dahlberg” and talking to various people about why they should switch their vote to Dahlberg. My goal was to keep the energy going so that no one would leave and so Dahlberg wouldn’t start losing support. 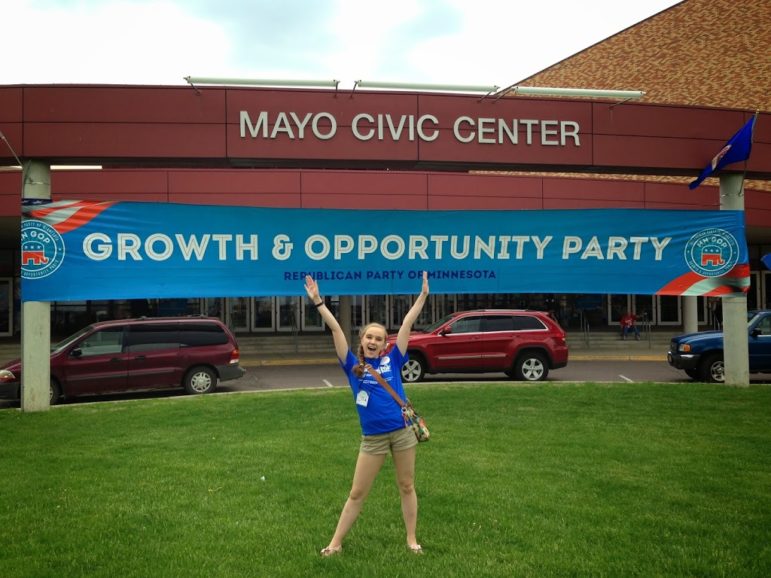 Allison Hall takes a break from the convention to get some fresh air. (YJI)

As the youngest delegate there, I attracted a lot of attention. I got a lot of, “You go, girl” and “We need more kids involved in this kind of stuff, we’re proud of you.”
As the night dragged on, people got sleepy, so at 2 a.m., we made an amendment to the rules so that we could recess for the night and continue our voting in the morning. The amendment went through, and people got the sleep they needed. 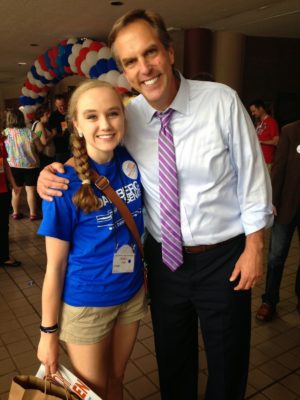 When we returned bright and early the following morning, McFadden ended up taking the lead and becoming our endorsed candidate. I was somewhat disappointed, but knew that McFadden would also be an excellent U.S. Senate candidate for our party.
The ballot for governor didn’t last nearly as long, but was a fun day as well. Johnson, who is a Hennepin County commissioner and a former state representative, became the endorsed candidate, which was exciting for me because he had my support from the start.
I’m so lucky to have had the opportunity to be a delegate.
It opened my eyes even more to the world of politics and grabbed my interest. The most frequent thing I heard when people saw I was a delegate was, “We need more youth involved in this.”
I completely agree. These decisions being made don’t only affect adults, they affect kids, too.
It’s important for kids to inform themselves about our country’s politics so when they are older they can be contributing members of society and help make decisions about how the government handles the issues that will affect them.
Attending this convention as a delegate was one of the most rewarding experiences I have ever had. I hope that my experience will inspire other young students to reach out and become more involved in politics so that we have a say in our country’s future.
Allison Hall is a Reporter for Youth Journalism International.