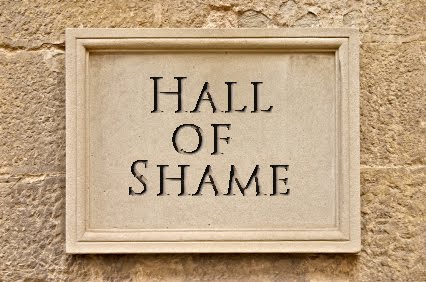 The St. Francis High School newspaper, The Crier, this week has a big blue box on its front page with these words listed inside: “Originally a photo was to be placed here, but was censored by the administration.”

The Anoka County, Minnesota paper had planned to run a picture from a school play that appeared to show the destruction of an American flag, though it was really only bunting.
In the picture, which the St. Paul Pioneer Press published on its website, actress Becca Bennett can be seen holding the red, white and blue bunting in shreds, from a scene meant to depict “how a country could be torn apart by affecting the youth.”
It’s actually a pretty good photograph.
As the Pioneer Press reports: “According to a front-page article written by Editor in Chief Eric Sheforgen, who also took the picture, as well as an editorial in the paper and a statement made today by the editorial board, Principal Paul Neubauer threatened the paper with legal action and froze its funds after the paper gave him a heads-up that they were planning to run it.”
Neubauer, like sissy principals everywhere, dodged the Pioneer Press reporter who tried to get him to explain his actions.
But the school superintendent, Ed Saxton, told the paper the photo was “like a quote being taken out of context.”
“That particular picture, although it’s a snapshot of what was in the fall play, standing in isolation, it could be taken in many different ways. It could be pretty offensive to veterans or people who served in the military. It’s kind of a community standards thing,” Saxton said.
What’s especially amazing about this censorship is that the district actually has a pretty good policy on this sort of thing. It reads, “Official school publications are free from prior restraint by officials except as provided by law.”
That makes it, by law, an open forum that school administrators can’t touch.
So St. Francis High School has the right policy. It just has the wrong principal – and the district has the wrong superintendent.
What’s important to “veterans and people who served in the military” is that America remains free. That’s why they fought and that’s why so many have died on so many battlefields across the globe.
They didn’t sacrifice so that Neubauer and other censorious jerks could treat our freedom as if it were a dirty napkin to be tossed in the trash can.
But let’s give Neubauer and Saxton some credit. It’s not every day that school administrators earn a spot in our Halls of Shame, but today, this pair of doozies made the cut. Congratulations, guys!