Ka’anapali, Hawaii — You can’t beat the paradise of Hawaii.
My family’s taken many great vacations over the years, but our trip to Hawaii – filled with spectacular sights and exhilarating experiences– topped them all. From the views off 500 ft. cliffs overlooking water, parasailing 800 ft. in the air and catching a wave in Maui’s surf, Hawaii was an awesome experience.
Instead of island hopping like some travelers, we chose to remain on Maui for the duration of our stay. Besides the fact that it costs an arm, a leg, and a few toes for a family of six to catch a flight every few days, we heard that Maui was the most authentic island of them all. We weren’t disappointed. 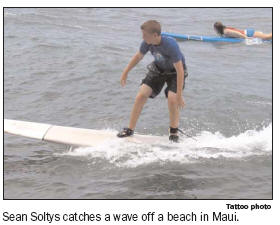 Sean Soltys is a Reporter for Youth Journalism International.