PITTSBURGH, Penn., U.S.A. – When I arrived at school today, it was just another Wednesday. I had to finish my statistics homework during chemistry, and I was looking forward to talking with my friend during English about the guy she’s been seeing.
But the first thing I heard when I walked into homeroom was “Oh my God, did you hear about the stabbing at Franklin?”

I don’t know if there’s a worse sentence to start off your day.
At Franklin Regional High School in Murrysville, Pennsylvania, this morning, a 16-year-old sophomore went from classroom to classroom, stabbing and cutting a total of 19 students and a security guard, according to a report on the regional Trib Total Media website.
Twelve of the victims are being treated at various hospitals within the University of Pittsburgh Medical Center network, and as of later afternoon Wednesday, three of the patients are in critical condition.
It’s a terrifying situation, and one that’s hit far too close to home. The school is just a half an hour from my own, and as a result, I know a few people who attend.

Very luckily, they’re all unharmed, just incredibly shaken up. This is the sort of thing that never seems to happen nearby. I’ve only ever heard about incidents such as these on the news, or as part of an argument for metal detectors in schools. 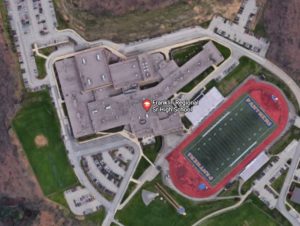 In stark contrast, my phone has been blowing up with live updates and concerned texts from family members who saw “Pennsylvania high school” and panicked.
The atmosphere at school was noticeably different today as well, much less light-hearted. The ‘promposals’ looked phoned in, a fight broke out over nothing, and the halls weren’t as mind-numbingly loud as usual.
All my friends and I could think about was how easily this could have happened to our school.
In these sorts of situations, the public often hears about the attacker’s hidden mental illness, or about the bullying he or she endured for several years. Students like this are often named as loners within their school, kids who had few friends to lean on.
Many at my school could name several classmates who fit that profile, but I can’t imagine any of them being capable of such violence.
There are always going to be people who don’t mesh well with the masses, for sure, and there’s nothing wrong with that. But there’s a big difference between eating lunch alone and the horrific acts that took place today.
I don’t know if anyone at my school will change their attitude, though that would be the expected and ideal action.
I think it might take some time for this to truly sink in. When it comes down to it, the situation is just shocking and sad.
Many of the local religious groups will be holding prayer services, and the school in Murrysville is closing down for the next few days.
This situation will be in the hearts of the students at my school and surrounding ones for a very long time, and we can only imagine how the victims and their families must feel.
But it does seem that a few heroic students and faculty minimized the amount of damage that took place.
A local television news report on WPXI mentioned that one girl applied pressure to her friend’s wound until the ambulances arrived, probably saving her life. Another student reportedly pulled the fire alarm and yelled for everyone to clear out of the building, and there’s no doubt that his actions saved many others from being sitting ducks.
It’s wonderful to be reminded of the good that can be found in such a horrific situation.
Katherine Holland is a Reporter for Youth Journalism International.