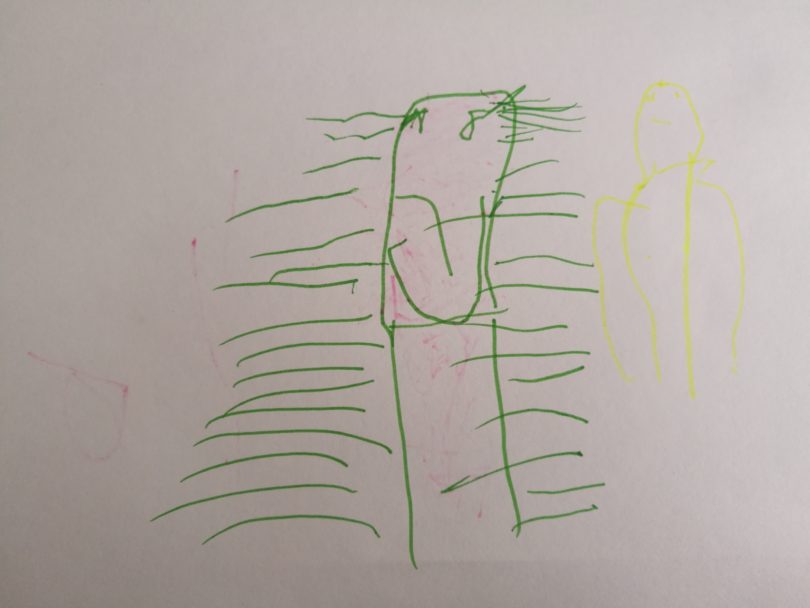 The covid monster, as drawn by Hazem Amrou. Used with permission.

Suffolk, Virginia, U.S.A. – Toddlers and preschoolers are a force to be reckoned with. Perhaps the loudest and most demanding of the age groups, their presence in a room demands attention and respect.

But they tend to be the least vocal when it comes to reacting to significant world events.

Most people might pin it on the fact that they’re young, or they just don’t understand. Though these factors certainly play a role, we often don’t realize that these children are far more perceptive than they let on. They are fully capable of synthesizing their ideas and drawing intelligent conclusions from their observations, albeit often in a more imaginative way than older age groups.

The thought process of children this age is a bit enigmatic. Despite the fact that it is a universal experience, being a toddler or a preschooler retains a certain mystery to it in the eyes of an older person, because we often can’t clearly remember the details of being that age. And since we aren’t really certain of everything that’s going on in the heads of such young children, it can all seem a bit irrelevant.

This has most recently cropped up in the midst of the havoc that the covid-19 pandemic has wrought upon the world. We are disappointed for the high school seniors who have had important events canceled, we fear for the elderly who are at a higher risk, we empathize with the uncertainty and anxiety that the sudden change in routine and circumstances has brought upon youth and adults.

Perhaps one of the most astounding things about this entire situation is how universal it is – how all of humanity, no matter the nationality, culture, or any other identity, is going through this together.

Yet despite this, we have not paid much regard to the thoughts of our youngest children, and how exactly this experience is shaping their minds and view of the world.

Admittedly, I hadn’t considered it either, up until my brother took the initiative to show us just what he was thinking.

As the youngest of four kids, Hazem, who just turned four, is simultaneously observant and expressive, picking up on the vocabulary and topics he hears us discussing and incorporating them into his own speech, from the latest memes to the coronavirus.

The virus has definitely taken up a space in his mind. It has also had its impact on his own routine.

Though he has yet to attend school, he is fond of visiting the library and the local children’s museum. But these places have been closed to the public, a fact that did not sit well with him at all at the start. We would tell him that his favorite spots were closed because of covid-19. That, along with the discussion on news channels and our own talk of the rising number of cases and the death tolls, soon made him realize that we had a dangerous situation on our hands.

His concerns had a different foundation, however. Where we saw – or rather, didn’t see – a highly contagious virus, Hazem’s imagination had him see a monster.

Assuming from his constantly changing descriptions of it, this monster possessed shapeshifting abilities. Initially, it seemed to bear an uncanny resemblance to spiders, with multiple limbs and eyes.

Over time, the monster’s appearance has been influenced by other factors, such as well-known models of the virus (he now imagines it to be green) and Minecraft mobs, such as creepers and endermen, which have inspired the shape of its body.

His latest interpretation portrays the covid monster with a rectangular head and torso lightly shaded in pink, two very thin legs, two eyes, a face that is simultaneously smiling and frowning, and a scary number of arms – all of which are outlined in dark green. 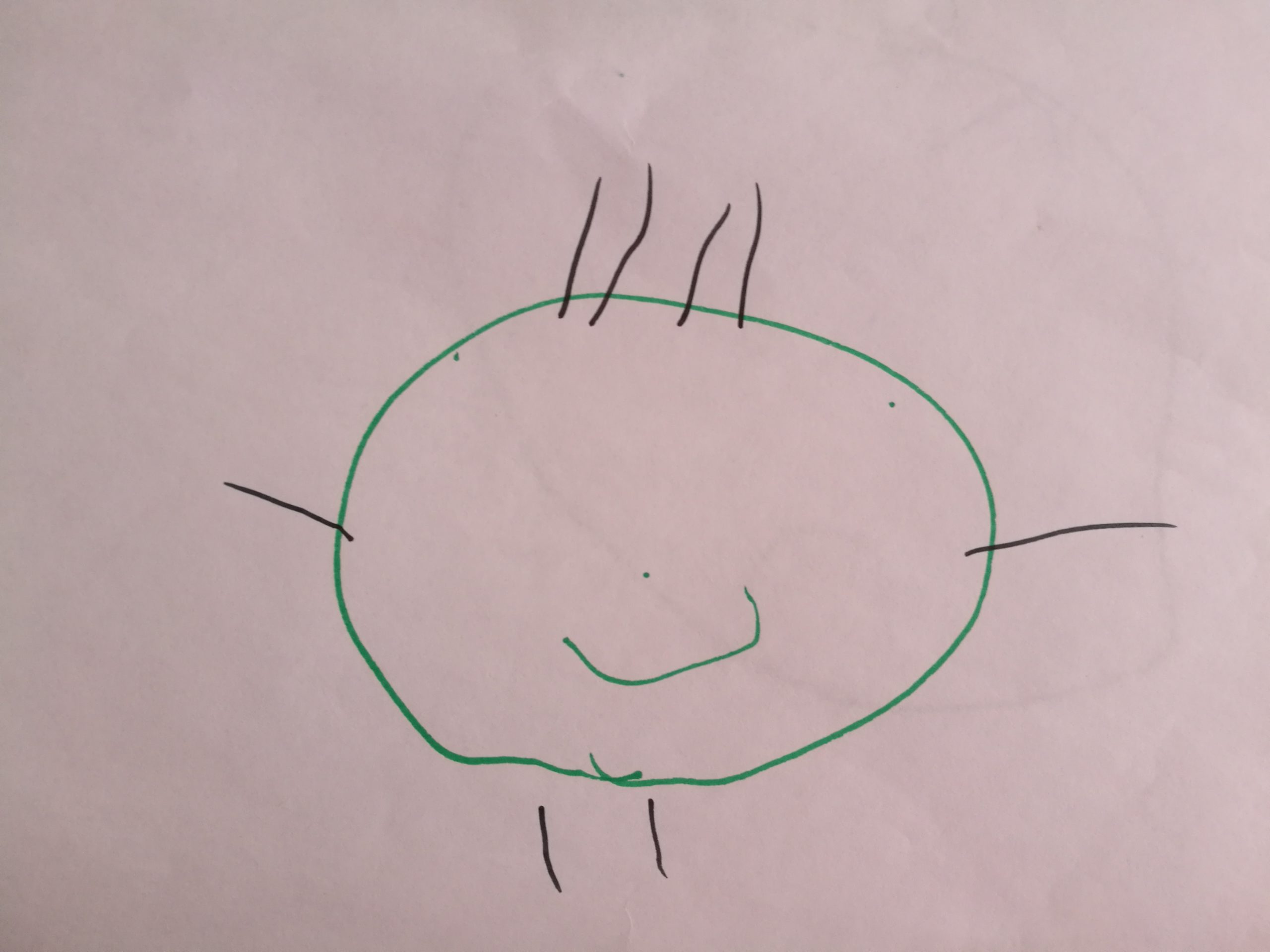 This is all aside from the random comments he would say throughout the day. He would mention that covid is scaring and hurting the people – and one of us would say yes, it is, and that’s why we have to stay inside.

Then, he randomly began voicing his desire to defeat the monster, saying things such as “I want to put covid-19 down,” “I want to break his teeth,” and with more alarming certainty, “I will break covid-19’s legs” or “I will kill covid-19.”

After all, this was the monster who was preventing him from going outside, a very grave sin in the books of a three or four-year-old. (He’d also been playing a bit too much Minecraft.) 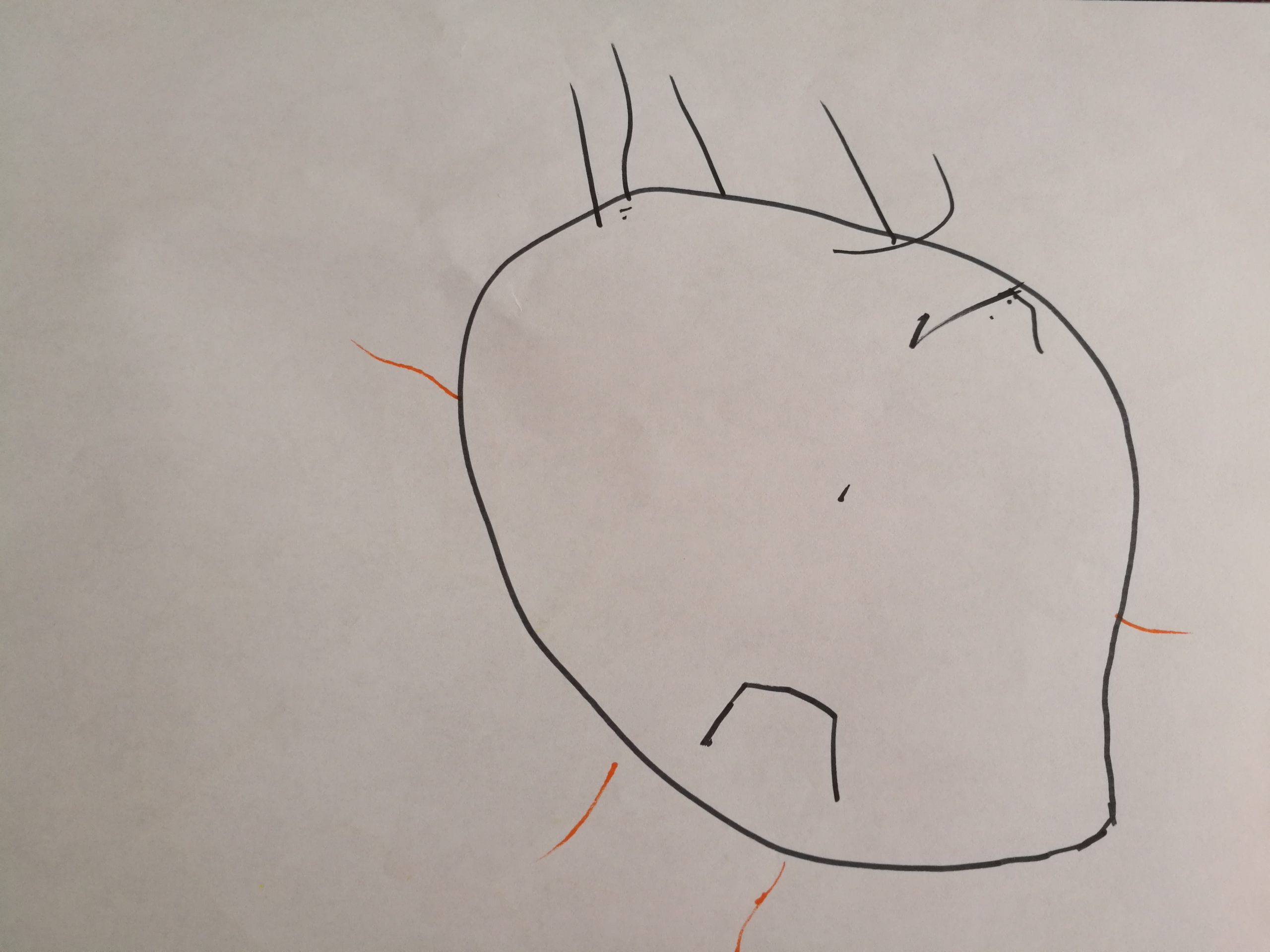 Interestingly, he didn’t seem particularly afraid or emotional when saying these things. But we discovered that he felt a decent amount of fear towards this monster at one point. It was nighttime, and my dad was about to go take out the trash. Seeing my dad open the front door, Hazem panicked, and practically shouted at him not to go outside so that covid wouldn’t get him.

Though all of his prior expressions about COVID had been amusing and entertaining to some extent, this particular moment was anything but funny, because the fear in his voice felt almost tangible.

Despite the idea that children of his age seem to be unconcerned with any affairs besides their own, his outburst had shown me just how affected and overwhelmed he was by it all. He is essentially a young, innocent child watching the world around him burn – in more ways than one – and with a vast imagination to spice it up.

In retrospect, I find it crazy that a three-year-old was more cautious and wary than some adults, as shown by those who refuse to follow social distancing guidelines or wear a mask.

It really makes you question the whole idea that age is an indicator of wisdom or maturity, as in this case, it can be the complete opposite.

Most of all, it was heartbreaking to see someone so young carrying the weight of such anxiety on their shoulders. It made me realize just how blissful my own childhood was.

Since then, Hazem hasn’t had any similar moments, but his imagining of covid has become a bit more nuanced. He now sees it possessing a wide range of emotions. In previous versions of the monster, he would draw multiple covids with varying expressions, to represent “happy covid,” “angry covid,” and “funny covid.”

His latest drawing, as mentioned earlier, represents this emotional complexity in that it is frowning and smiling simultaneously.

As monsters are often called such due to their lack of humanity, it was intriguing to see this development. This seems to represent the gradual normalization of covid in our everyday lives, how it has become a part of the average human experience. The initial blast of fear and uncertainty that we all felt at the start has faded into the hum of desensitization.

Hazem no longer voices a desire to defeat the monster like he used to before. Of course, this does not mean that he is content with the state of affairs – none of us are – but the point is that the outlook he and many of us have about the virus has fallen into passivity, a territory much more dangerous than it seems.

It is passivity that causes problems to continue festering until they blow up in our faces.

America has become the epitome of this, whether it’s the initial government inaction in regards to the coronavirus that enabled the situation to worsen, or the ongoing racial problems that have been around since before this country’s founding.

Perhaps it is easy to accustom ourselves to the presence of a danger we cannot actually see, but through the eyes of a child, this virus is not a mere microorganism but an entire, full-fledged monster.

The fact that we are so used to various types of monsters in our society roaming around and causing chaos right under our compliant noses, and that yet another is being added to that already long list makes one realize just how twisted it is. The only difference here is that this new monster doesn’t discriminate.

But since when was the presence of dangerous monsters okay or normal? Why is it, then, that we allow them to cause destruction as they please?

Most of all, how is it that children are recognizing monsters for what they are, while grown adults are turning a blind eye and ignoring their existence?

It appears that whatever is going on in children’s heads is a lot more relevant than we might have thought.

Salma Amrou is a Junior Reporter with Youth Journalism International and a devoted big sister.