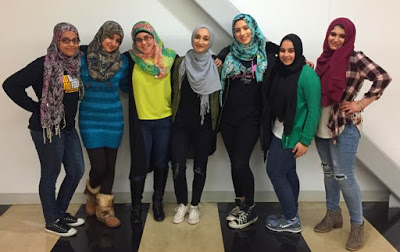 A small number of the Muslim students at Victor J. Andrew High School in Tinley Park, Illinois, include, from left, Esraa Gomaa, Jameela Yasmin, Ayaa Kanan, Diana Awawdeh, Danya Abuawad, Tesneem Abdelkhaliq and Jenna Ahmad.
TINLEY PARK, Illinois, U.S.A. – A hijab, or head scarf, is not meant protect men but to honor women. It is not just what you’re wearing but it’s also what you do and say. It’s who you are.
World Hijab Day is to represent and support Muslim women who wear the hijab. Anyone can wear the hijab for a day on February 1st  to support and represent these women. You don’t need to be
religious or a Muslim to do it.

New Yorker Nazma Khan founded National Hijab Day, which was first celebrated in New York in 2013.
Last year, people in 150 nations took part in World Hijab Day, according to the event website, worldhijabday.com. Organizers are expecting participation from people in 190 countries this year.
When I began to wear the hijab, I was 15 years old and it was my choice. Nobody ever told me to wear it or forced me to wear it. My parents made sure when I wore it, I was comfortable and happy in it.
I wear it every day and only around people who aren’t related to me. I can take it off at home and around my female friends and my family.
Some people think the hijab oppresses women.
Technically it’s not. It gives women freedom to try to be whatever they would like in a career or hobby.
Islam doesn’t have any rule that specifically tells women not to work in an environment because of her gender or her clothes.
Islam isn’t oppressing anyone and is welcoming and gentle.
Let me tell you something. Since July 21st, 2013 – the first day I wore it – I am still in love with my hijab and will always be.
My hijab gave me strength and confidence, and I always lacked confidence. As a Muslim American, I wore my hijab to express my beliefs and to show the world what the hijab really is. Wearing the hijab is my decision alone.
With a hijab, Muslim women can express our beauty and let people know that we are not oppressed but instead living with freedom and happiness.
With all the anti-Muslim sentiment coming from all over the country and especially the man sitting in the White House, you may think that I have second thoughts about my hijab and keeping my religion private.
I did not, surprisingly.  I never had any hesitation about wearing my hijab or being open about my faith. I’m always proud and never afraid to show it.
As a Muslim in today’s society, you can’t be weak. You have to stay strong and keep your head up. There may be people who are bigots, but then you will find people who have your back and stand up for you.
Knowing there are people out there in the United States who show their love towards us and don’t judge us makes me happy and stronger.
After President Trump signed the executive order creating the “Muslim Ban” that restricts people from seven mostly Muslim nations from entry into the U.S., thousands of people across the country protested it.
No matter what role you have in life, what race you are, whether you are Republican or Democrat, a celebrity, a billionaire or a regular student or working person, we all need to fight together against discrimination. It will make us stronger and keep our heads up high.
To my Muslim sisters: never hesitate to wear your hijab. It makes you stronger and beautiful.
As a Hijabi (a women who wears a headscarf called a hijab for religious beliefs), I chose to become a fashion and lifestyle blogger and YouTuber, so I can show the world what the hijab really
is and how beautiful it is. It’s my way to prove to the whole world that just adding a piece of cloth to your head does not make you different.
When they see on the internet what the hijab is, people become more familiar with it and view it no differently than other fashions or styles.  A hijab embraces the beauty of a woman and shows the world how she is just as beautiful as a woman who is not wearing one.
The color of our skin, hair or eyes, or our choice of clothes doesn’t change who we really are deep inside. We are all human beings.
What do you think? Will you stand in solidarity with me and my Muslim sisters by wearing the hijab for one day on February 1?
With all the modesty and respect you get as a Hijabi, you would feel like a queen and that your hijab is your crown.Diana Awawdeh is a Reporter for Youth Journalism International.
***
Your tax-deductible contribution makes Youth Journalism International stronger.
Thank you for your generous support!
HelpYJI.org