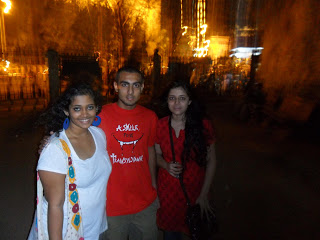 Lawyer Y.P. Singh, who has worked with the Central Bureau of Investigation for five years, explained to the crowd how the corrupt escape unscathed. Pointing toward a scam in Mumbai which snowballed into a national issue, he said, “Big players have escaped.”
However, Krishnaraj Rao, a journalist and a campaigner for the Right to Information Act, is taking the agenda of the umbrella group “with a fist of salt.”
Rao, who is also a publisher and designer, said there are already enough laws to rein in corruption. Implementation of those laws should be the concern, he said.
But he agreed that gatherings like these are really helpful.
“A country cannot run with corruption,” said an outraged Shalaka Thakur, a 19-year-old economics student.
She said she wants radical changes to happen but she is against violence.
“Violence will destroy the fragments of our democracy,” Thakur said.
Rao said he doubts the possibility of India witnessing turmoil like the Arab world.
“I see a change happening at the grass roots,” Rao said. “India is like a large ship turning by a few degrees, but the change in direction is big.”
Combating corruption “is not about going and lecturing,” said Anaka Kaundinya, a 20-year- old student at Government Law College. It is about “coming out in big numbers and more activism.”
Kaundinya said that from a very impressionable age, mannerisms are bred in the Indian society which make some susceptible to corruption. 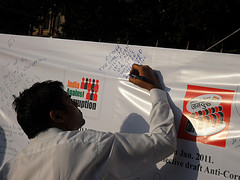 On the other hand, Thakur said, “Our approach has suddenly turned to materialistic. Aspiration is breeding corruption.”
The activists are specifically targeting the Lokpal (ombudsman) bill proposed by a government besieged by ugly scams, dubbing it toothless.
“At 19 and 20 my friends are excessively cynical,” Thakur said.
The measure’s anti-corruption mechanism, first proposed in 1968, is modeled on the institution of the ombudsman in Scandinavian countries.
However, the government’s proposed version doesn’t allow for the Lokpal to act on his own or to act on any complaint made by the public. Experts have pointed out several flaws in the proposed legislation which would allow corrupt politicians and bureaucrats to escape with impunity.
The umbrella group seeks to persuade the government to adopt an alternative bill drafted by prominent citizens and activists of the nation which closes all the loopholes.
The activists have declared March 31 as the deadline for the government to accept their “Citizen’s Bill.” Following that, they plan to organize more vigorous protests across the nation.
One answer to the rampant corruption in India, said Jaunty Sanmukhani, 19, is to “educate people at young age.”
“Don’t underestimate the youth,” said Thakur.