Created by Principal Christopher Clouet, the day includes singing and dancing groups with roots from all around the world. Students also will have a turn to get in on the action.

The talent line-up this year will include, at the top of the show, a Brazilian group that is based in New England, and a band of high school age, Irish brothers from Vermont. 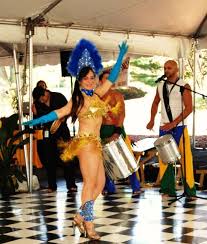 The Brazilian troupe, Ginga Brasiliera, transformed the gym last May when it participated in the first day celebrating different cultures.

Now they have returned to showcase their native style, and to once again teach a some students capoeira, a type of expression that resembles marshal arts.

The Irish brothers, who go formally by the name Pop Corn Behavior, play a modern form of Irish dance music.

“They should be interesting,” said Clouet.

After viewing the two main performances, students will divide into several sections, each going to see a different show.

Some of the acts include the Scottish Hylanders, two men and their bagpipes, a South American group called Ginga Brasileira, who play a kind of Brazilian swing music, and a percussionist who will teach a workshop.

A quartet of a capella singers named Four of a Kind will also be part of the day’s festivities, entertaining in the cafeteria.

The exact bill for the day is not complete. Clouet is still trying to pack the day with as many interesting acts as possible, including some surprise performances.

He said he is “in negotiations” with a singer originally from Puerto Rico named Lydia Lebron. “She’s a marangea / salsa singer,” Clouet explained. “She’s really out there.”

Participation will be a goal of the second International Festival.

Last year Central had a problem with many upperclassmen getting dismissed by parents so they could skip the performances.

To avoid that, this year’s program will divide the school day in half, leaving shortened periods in the morning and afternoon, making it more difficult for students to leave.

Clouet hopes parents will see the International Festival as an educational experience, and keep their kids in school. He also thinks the first multi-cultural day may promote itself.

He said, “I hope last year was enough of a success that kids will say they like it.”