BRISTOL, Connecticut, U.S.A. — If you’ve ever found yourself playing Scrabble and thinking, “Gee, if only this game were more complicated and required more math skills!” then BuyWord is the board game for you. 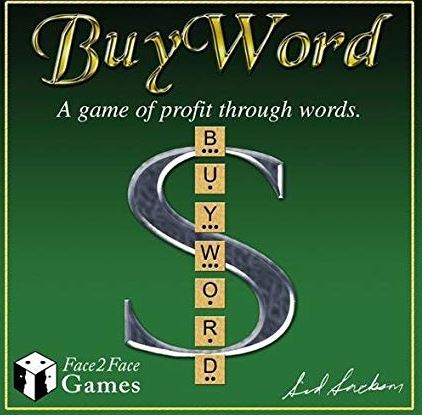 Of course, if you’ve found yourself in the above scenario, you probably have more serious problems than an armful of Monopoly-type money can help you with.
However, even relatively normal human beings can have fun playing this game. I should know – I enjoyed it, and as any of my friends will tell you, I am relatively normal. Well, most of my friends, anyway.
The object of the game is simple: make money – of the multi-colored, utterly useless, fake variety. A given amount of this colorful cash is doled out to each player at the start of the game.
The means to the end are somewhat more complex.
First of all, there are the Scrabble-esque wooden tiles. At the start of the game, these are placed face down so that the letters printed on each aren’t visible to the players. Unlike Scrabble, though, each wooden tile also has a number of dots printed on it.
Then there’s a single large die, which also has dots on it, but just in the usual way. A player rolls the die, and whatever number it shows is the number of tiles each player takes on that turn.
Here’s where it starts to get a little confusing:
Once you have your letters, plus the wild tile that each player automatically received at the beginning of the game, you must decide whether or not to buy your letters. You can’t buy them individually, folks – it’s all or nothing, so choose wisely.
The cost for any set of letters is equal to the sum of the dots on all the letters times itself – that is, the dot-sum squared. Got that?
Okay, assuming that you’ve bought your letters, and assuming you have a basic grasp of the English language, you can now use those letters to make a word. Then you can sell this word back to the banker to get back some of the green… and yellow, and pink, and blue… you originally spent.
The pay you receive for your word is equal to the square of the sum of the dots on the tiles of the letters that make up that word. Chances are, it will be less than you paid for the letters originally, so the only guy making money will be the banker. Chances are, this will strike you as a rip-off and you’ll wonder whose idea it was to play this game in the first place. (Chances are, it was the banker’s.)
If you’re an overly-competitive Scrabble player like I am, you’ll most likely want to use up all the letters you can. That’s often a good strategy in Scrabble, after all. And it seems like a good plan here, since selling fewer letters than you bought would cause you to lose more money.
But there’s a catch.
Whatever leftover letters you have after selling back your word on the first round, you don’t have to pay for later. That means that, as the game progresses, you can store up these extra letters from each turn to make bigger words – and, hopefully, a profit.
You don’t have to buy every round of letters you pick, and you don’t always have to sell a word, either. But you do have to weigh your options and take a few risks – you have to spend money to make money, after all.
This game isn’t for the faint-of-heart or the wishy-washy. It demands strategy, quick decision-making, a good vocabulary, and spelling skills. Math skills aren’t necessarily required – in fact, they’re included in the box: There’s a list of times-tables to help those of us lacking in the math department with the calculations. The squaring, at least – I’m pretty sure you’re on your own with the addition.
Of course, if you meet the game’s age requirement but you can’t add up the dots, then you probably have more serious problems than an armful of Monopoly-type play-money can help you with.
Fierce competitors and people who like to flaunt both their incredible math and verbal skills at the same time will love BuyWord – most likely because they’ll win at it.
The rest of you will probably like it, too, once you get the hang of it. And if your math and verbal skills are in need of improvement, you may even get some benefit out of playing it. Either that or just a record of humiliating defeats… but like I said, with this game you have to be willing to take a risk or two.
All in all, BuyWord is a pretty good game. The directions sound quite complicated at first, but they’re not hard to get the hang of once you’re involved in the game. It doesn’t have a 10-page list of instructions for you to get bored with and ignore, different kinds of cards for you to confuse, or obnoxious buzzers for you to want to smash.
Nope – it’s just you, your letters, your money, and your brain. Hopefully, that will be enough for you to dominate and amass a fortune in play-money.
And if it’s not… well, at least there’s that helpful times-tables card.