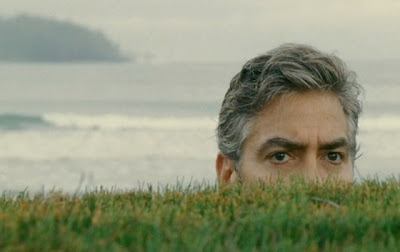 Note: Spoilers within.
TORONTO, Canada – It  is in the strange moments of life when one is put into completely new, befuddling, complicated situations that people experience a sudden spurt of growth and realization about themselves, their life, and the way in which they fit with everyone around them.
The Descendants, directed by Alexander Payne, is a film that depicts this process in its entirety, as one comes to see how the most tragic of circumstances for a man can also double as the most miraculous of transformations in a cocktail of horror, humor and sorrow.
In a way, this film represents how life, in and of itself, is a double-edged sword, because it exists in shades of grey confusion instead of in black-and-white clarity. 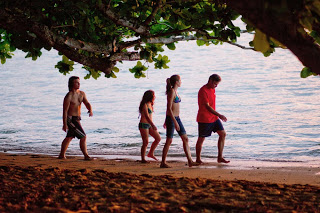 Nowhere is this message of murkiness more prominent than within the complexity of the marriage of Matt King (the titular character, played by George Clooney) to his wife.

We learn of their relationship dynamic early on in the film, when King says, “I’m the understudy – the back-up parent, and now, with Elizabeth in the hospital, my daughters are testing me.”
King is the parent who takes redemption in his work, while his wife, in his ominous neglect, also seeks salvation, but in extreme sports, excessive parenting, and recklessness.
King and his wife have the typical destructive marriage – one in which the husband and wife grow apart over time, sweeping more and more problems under the rug, and letting lost desires and reconciliations simmer in a froth of icy turbulence.
In Matt and Elizabeth’s case, their marriage ends with a sad realization. One of Elizabeth’s extreme sports ventures leave her comatose and Matt in a state of flux as he directly deals with his foul-mouthed, sent-straight-from-hell daughters along with a deal that could compromise the land of Hawaii.
Matt is underwater, literally, for the first time in his life, as he has to face up to the challenges of everyday reality and deal with the underlying menaces that everything in his life now comes to harbor.
His land deal represents a heritage lost and gone. His daughters bring new problems to the table, every single day. And his wife’s condition comes with its own hidden angst, as Matt comes to find out about her own hidden turmoil and indiscretions.
Each situation is new for Matt. Each situation requires he step up and make a pivotal decision. And each situation is difficult. There is no black and white way with which Matt can deal with his daughters, his cousins and his wife.
It is within that greyness that you find the heart of The Descendants.
There is a scene when Matt is at a hotel with Scottie (Amara Miller) and Alex (Shailene Woodley), his two daughters, along with Alex’s pot-smoking tagalong friend, Sid. 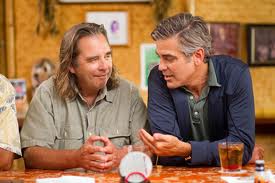 Scottie, who is 10, had wanted to watch a porno movie earlier in the night, and she mentioned that her best friend who watched them all the time called them “masturbation movies.”
With this disturbing piece of news, Alex lashes out at Scottie, and tells Scottie that her best friend is a “twat.” The two argue back and forth, getting more vulgar and crude with each passing phrase.
The strange hilarity and profanity of the situation prompts Matt to lash out against both of them.  He is angry, because he’s realized just how profoundly rebellious his daughters have become, seemingly holding all authority in contempt. He can’t control their outbursts (Scottie calls her own sister “a motherless whore” at one point while Alex has a strange liking for the word “twat”), even though he knows he has to because it’s his job as the good, decent parent.
So Matt, completely helpless with his daughters, wakes up in the middle of night to find Sid (Nick Krause), Alex’s friend in the hotel TV room, still awake in stoned reverie.
In full-out parent distress, Matt says to him: “Sid, what you would do if you were me, and you had to deal with my daughters?”
Sid replies, funnily enough, “I don’t know, trade them in for sons, I guess.”
To which Matt answers, “Yeah, but no offense, if I had sons, they’d be probably be just like you, miles away from Smartville.”
This prompts Sid to become super insulted: “Hey, old man, I am totally smart. I’m the president of my school chess team, I get decent enough grades, and no matter what, I always, always have a ton of weed.”
And in this way, the conversation between Matt and Sid lingers, and other layers start to come out between them. Sid reveals a terrible family tragedy that happened to him a few months ago, and a family history of addiction. More important, he reveals a stoic and tenacious sense of self, which prompts Matt to believe in better things for his own daughters.
The strange thing about that heart-to-heart is the unexpectedness with which it occurs.
Matt, in a moment of frustration, vents to the only bystander he can, Sid, even though he hates Sid and holds him in contempt for being so … laid back.
But in that instance when Matt gets over his judgment and reaches out to Sid, he finds a person to whom he can relate, a person who’s suffered as much as he has, maybe even more.
These surprising revelations characterize The Descendants easily, because Matt is in strange situations all the time. He is dealing with the dumbly materialistic (his cousins trying to pilfer him for
easy money), with the tragic (his wife’s coma), and with the tragicomic (his daughters’ plight).
And within all that, Matt is finding himself, surely, one way or another.
The Descendants is truly about one man’s odyssey through life – and through it all, we are rooting for this hero, this everyman figure who is starting to finally live and understand the life around
him.
With his graying hair, his girlish gait, and his stoic way of facing life, we have a moving character for the times – a man who is just trying to get by, day by day.
I cried during this film. It was near the end, when the hidden turbulence of all the scenes came to a climax with the closing sequence when Matt realizes that he did, truly, love his wife, despite their growing isolation, despite her indiscretions, and most importantly despite all the pain.
Matt says to Elizabeth, in staccato whisper-tears at the hospital: “Good-bye Elizabeth, my love … my pain … my friend … my joy. Good-bye!”
With that realization, Matt takes charge and moves beyond the heartache and dissonance.
He will continue have trouble with his daughters, his cousins will continue hate him, and his job will still be demanding, but the renewed confidence with which Matt grows out of his late adulthood lethargy is enough of a cause for cheer and triumph.
He has come to find himself, he has come to understand how to be a father, and he’s come to understand how he wants to live.
You can never really be too old for a coming-of-age story.
Vipasha Shaikh is a Reporter for Youth Journalism International.