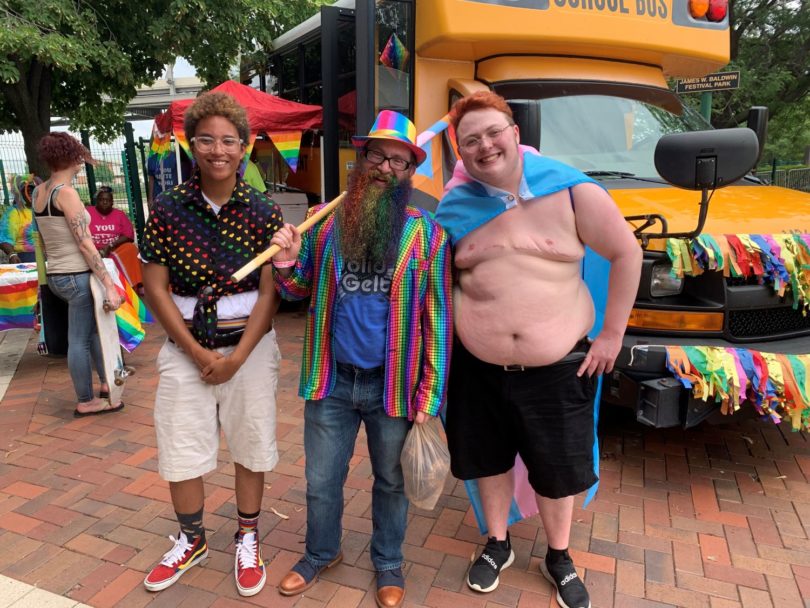 Full of pride and joyful smiles at this year's Peoria Pride Festival in Illinois are Gabby Crabtree, left, and Jaxon Billingsley at right with another festival goer. (Norah Springborn/YJI)

Peoria, Illinois, U.S.A. – As a young child, you are often taught to mind your own business and stay in your own bubble. As you grow up, your eyes are opened to the realities of this world as you start to acknowledge what all is out there.

You feel sheltered until you’re old enough to realize your place in the world. Sometimes you put yourself in uncomfortable situations just to expose yourself to the unknown.

After much consideration and convincing, my friends persuaded me to attend our local Pride Festival with them last month. I owned no rainbow-colored shirt nor any button that stated my sexuality. I felt sheltered.

It seems my prejudice about Pride activities had gotten the best of me.

Upon arriving at the festival, my eyes were suddenly met with the never-ending flow of rainbows: rainbow shirts, rainbow tattoos, rainbow beards, and even rainbow squid hats. Although the rainbow flow never ended, I quickly learned to spot the norm in every direction.

Rainbow is what connects people to each other; seven colors define who one is and one aspires to be. People at the Pride Festival had pride for their own, distinct kind of rainbow.

Seeing different people in their different elements made the festival unique. The power of choice was in every direction – numerous pride flags, buttons, t-shirts, and signs all which brought the importance of this festival to light. Watching people compete in the drag queen competition as the crowd went wild proves how critical a Pride festival is for people to understand who they truly are.

After all, a button containing a simple “They/Them” has the power to change someone’s life.

Walking along the street lined with tents, shops, and food at the Pride Festival, I knew I was safe. I knew it was okay to be around people who were not exactly like me. All the people there were present for a good reason.

Each was attending that festival with their own purpose and ideas, but each was united under the single goal – to celebrate Pride while having true pride in who they are.

Listening to my friends talk to people at the festival, I was blown away by their stories. While each lives a different life, their narratives had the power to inspire each other. Each person genuinely – not fakely – cared about each other and told their story with pure joy of who they are.

I had never encountered something like this. I was thankful to my friends for pushing me to attend this Pride Festival.

As I observed people start to cry as they encountered others like themselves and those who wished they could be, I stood in denial of how something so loving stood in the doorway of hatred outside of that little community festival. Is it truly hatred or is it prejudice?

Yet, hearts colored in a rainbow pattern are so often hated in a society that desires love.

Even if you don’t consider yourself a part of a certain community, it’s inspiring to see the compassion people have for others.

We all are humankind, after all.

Preconception falls in the light of exposure. It’s important to expose yourself to unknown experiences. You will always learn something if you are willing to do new things.

It’s a gift to see other people happy, loved, and accepted. That’s something we can all learn from a Pride Festival.

Norah Springborn is a Correspondent with Youth Journalism International.