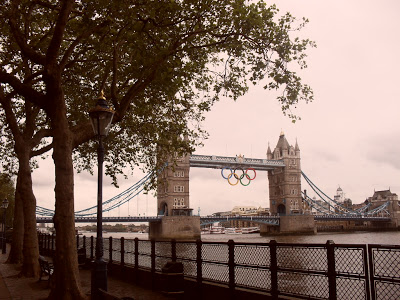 DEVON, England – It may be all this rain
we’ve been getting, but there most definitely is a different atmosphere in
London leading up to the July 27 Olympic kick-off.
Firstly, the new buildings. The Olympic committee has been busy over the
past year completing an Aquatic Centre, Olympic Stadium and a statue called
‘Orbit’ for the Games.
An Olympic village has
also been built to house officials and athletes who will be managing or
competing this and next month. This week, they are beginning to move in.
Travel in London has
also changed. An ‘Active Travel’ campaign has been launched to encourage
Londoners to do more physical exercise this summer, particularly if they are
traveling to and from the Games, rather than using public transport.
According to the London
2012 website, £10m, or about $15.6 million in U.S. dollars – has been spent
improving 75km worth of walking and cycling routes in the city and in the
suburbs.
Furthermore, there are
many locations all over London to hire bicycles from as part of the Mayor of
London’s Barclays Cycle Hire scheme, in an attempt to reduce London’s carbon
footprint, get Londoners to do something active and free up public transport
networks, including underground tubes.
Moreover, messages
recorded by London Mayor Boris Johnson are being played at major London
stations, telling people to “get ahead of the Games.”
The website www.getaheadofthegames.com advises leaving
extra time for journeys during the Olympic period as they can take longer when
stations are busy, to plan your journey to prevent queues at ticket stations,
to not use cars – parking is extremely limited – and to expect security checks
at Olympic venues.
There is most definitely
lots of evidence suggesting the arrival of the Olympics in town. One example,
the giant Olympic rings hung on Tower Bridge, can be viewed from many locations
around London.
Richmond Park contains
the largest rings in London. Measuring approximately 300 meters, according to
the London 2012 website, they can only be fully viewed from above.
All we have to hope for
now is that the weather will cheer up. Now, let’s crack on and win some gold
medals!