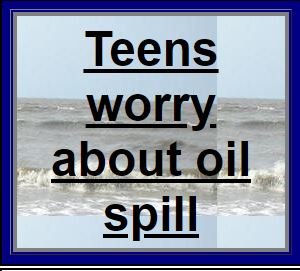 HOLLY BEACH, Louisiana, U.S.A. – The catastrophic oil spill in the Gulf of Mexico is causing some buzz across the world, and here on the coast, some teens are worried about the dangers offshore drilling poses, both to workers and to the environment. 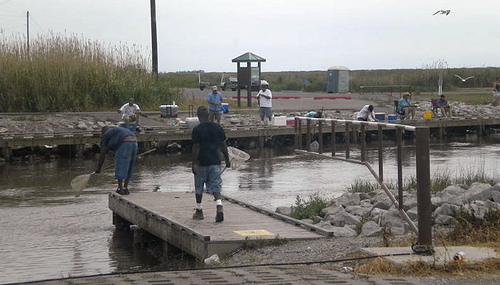 Popular activities like crabbing and fishing may suffer if the water is contaminated by oil. (Kaley Willis/YJI)

“I think that offshore rigs make a lot of money, but it’s way too risky,” said Majah David, a 12-year-old seventh grader from LeBlanc Middle School in Sulphur, La. “People get killed over that. It’s just not worth it.”

“I know I have some older cousins who worked near the oil rigs and I haven’t heard from them ever since,” said Davillier. “We’re trying to find out if they were the ones killed” in an explosion on a deep sea drilling operation two weeks ago.

Davillier lived most of her life in New Orleans, until her family had to leave when she was 12 because of Hurricane Katrina. She moved to Georgia with her mother, grandmother, and siblings, but she still has a lot of family in New Orleans who are affected by the ongoing oil spill in a devastating way. 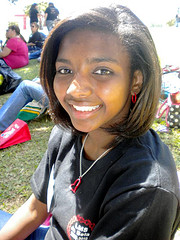 Liz Landry, 14, is an eighth grader at LeBlanc Middle School in Sulphur, a town where the water isn’t too far from being contaminated by the oil spill.
“I don’t think that they should build oil rigs in the ocean because of this problem,” said Landry. “It endangers the wildlife and they should only drill for oil on land if it’s that important.”

But not everyone is against offshore drilling.

Lynn Fuselier, who lives and works in Lake Charles, named some reasons she supports it.

“With gas prices being so high these past few years, the United States needs to get as much oil as we can so gas prices can go down,” said Fuselier.

Drilling locally is a good thing, Fuselier said, because the nation won’t have to rely on imported oil that comes from more unstable regions.

“It’s a horrible thing that happened and it will definitely affect our environment, but you have to realize that the oil rigs give us invaluable resources,” Fuselier said.

Brittney Williamson, 14, is an eighth grader at Vinton Middle School in Vinton, La., who’s worried about the safety of the wildlife and the air that will be affected by the oil spill near her home. But she said she’s also concerned about the impact on the rest of the Earth as well.

“I feel so bad for all of the animals that will die on the shore,” said Williamson. “They should definitely stop drilling in the Gulf. It seems really unnecessary and it’s just releasing more carbon into the air, contributing to global warming.”

Davillier said she never really was a fan of offshore drilling.

“The environmental risks that the drillers are taking are huge,” said Davillier. “I am a big eco-freak and I only want what’s best for the Earth. With the incident in Alaska a time ago, I didn’t want anything like that to happen again.”

The “incident in Alaska” that Davillier refers to is the 1989 crash of the oil tanker Exxon Valdez into a reef in Prince William Sound, Alaska. Spilling more than 11 million gallons of crude oil, it was the largest in U.S. history.

Jellyfish are among the marine life threatened by the oil spill in the Gulf of Mexico. (Kaley Willis/YJI)

After the horrible catastrophe of the Exxon Valdez, some believed that greater care would be taken and this kind of environmental disaster wouldn’t be repeated, but it did.

Davillier said oil companies have to act to prevent these types of spills.

“I think that they should take more precautions to keep accidents like these from occurring again,” Davillier said. “I know for sure, until oil runs completely out, that the other countries will not stop their need for oil. I also agree that our country will still continue to drill for oil and not take into account the safety of the oil workers, other people in cities that are affected by the oil spills and the environment.”

Kaley Willis is a Junior Reporter for Youth Journalism International.