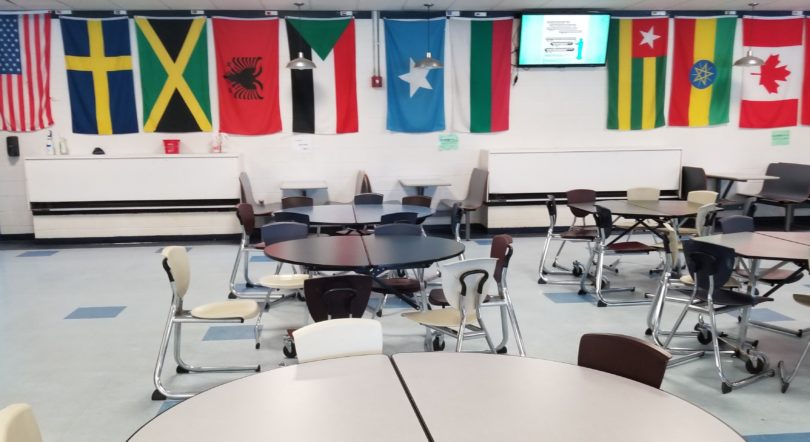 BRISTOL, Connecticut, U.S.A. — Buying a school lunch in Bristol just isn’t the same as it used to be.
Students at the city’s high schools now use specialized plastic “snap cards” at cafeteria cash registers. The bar-coded card showing the holder’s student ID number, according to policy, must be used in order to complete a purchase.
Students may set up a computerized account and use the card as a voucher, but even if a student pays in cash, the card is required. If a student does not have a card, his ID number is manually entered into the cash register.
This is the first year Bristol Eastern High School has utilized this system, and the second for Bristol Central High and Chippens Hill Middle School.
“I want people to realize it was meant as a benefit for the [school] system and [the program’s] participants,” said Assistant Superintendent of Schools William Smyth, who championed the concept before the school board.
Others, however, are yet to be convinced.
“I really don’t know what its purpose is outside of inventory,” said Eastern Principal V. Everett Lyons.
Students are not only confused about the policy, but point out flaws as well.
“It’s an extra thing to hold in your hand and hold up the line,” said Eastern junior Dave Giblin. “There can be fraud. You just have to know someone’s [ID] number.”
Rip-offs are a common fear at Eastern.
“Anyone can tell the lunch lady anyone’s number and take all of their money,” said junior Brian Cummiskey.
Greg Boulanger, director of food services at city schools, admitted that there are a few flaws to be worked out “as we grow into the technology phase.”
“The system works as good as students cooperate,” said Boulanger.
Eastern junior Kym Read attended Central until this fall. She was quick to say that Eastern’s cafeteria is “more lenient.”
If a Central student does not have a card, Read said, “even if you remember your ID, they still give you a hard time.”
Read explained that the first time she bought lunch at Eastern, she was surprised at the cashier’s mild reaction to the fact that she didn’t have her card. Ever since, Read said, “she never cards me.”
Lending cards is discouraged as well at Central.
“If someone gives you their card and you get caught,” explained Central junior Chris Blum, “they take your card, you can’t buy the lunch, and you won’t be able to use your card for a few days.”
Boulanger, whose office is at Central, said voluntary lending is acceptable in theory, but mentioned that his staff was trying to track down a card thief at the time.
At Chippens Hill, Boulanger said, students without cards are sent to the end of the lunch line.
Boulanger and Smyth readily point out the positive aspects of the program.
With a card, Boulanger said, a purchase takes only four seconds at the cash register, as opposed to eight to 16 seconds when the student’s ID is entered manually.
“I think the system increases accountability,” said Boulanger, telling how the city’s school lunch program was recently audited by the state, receiving a “very favorable” review.
He also mentioned inventory control and a state reimbursement that the school system receives for each free or reduced lunch sold.
Smyth explained that the card policy helps with this because it creates a required state of anonymity for low-income students receiving free and reduced lunches.
Smyth said he decided to endorse the policy based on professional reading, accounts from colleagues, and on-site visits to schools using the system. The policy, he said, has met with success in other school systems.
Central’s governance council has proposed that the snap card be used to check out books at the school library and as collateral with lavatory monitors to crack down on in-school smoking among students.
Students, for the time being, are trying to live with the policy as best they can.
“I just use the vending machine,” shrugged Eastern sophomore Steve Zurell. “It doesn’t take the card.”

Brian LaRue is a Reporter for Youth Journalism International.