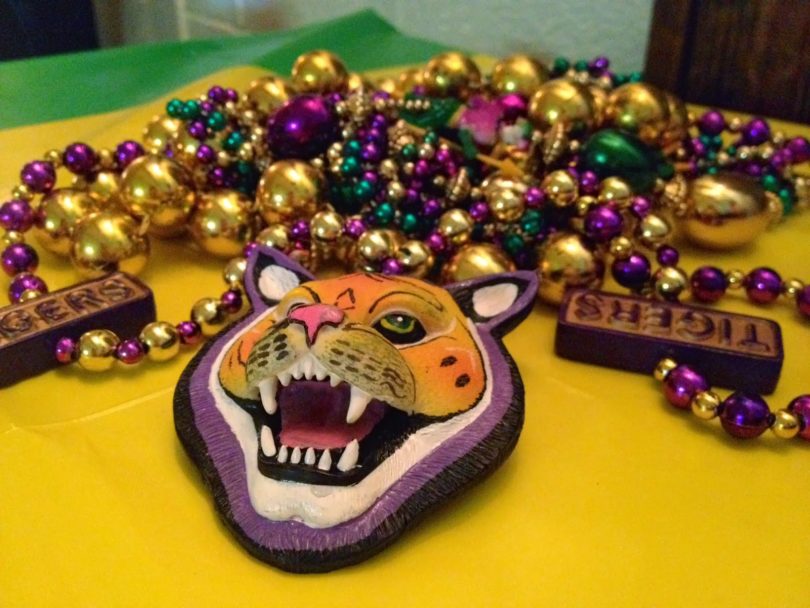 By
Kaley Willis
Senior
Reporter
Youth Journalism International
LAKE
CHARLES, Louisiana, U.S.A. – Living in Southwest Louisiana during Mardi Gras
can only be described in one way – one fun celebration.

Students
get a week-long break from school and there is always a parade, party, or gumbo
cook-off happening around the corner.

After
coming to the realization that I, being a Louisiana native, have never fully
experienced Mardi Gras, I decided to dedicate a whole day to nothing but Mardi
Gras festivities, and the results were better than I could have ever
anticipated.

On Sunday,
I woke up, ate a slice of cream cheese King Cake, and got ready for my Cajun
adventures.
My day
began at the Krewe De Couion party, a krewe founded in 2001 by John and Joyce
McRae and dedicated to having a good time, celebrating Cajun customs, and
treating each other like family.
A krewe
is a group of people of all ages who celebrate Mardi Gras under a certain name.
Anyone can start a krewe. Names are often in French and hint at a theme, such
as simplicity, the cosmos or, in this case, the Krewe de Couion, or krewe of
crazy.

I
talked to Kristen Fuselier, a 21-year-old who has been a member of the krewe
since she was a child.
“Being
a member of Krewe de Couion is more like being in a big family. We’re all so
close, I am able to go to them for anything,” she said. “It’s times like these
when we’re all together when we can have a really great time.”
This
particular Krewe de Couion get-together, held in Carlyss, La., was celebrating
the reigning King and Queen who donned bejeweled crowns and beautiful capes.
The
krewe didn’t always have these luxuries for their royalty, however.
The
2013 Krewe de Couion Queen Becky Fuselier said, “Our king and queen wore paper
crowns from Burger King and paper capes for a long time. We’ve always been a
very simple krewe.”
While
this krewe may enjoy the simple things in life, their celebration featured all
of the wonderful characteristics of Louisiana life; Zydeco music, which is a
special genre originating from Southwest Louisiana, dancing, and all the Cajun
food you can eat, like jambalaya, gumbo, boudin and crawfish.
The
krewe, an interesting mix of people of all ages from different backgrounds,
came together to celebrate the King, Queen, and Revelry, who are like the royal
court jesters. They dress up like jesters and dance around behind the King and
Queen.
At this
party, the krewe’s royalty took a walk around the room to the sounds of
musicians playing Zydeco music on harmonica, saxophone, and accordion.
After
eating a hearty meal of jambalaya – a dish of rice, meat and vegetables, and my
favorite Cajun cuisine – I headed off for my next adventure of the day, the
Lake Charles Children’s Parade.
An alligator float in the Lake Charles Children’s Parade
Young eager faces lined up along the Lake Charles streets as the Mardi Gras Children’s Parade began.
This
year, Lake Charles hosted one of its biggest parades in years as more than 130
floats caught the eyes of thousands of parade-goers.
Many
local krewes, businesses, and clubs made floats for the parade, showcasing the
official colors of Mardi Gras: purple, green, and gold.
Candy,
stuffed animals, and strings of colorful beads were thrown off of the floats
into the crowd, as everyone tried their best to catch as many beads as
possible.
Children
of all ages had beads stacked up to their chins, as music and cheering filled
the air while the crowd enjoyed watching those lucky enough to ride atop the
floats.
While
traditional parades like these are common around Louisiana, Lake Charles has a
unique twist to the typical parade at night when the Lighted Boat Parade made
its way along the Lake Charles Seawall.
Local
mariners decorated their yachts and tugboats with beautiful lights and Mardi
Gras decorations.
People
in the crowd, bundled up in the chilly weather along the dock, tried hard to catch
beads and cups, much like the land parade earlier.
A
gorgeous and festive end to the night, the Lighted Boat Parade perfectly
represented Southwest Louisiana and the Mardi Gras season.