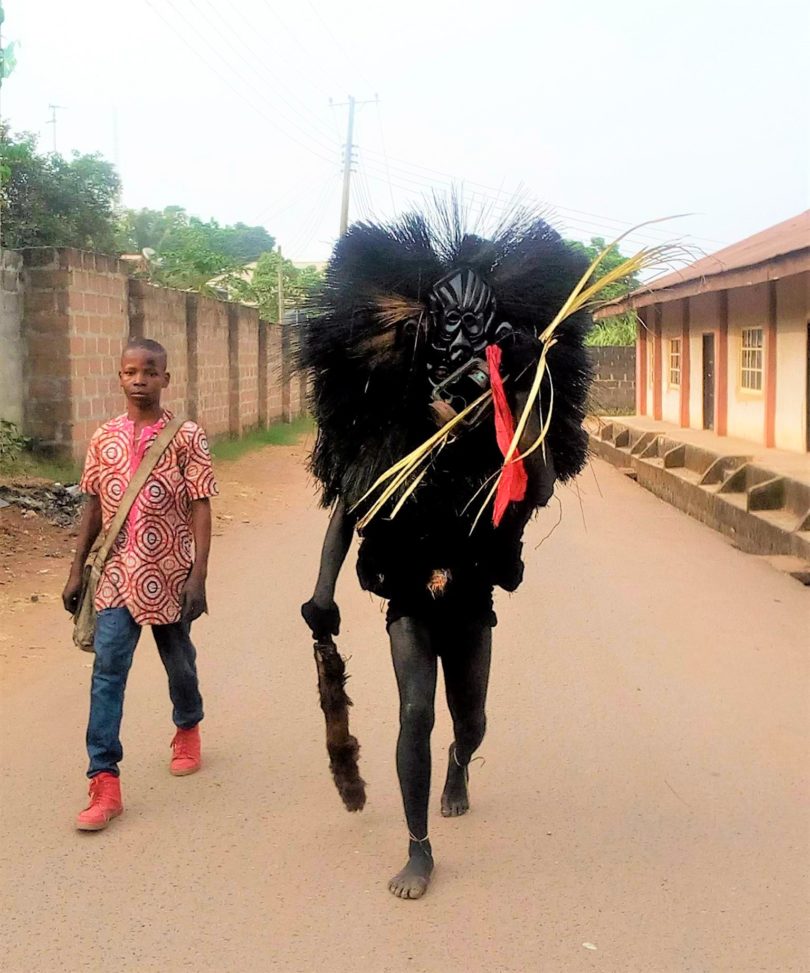 A masquerader walks in the street of Umuahia, Nigeria. "We are celebrating Christmas," his helper said as they passed. (Nchetachi Chukwuajah/YJI)

Umuahia, Abia State, NIGERIA – In a Christmastime ritual described as both a cultural tradition and a dangerous traffic menace, young men here have taken to the streets in scary costumes, hoping to collect cash from motorists.
In the southeastern Nigerian state of Abia, youth from the Igbo tribe have been celebrating their culture’s masquerade tradition during the holiday season. Their practice began in early December and will reach its climax on Christmas Day.
They dress like monsters in costumes made of sacks, ropes and raffia – known as “ekpo” or “mmonwu” in Igbo parlance – and beg and extort money from motorists and other road users.

Different masquerade groups go about in fierce-looking attires and masks, wielding real machetes or whips menacingly, to scare their victims into submission. The initiators are people referred to as “home boys” – those who live in their communities of origin.
Along with the person in costume, there are other men who are not in costume, but are responsible for keeping and safeguarding the money collected. At the end of the outing, they share the booty.
Their continued presence causes long hours of traffic gridlock on major roads in Umuahia, the Abia State capital. They do not mind standing right in the middle of the road, dancing and gesturing at people to give them money.

In traditional Igbo society, the masquerade or mmonwu is regarded as a spirit, the mediator between mortals; a sacred deity. It is not seen except during an important festival or at the death of a prominent member of the society. That is why they are believed to only hear and speak guttural and surreal languages only understandable to someone with supernatural abilities.

Now, nobody seems afraid of the consequences of coming close to a masquerader. Some people who aren’t part of the masquerade cult even talk about putting on a costume.
Though they pose a great traffic risk, some motorists like JohnNelson Nwamkpa, are of the opinion that these young masqueraders are re-enacting the African culture and giving the younger generation a feel of what the masquerade is.
“That is how they choose to celebrate,” Nwamkpa said. “Maybe it is their culture, but to stand on the road should be discouraged, as they could endanger themselves.”

On the other hand, those who don’t like the masquerade call it madness and suggest these young men put themselves into other meaningful and dignifying ventures.
“Some who use it within business areas in Umuahia use it to deny people their rights,” said Joseph Idika, a civil servant who lives in the town. “They harass people with cutlass and use the opportunity to steal people’s goods and hurt them on the road.”
But for these young men, being a masquerader is just a way of making brisk money while having fun. According to them, during the yuletide season, people are more at ease with giving and graciously dole out some money.
Nchetachi Chukwuajah is a Reporter with Youth Journalism International. 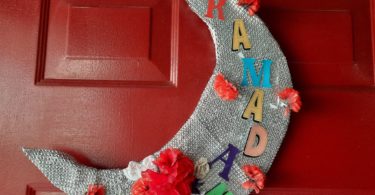 Suffolk, Virginia, U.S.A. – It has been about a year since some states initiated pandemic lockdowns... 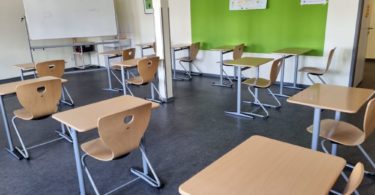