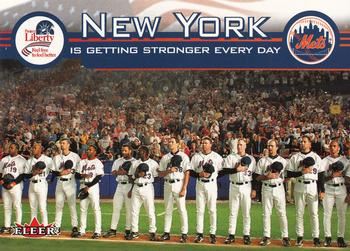 AVON, Connecticut, U.S.A. — The off-season is a time for players to relax, improve their skills and get stronger.
For teams, though, it is a time to pick up new players – something that kept the New York Mets’ front office busy this off-season.
The Mets signed a plethora of players.
Topping the list is fielding sensation Roberto Alomar, who came from Cleveland, where he was part of the best shortstop-second base duo in baseball.
Alomar takes Edgardo Alfonzo’s position at second base this year. Alfonzo is now the Mets’ starting third baseman.
A familiar name for New Englanders is Mo Vaughn, tapped to replace Todd Zeile at first base. Vaughn, the former Boston Red Sox slugger, came to the Mets after sitting out the 2001 season due to a torn bicep tendon.
In the Mets’ third game of the year “Big Mo” hit his 300th career homerun.
Vaughn will certainly hit with power, but a question remains: will he be able to hold his own defensively on the field?
Another player brought in to boost New York’s offense is former Milwaukee Brewer Jeromy Burnitz.
Burnitz started his career with the Mets in 1993. He has hit at least 28 homeruns for each of the past five seasons and has close to a .500 career slugging percentage.
With his power, he will protect Vaughn and Mike Piazza in the middle of the Mets’ lineup.
New York also brought back Roger Cedeno to the squad. He played for the Mets in 1999.
Cedeno has lightning speed and has stolen 146 bases over the past three years. That’s 48 more bases than the all-time stolen base leader Ricky Henderson has stolen in the past four years.
Everybody knows that pitching wins championships – including the Mets, who went out and signed three quality pitchers who will be in the starting rotation.
Lefty Shawn Estes will compliment Al Leiter, the Mets’ ace.
Former Colorado Rockies pitcher Pedro Astacio and the young star Jeff D’Amico were the other pickups.
In the past few years, New York has lost many good hurlers, including Mike Hampton, Rick Reed and Bobby Jones who left voids in the Mets’ starting rotation.
The team finally has worthy replacements for them.
The roster is not totally dominated by newcomers, however.
The star of the team, Mike Piazza, is back and ready to put up great offensive numbers.
After a disappointing season last year, Alfonzo looks to recover offensively and get used to his new position at third base.
When Alomar left Cleveland, he left Omar Vizquel, his dear friend and probably the best shortstop in the game.
In New York, he will play with veteran Met Rey Ordonez, an excellent fielder. Mets’ fans will see a lot of fancy double plays turned between the two throughout the year.
So will the “New-Look” Mets live up to the expectations of fans and journalists?
They should be able to shine with one of the best defensive infields in baseball (Alfonzo, Alomar, Vaughn, and Ordonez), a lot of power in the lineup and quality pitching.
Perhaps there will be another “Subway Series” in October.
And if there is, this time the Mets will have the players to match up with the mighty Bronx Bombers.