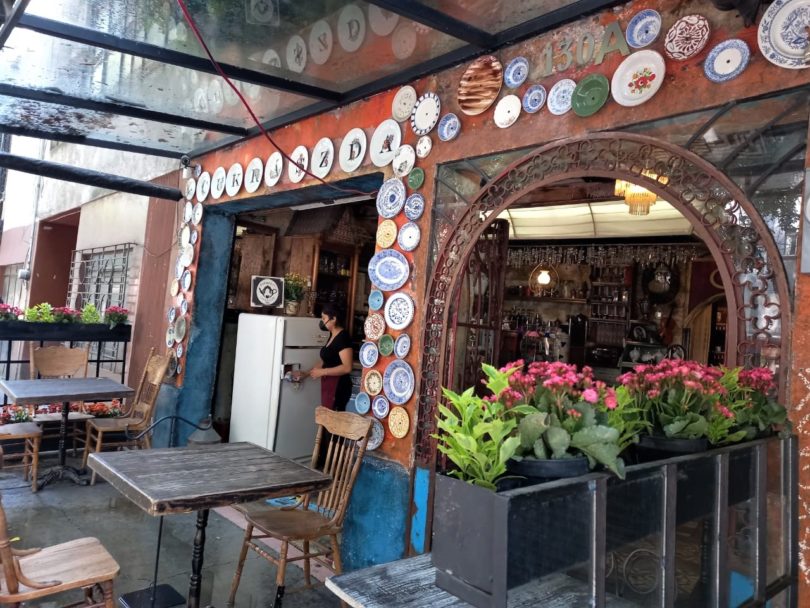 The terrace of a little street restaurant in Mexico City. (Regina López/YJI)

MEXICO CITY – There is no easy way to describe ‘home’ or to describe Mexico City, where I live.

I think home is a place that you love and you feel like you belong, but in this case I just feel love for the city.

The city is like any big city – its diversity is in its people and its special places. Just walking down the street you would find any kind of people from any place in the world. There are countless museums.

There’s always a story behind every street and building, and not just of Mexican culture, but from any culture. Mexico City is filled with restaurants of any kind and it is really easy to find food from every part of the world.

I believe that a big part of my education came from the city. Every month my school required us to go to one of its cultural spots. I’ve been to places from the Lecumberri Palace, which used to be a jail for political prisoners, to the Revolutionary Monument where four past presidents rest.

The buildings are not the only ones with a story behind them. There are people here from everywhere. In my gym I had a friend who is from Poland and actually, I go to a Japanese high school.

There are approximately 8.8 million people living in Mexico City. Every day is pretty hectic, everything and everyone is constantly moving and like any city everything is really fast.

It can be overwhelming to be in the middle of all that chaos, but for me, it is extremely fascinating. There’s no time to get bored when everything is happening and you are trying to pay attention to every single detail.

Because the way I see it, a story is unfolding and it is in these kinds of places where the most interesting stories take place.

It’s sad to say that Mexico City is not a very safe place, especially for women. Although we have made great progress, we haven’t achieved equality as I would love and as it must be.

Like many cultures in the world, there have been some misogynistic things that have stayed part of Mexican culture.

But I also think that Mexico City is one of the most progressive parts of Mexico, and – I dare to say – of the world.

Mexico City is the only place in Mexico where abortion is legal and so is same-sex marriage.

I love every single part of my city.

Even if you are not at one of the museums or attractions, there are a million ways to entertain yourself, from the thousands of parks to the farmers’ markets that are in every corner of the city.

Even just walking down the street and looking at all the strange buildings with their different colors is interesting.

This city has taught me a lot. It is one of those places that is so cultural that it is kind of a window to the rest of the world. Now I want to see with my own eyes all the multi-culturalism that Mexico City has shown me.

Regina Lopez is a Reporter with Youth Journalism International.