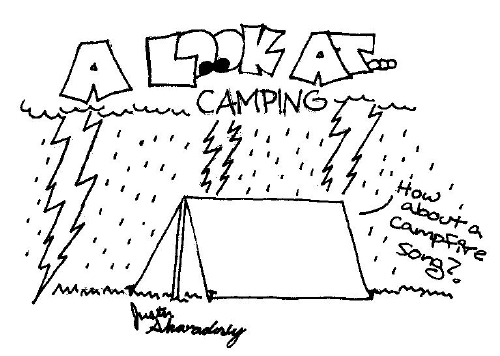 Apparently Mark Twain once said, “Thunder is good, thunder is impressive, but it is the lightning that does the work.”

I will never understand that quote. And I haven’t even pondered the part that says that it’s the lightning that “does the work.” I just wonder how anyone could ever say that thunder is “good.”

Especially after my summertime camping trip.

It all started a few weeks before my birthday, which is on the last day of June. My dad and I were talking on the phone. The conversation went like most did – I asked how work had been going, and he asked me about school (which was about to end at the time).

And then he told me. He got straight to the point and said that he would be coming down in a few weeks to take my brother and I camping for a night, “for my birthday.”

The reason I write the words “for my birthday” in quotes is because I realize that my dad didn’t want to take me camping to celebrate my birthday, specifically. At least, not to celebrate it in the average “cake and presents” kind of way.

But, I have to say that it was a good excuse to get us to spend another night outdoors. Either that, or after 15 years he still doesn’t realize that I am not a son, but a daughter.

You see, my dad doesn’t exactly get the fact that I, an average teenage girl, actually might not want to go camping, especially not on my birthday. But I went anyways.

And he didn’t realize that a fishing pole or a football game for my brother’s Playstation was never high on my list of desired Christmas presents. But I got both from him one year, anyways. But that’s another story.

Besides, since it was my birthday, you would think that I would have gotten to do what I wanted to do, right?

Wrong. A day before my dad was expected to come and pick us up, I realized that there was no way to get out of going now. So I packed my bag, and waited for the inevitable.

My dad came right on time. We were soon on our way to the Misquamicut beach area in the state of Rhode Island, which is about an hour and a half’s drive from my home. The drive was mostly spent reading or engaging in the usual small talk, while my brother and I practically screamed to make ourselves heard over the deafening classic rock station playing in the truck.

When we got to Rhode Island, we immediately went to the campgrounds. It took a while until we secured a site. When we finally did, we went to go inspect it. My dad hated our spot, because it was tiny compared to others around it. So we went back to the main office, and got the exact same one that we had last time we went camping.

The evening went by fine. Nothing worth mentioning really happened – we just checked out the beach for a little while and grabbed a bite to eat at the local Friendly’s.

When we got back to the site, my dad wanted to build a campfire. Little did we know that my dad had a very specific way of placing the wood into the pit, so my brother and I started chucking wood in. And then, a few minutes later my father took it all out, only to start building the fire all over again.

Finally when the fire was satisfyingly large, the three of us sat down at the picnic table to enjoy it. It was actually nice, sitting there in the dim light from the fire, quietly enjoying each other’s company.

Unfortunately the feeling of complete happiness ended all too soon, as most do. Just as I was thinking about the marshmallows that were sitting in a kitchen cabinet at home, I felt the sting on my arm. It was the sting of a bloodthirsty mosquito.

Man, I thought. How could we have forgotten to bring the bug spray?

Soon enough, we were practically being devoured by the little suckers, no matter how hard we tried to fend them off. Eventually I just gave up and went inside the tent.

I was lying there, feeling sorry for myself when my dad and brother came into the huge, family-sized tent. Soon enough, I realized I was the only one awake.

Just as I started to fall asleep, out of nowhere came a sound – a loud grunting sound. It took me a while to comprehend the exact significance of this sound, though. I just figured that it would stop.

Little did I know that my father would be snoring for what seemed like the next two hours.

As just about anyone – including those who have lived with their father or have ever visited him and have had a room anywhere within the same vicinity as his – can attest to, “dad snores” are not your average snores. No, these particular snores are much more loud and obnoxious and harder to ignore, no matter how many sheep you count.

Needless to say, I could not fall asleep. As I lay there trying to ignore the noise, I thought about how it was somewhere around one in the morning of my birthday, and I wasn’t even able to fall asleep.

All of a sudden, my father stopped snoring. You would think I’d be relieved and grateful that something woke him, right?

In actuality, I thought, You have got to be kidding me.

He was woken by an extremely loud boom of thunder, which had followed a bright flash of lightning.

If, after listening to snoring for hours, I had any hope that I would be getting much sleep that night (and morning), it was gone within the next five minutes.

Soon it looked as though lightning bolts were striking the ground around our campsite. And the thunder could only be described as deafening – it seemed to be roaring louder by the minute.

There I was, on my birthday, first not able to sleep because of snoring. And I was trapped in a tent in a thunderstorm.

As most do, the storm got worse before it calmed down. Every time I heard a particularly loud boom of thunder, I muttered, “Should we get in the truck now?”

My dad replied, “Listen, I’ll tell you when we need to go in the car,” as my brother said that it wasn’t even a bad storm.

You see, if I was in my house during the storm I’m sure I would have said the same thing. But because I was lying on the ground, with a thin layer of plastic held up by metal rods protecting me from the lightning, I was just a little afraid.

I know that the chances of us getting hit by lightning were very slim, but even so, I could see the headline that would be in the next morning’s paper – “Three Campers Die in Freak Lightning Storm, On Girl’s 15th Birthday.”

All right. Maybe I was more than a little afraid.

The storm went on for hours. Every so often, it calmed down and I began to drift off to sleep. Then after a large crash, the rain started up again and I once again sat there, very awake. Unfortunately, this cycle went on for most of the morning.

I must have fallen asleep at some point, because I remember waking up again when the sun was up, probably at some unreasonable hour of the morning.

I looked around and could see everything around our campsite, the trees, the dirt, and the sky.

Wait a minute… I thought. And then I realized that my dad and brother had started to take apart the tent, and anyone who walked, drove, or rode their bike down the road could see me sleeping!

You see, our tent has a large vinyl layer that can be strapped over the main structure of the tent, which is basically just metal poles and screens. Once you take off that top layer, you’re exposed to all the elements – including sun, rain, and the eyes of passersby.

“Uh, thanks. Hey dad, why are you taking apart the tent if I’m still in it?”

I never got a sufficient reply to that question. All I know is that they woke up early to go fishing and grab breakfast, which was the donut that was waiting for me in the truck.

We ended up spending the rest of the day at the beach. For once, the Rhode Island water wasn’t mind-numbingly freezing so my brother and I enjoyed most of the day diving in the waves, while my father fished.

After the night I had, I was surprised to say that I was sad when it came time to pack up and go back home. Once again we sat in the truck, surrounded by our stuff as classic rock songs blasted on the radio. And I was actually glad that we took this camping trip together.

And then I looked down and realized that my legs were spotted in a bright shade of red that only sunburn could cause. Of course, I hadn’t put sunscreen on my legs, in hopes that I might turn a color somewhat resembling a tan.

Besides, who gets sunburn on their birthday?