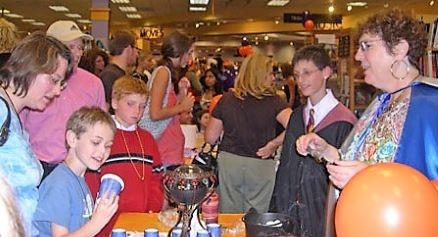 The scene at Border's Bookstore in Farmington, Conn. a couple of hours before the midnight release of the last Harry Potter novel. (Kiernan Majerus-Collins/YJI)

FARMINGTON, Connecticut – No fancy spells were needed to bring mobs of wizard-loving muggles to the local Border’s Bookstore on Friday for the midnight release of the seventh and final installment of the beloved Harry Potter series. 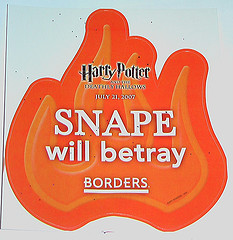 The scene at Border’s Bookstore in Farmington, Conn. a couple of hours before the midnight release of the last Harry Potter novel.Becca Van Stolk-Cooke, a Sedgwick Middle School student in West Hartford, said she came because “I wanted to have fun – and I reserved a Harry Potter book.”
Filled with Harry Potter decorations, contests and games, the store attracted older kids, teenagers and adults.
People were not looking back on the six earlier books. Instead, they were gazing into crystal balls to figure out what would happen in Harry Potter and the Deathly Hallows, the last book in J.K Rowling’s series.
Because Rowling had already said two main characters would bite the dust, much of the speculation was about who would die.
The big question was would it be Harry, the hero, or Voldemort, the villain, who winds up dead in a feud that went back 17 years, the whole of Harry’s life.
“I think Voldemort’s gonna die,” said Perri Silverhart, an eighth grader at West Hartford’s Bristow Middle School.

Van Stolk-Cooke said she thinks “Voldemort and another one of Harry’s friends is going to die.”
A costume contest showcased those who dressed in outfits that included such Potter characters as Sirius Black, Dementors, and Mad-Eye Moody.
In a Harry Potter Spelling Bee, people lined up to try to spell unusual words created by Rowling. It included nearly every word she made up in the series.
“The Great Snape Debate” featured two large groups, one that trusts Snape – the former teacher at Hogwarts, where Harry went to magic school – and the other arguing that Snape would betray the Order of the Phoenix, the anti-Voldemort group protecting Harry.
Mobey Irizarry, a fifth grader at Smith Elementary School in West Hartford, said he believes Snape is loyal and wouldn’t betray Harry.
Irizarry said he is “really curious” to find what happens in the last book, including where Snape’s alliances lie.
“It’s a good thing to celebrate things like Harry Potter,” said Irizarry.
Silverhart said she figured that if she could get her parents to the bookstore party, she’d have a chance to get an early copy of the book.
But whether or not she got the book, Silverhart said that at least she had fun.