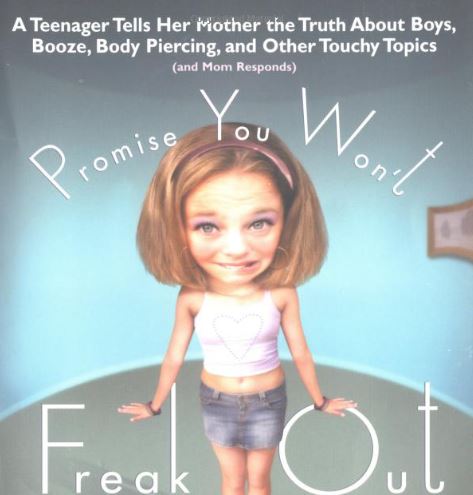 SIMSBURY, Connecticut, U.S.A. — Like most teenagers, I am tired of the stereotype placed on us that we like to rebel against everyone in our lives: parents, teachers, or basically any other higher authority.
It is said that teenagers will experiment with drugs, sex, and alcohol at an all-too-early age. A book discussion last Monday night at the Ethel Walker School for Girls supposedly set the story straight, from an interesting perspective.
Two perspectives, actually. 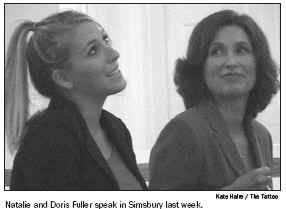 Together, Doris Fuller and her daughter Natalie Fuller wrote Promise You Won’t Freak Out.
In the book, Natalie spills her teenage guts, telling all of our secrets.
Her mom responds with her thoughts and opinions after every one of Natalie’s passages.
Natalie’s little secrets include how we sneak out at night, do drugs, drink alcohol, and have sex with our significant others at every chance we get.
And all this is if you’re one of “the good kids,” according to Natalie’s mother. She later went on to say that every so-called “good” kid is really doing something behind their parents’ backs.
But, luckily, the mother-daughter duo has written this book to help solve the communication problems that have plagued teenagers and their parents for centuries.
They covered a “myriad of subjects” in the book, Doris Fuller said.
The idea for the book came about, Doris Fuller said, after she caught Natalie spending the night at a boy’s house when she was supposed to be at her friend’s house for a sleepover.
“I had been totally clueless,” Doris Fuller said. She said she realized that she “had no clue what [her] daughter was doing.”
Parents see their son or daughter as a perfect child who would never experiment with drugs, or drive home drunk from a party, Doris Fuller said.
“One of my closest friends was drinking too much,” Natalie Fuller said. Later, Natalie’s friend was date-raped by two of the girls’ male friends.
Going to her mom for help would have been hard, Natalie Fuller said, since she wasn’t supposed to be at the party in the first place.
“Sometimes we may not be ready to talk,” the girl said.
Doris said she learned from Natalie that parents can keep a closer eye on their kids by simply calling to check up on them.
“Parents would know so much more if they checked up on us,’ spilled Natalie Fuller.
The teen advised parents to be sure to phone the home where their teenager is allegedly staying – to make sure that they’re really there.
The key to any open relationship with a daughter or son is to be open, Doris Fuller said, and to share secrets with each other.
But why would teenagers want to share secrets with anyone … let alone their parents?
“Everyone needs something private,” Natalie Fuller said. But she said, “Some things do matter” and should be discussed with parents.
Natalie Fuller brought up one good point. Once you stop using lies to get what you want, life becomes less of a hassle.
“It really does make life easier,” she explained to the teenagers in the audience. “It’s easier to tell the truth than to lie.”
It’s more convenient to not have to cover up a trail, she said, or come up with more lies to keep your story going.
Her mother had much to say about how parents should attempt to get information out of their kids, which is something that teenagers might want to know, too.
After all, it’s best to know what you’re going to be up against if your parents read the book.
Doris Fuller suggested that mothers start by talking about their child’s friends. She said that teenagers will gossip about friends to their parents.
Then, the story could turn into a question for their own child.
It’s all about “asking the right questions, saying the right words,” Doris Fuller said.
Asking personal questions directly can be startling to a teenager, and it could make them close up to any other conversation.
To my horror, Doris Fuller also suggested that parents break into their kids instant messaging conversations and email to see what they’ve been doing.
“It’s in their best interest,” she said.
So, what about your parents’ wild days? They were teenagers once, right? What gives them the right to butt-in so much?
“Most of us did these things,” said Doris Fuller, “but the risks were not as high as they are today!”
Doris Fuller was a big advocate for waiting to do or try things such as drugs, getting a tattoo, sex, and alcohol.
“Later is better,” she said. But she went on to say that she was happy that Natalie tried these things in high school as opposed to college because she was still there to protect her, as a safety net.
Doris Fuller said if she could change one thing about how she raised Natalie, she said that she would have “been clearer earlier” on her values for her daughter.
Because Natalie was “a good kid,” her mom assumed too much. “I had no reason not to believe her.”
Parents who attended this discussion came away with an altered view about how all teenagers act. It was just another way to stereotype all teenagers into one more drug-loving, sex-having, alcohol-drinking group.
Yes, there are teenagers who do these things. But one thing that Doris Fuller said at the beginning of the talk really stuck with me. She said they were now going to talk about “what all ‘good’ kids are doing behind their parents’ back!”
Doris Fuller, you’re wrong. I’m sure that more than one ‘good’ kid is reading this article – and doesn’t partake in those activities.
This book discussion was supposed to bring out the truth – and the views of teenagers and their parents. It was to better communication between the adults and teenagers. Instead, our generation was burdened with even more stereotypes.
Perhaps there was a communication error between mother and daughter, but I feel as though Doris Fuller’s ideas would only work for teenagers like Natalie.