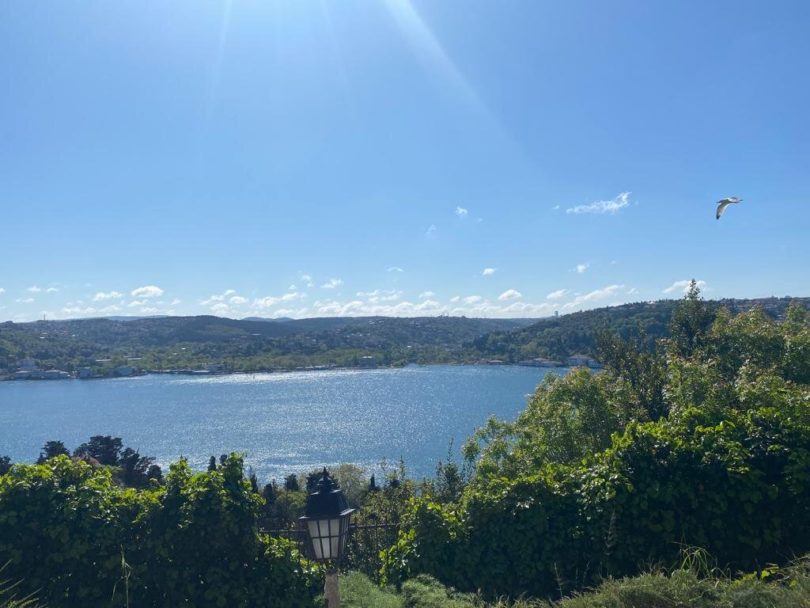 A view of the Sea of Marmara from the Aşiyan Museum in Bebek on the European side of Istanbul. (Naz Mergen/YJI)

ISTANBUL – The continent you are in – Europe or Asia – can change in half an hour.

Istanbul is in both Europe and Asia and is divided by a bridge. I live in the Asia region, more specifically in Erenköy. But it takes only half an hour by ferry and I am on the European side.

Istanbul is a crowded city with a population of more than 15 million. There are people everywhere, which means there is constant traffic. People are always trying to rush to one place so they can do more than one thing in a day.

Istanbul does not have many green spaces because the population is bigger than the space we have.

But in Erenköy, we have many parks. I can see a park from my bedroom window and it is only a 2-minute walk from my house. The parks here are places where many students gather, like my friends and me.

To add to this, in these parks we have a lot of cats which are being taken care of by the people who live nearby. You can also see a lot of people walking their dogs, especially in the morning.

When you look at the history and architecture of Istanbul, it seems amazing.

But in reality, people living in Istanbul do not take care of the city. A lot of people who live here are careless with what they have.

Just recently, we had a problem with our sea, the Sea of Marmara, because it was so dirty and had such a bad color. That was because we do not take care of it and dump chemicals, factory waste, and even clothes, shoes, and plastic bags into it.

People are too lazy to go to the garbage can.

They think nothing bad will happen to them because they do not think about the future – they only care about the moment.

This lifestyle may be good in some cases, but the place where we live deserves for us to think about the whole environment and take pride in what we have. It’s more important than just thinking about ourselves.

Istanbul has 39 provinces, and even in those, people and places change a lot.

Erenköy, the province where I live, is a better educated area than many parts of the city. People are more considerate and sincere in Erenköy, so I feel at home there.

Naz Mergen is a Junior Reporter with Youth Journalism International.

Naz Mergen is a Junior Reporter with Youth Journalism International from Istanbul, Turkey.