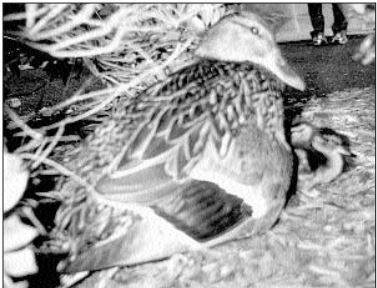 “They didn’t hurt anyone,” said Bristol Eastern High School student Kelly Bolduc, who fed the ducks. “They were really special, because they were almost like Eastern’s mascots. Everyone loved them.”

Though no ducks have been spotted in the courtyards yet this fall, science teacher Elizabeth DiLearnia, who is advisor to the school’s Conservation Club, expects to see them again.

“They most definitely will come back,” said DiLearnia, who was involved in caring for the ducklings last year before they died.

DiLearnia recounted what happened that May weekend.

DiLearnia said that on Friday, “the ducks were fine – they had water and food. Then on Monday morning, they were all dead, except for the one duckling.”

DiLearnia said the controversy over whether the ducks should be given food or water started when Principal Everett Lyons said no one was “allowed to help them” last spring.

“It was getting to be a potential health hazard, especially last year when there was so many ducks,” Lyons said last spring.

Lyons said a teacher counted 100 ducks in the courtyard two years ago.

Sometime last spring, someone at the school contacted the Connecticut Department of Environmental Protection about the ducks. DiLearnia said Lyons talked to the DEP, and Lyons said DiLearnia called the agency.

But according to both Lyons and DiLearnia, the DEP advised them not to give the ducks food or water.

“If it came down to that, I said that I would relocate them,” DiLearnia said.

Min Huang, migratory game bird technician for the DEP, explained why school officials would be told not to feed the ducks.

“Ducks shouldn’t be fed by humans at all,” Huang said. “Birds have different nutritional requirements than humans, and their needs change depending on the time of year.”

He said that if a duck is fed human food frequently it could experience a lower life expectancy, reproduction rate or level of energy, making it more accessible to predators. Also, it could develop deformities.

“Over the last 20 years, we’ve developed a non- migratory population (of waterfowl),” Swanson said. “There’s a big push from the state to not feed ducks; they’d rather have a duck migrate and learn to find food on its own.”

Concerned about the plight of the ducks, students started a petition last spring, according to DiLearnia. The petition, which eventually amassed more than 600 signatures, asked that the school continue to feed the birds, DiLearnia said.

Because of the petition, Lyons said he agreed “to give them a sufficient supply of water,” adding that the ducks would be able to find an adequate amount of food.

After that, a group of people – including students, DiLearnia, and special education teacher Patricia Coley – fed the ducks and gave them water. Someone put out a small child’s swimming pool with a ramp leading up it and a shallow water dish for the courtyard residents.

DiLearnia said she gave the mother and her ducklings food and water on a Friday in early May, as usual.

But “the water was gone on that Monday morning,” Coley said.

The little wading pool was gone, too.

All but one of the ducks in the courtyard died, DiLearnia said.

DiLearnia took the surviving duckling to a bird and animal hospital, where she said the diagnosis was extreme dehydration.

News of the deaths upset students and teachers.

“It think it (is) really sad,” said sophomore Mackenzie Goodrich. “They were really cute.”

Coley agreed that the outcome was a sad one.

“I loved it when the ducks were here,” Coley said. “I think that they added a certain kindness to the school. I mean, I’ve watched the hardest kids sit on those benches and watch the ducks, and they smile.”

“We don’t know exactly what happened to the ducks,” the principal said.

Despite the fact that the water was taken away over the weekend, Lyons said, perhaps the pool was too shallow for the ducklings to get into once they had climbed up the ramp. If that was the case, he suggested, they would not be able to reach the water to drink it.

“I definitely think that one of the principals had something to do with it,” Bolduc said. “I really think it was just something to hurt the students.”

Huang said that there are health issues with ducks being in an enclosed area. Specifically, he said that birds act as a host for various types of bacteria, some of which could be harmful to humans.

Swanson also said that there may have been certain health risks associated with the ducks, such as infections caused by the bacteria E. coli, especially if students were often in contact with the birds.

As for his theory on the deaths, Swanson said, “That’s an awfully short time for them to die of dehydration. My guess is that someone harassed them, which would increase their heart rate and possibly cause them to become dehydrated faster.”

Although the water was gone that Monday morning, Coley said she believed the ducks died of “natural causes.” She said the cool weather could have been a factor in the duck’s deaths.

“If anything, it was a mistake – a big mistake,” said DiLearnia. “Maybe someone unknowingly took the water away. I really don’t know.”

Late in June, on the last day of the school year, DiLearnia and a few other teachers moved some of the ducks that had been flying in and out of other courtyards at the school to a stream that runs through the parking lot. Once the ducks were released, DiLearnia said, they stopped feeding them.

It wasn’t the first time that school staff and students rallied to protect their feathered friends.

In 1999, ducklings got stuck after slipping between the metal sewer grate in a courtyard.

Two of the school’s custodians and two other caretakers lifted the gate and were able to lift the ducklings out, according to “Make way for ducklings!,” a story by Merissa Mastropiero published in The Tattoo on May 10, 1999.

Then janitors proceeded to lead the ducklings and their mother out of the courtyard and through the building to a nearby stream. When one of the ducklings seemed ill and unable to swim, custodians picked him up and put him in a box under a heat lamp. Janitor Chad Lockhart took care of the little duckling, Mastropiero reported.

Given that they’ve been a presence at the school for at least seven years, the ducks are expected to return.

“Female ducks will always come back to an area where they had a high success rate of nesting, or to where they were hatched,” Huang said.

DiLearnia and the Conservation Club, a group of environmentally conscious students, have a plan for when the ducks return.

According to DiLearnia, the relocation of returning ducks will ultimately be one of the club’s goals.

When the ducks do come back, “depending on the conditions of the courtyard,” DiLearnia said she might talk to Lyons to see if the ducks could be fed temporarily, until they were relocated.

Coley said that if the ducks do come back this year, they will be welcomed.

“Just watching the ducks – it was one of those little things that made everyone happy,” Coley said.