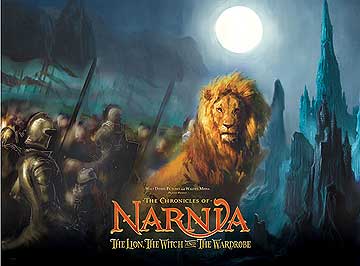 DUBLIN, Ireland — This Christmas sees the release of The Chronicles of Narnia: The Lion, the Witch and the Wardrobe, the first of C.S. Lewis’ beloved series to be adapted for the big screen.

This fantasy tale has been widely compared to Peter Jackson’s Lord of the Rings trilogy, but the story of the world in the wardrobe fails to live up to the Middle Earth epic.

Directed by Andrew Adamson, Narnia will please traditionalists as it clings rigidly to Lewis’ story line.

Four children — Peter, Susan, Edmund and Lucy– are evacuated from London during World War II and find themselves in a huge mansion in the countryside where Lucy, the youngest, discovers a wardrobe leading to another world, populated by fauns, beavers, centaurs and much more.

This land of Narnia is trapped in perpetual winter, under the evil reign of the White Witch. The four join with Aslan the lion (Liam Neeson), messiah of Narnia and fight the forces of evil.

Unlike Harry Potter or Lord of the Rings, Narnia is very much a children’s film and remains so throughout.

The first half hour is slow-moving and tedious. The main characters leave a lot to be desired in the acting department, with the exception of Georgie Henley who delivers a charming performance as Lucy. Tilda Swinton is also worthy of mention for her powerful portrayal of the White Witch.

Another major weakness was the CGI (Computer Generated Imagery), which was central to the overall effect, considering that several prominent characters, including Aslan, are talking animals. The battle animation was up to scratch but in quieter scenes the facial expressions and actions of the animals were unconvincing.

One of the highlights of the film is the final battle sequence which takes place in a green valley under blue skies where the forces of good, complete with shining armour and heroic deeds challenge the White Witch’s evil horde.

The story itself is, of course, a much-loved children’s classic and the magical atmosphere of the book is maintained. However, for some the heavy-handed religious connotations might be somewhat off-putting.

Overall this is an impressive adaptation of a classic tale which stays true to Lewis’ original vision and is a good family film.

Unfortunately it’s brought down by a series of basic flaws which prevent it from fulfilling its potential.

Niamh Ni Mhaoileoin is a Reporter for Youth Journalism International.