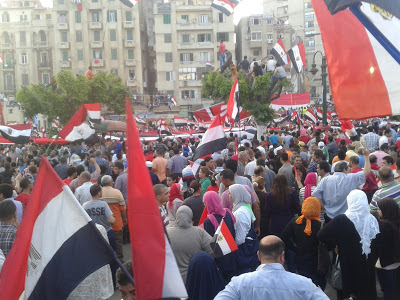 Protests in Alexandria on Sunday. (Dina El Halawany/YJI)
COLUMBUS, Ohio, U.S.A. — The long anticipated 30th of June is here and people all over the world are watching, including myself on an online live stream of Egyptian channels (Some channels through nine different split screens), Twitter and Facebook newsfeeds of friends already there.
Reporters have been describing the protests in the millions, as the biggest in the history of Egypt, even bigger than those in January 2011. Some news sources even claim that these have been “the largest number of protesters in a political event in the history of mankind.”

June 30th was declared by The Tamarod (Rebel) Campaign as a day for all Egyptians to come together for a unified goal, an element missing in many previous demonstrations. Tamarod has gathered over 22 million signatures of Egyptians ready to impeach and rebel against Morsi. It also asked protesters to chant only against the Muslim Brotherhood and hold only flags of Egypt to ensure unity
among a people who since the initial revolt on January 25, 2011 have grown more and more divided.
Today’s demonstrations are one of hundreds that have taken place since Morsi has been in power. However, there is an element the others lacked. Today, people are united in huge numbers for one unified purpose: to the end the rule of the Muslim Brotherhood and claim Egypt once more.
Once again the protests flood with women and men, elders and children, and people of all faiths.
Among the crucial factors of today’s demonstrations is how widespread they are throughout Egypt. Most news sources will air or show pictures from only Cairo and Alexandria. People have packed the streets completely in front of the Presidential Palace, in squares, in front of their homes and even in Paris, Sydney, Toronto, Washington and Austria, places where many Egyptian expats live.
Today, in Egypt, people in Suez, in Mansoura, in Mahala, in Tanta, in Port Said and so many more have taken to the streets one more time.
Many have tried to give the Muslim Brotherhood and the person they nominated for president, Mohamed Morsi, a chance to demonstrate his ability to lead post-revolution Egypt.
However, Morsi has failed all of Egypt, furthermore, his Brotherhood has committed heinous crimes betraying a people’s whose revolution gave him freedom from jail.
Muslim Brotherhood loyalists have tortured innocents, arrested journalists and created an Egypt which only they own. Worst of all, they have divided the people into good and bad, Muslim and atheist (which is used an insult), pro-God and the Brotherhood or anti-God.
This is not the reality the people in the streets today are willing to accept and despite all threats, peacefully march to get their voice heard.
The government has been using the same misleading, conspiracy theories and labeling techniques as former leader Hosni Mubarak’s dictatorship regime. Morsi’s minions stubbornly  insist that everyone
against them is out to destroy the country’s stability, claiming they are motivated by an unknown outside source.
Morsi gave an almost three-hour long speech Wednesday warning people and brandishing his non-existent “accomplishments” to a cheering crowd. Fortunately, this speech further infuriated the people and drove more people to take matters into their own hands.
The same streets that brought down a dictator of 30 years will bring down Morsi because there is one thing Morsi’s argument of “legitimacy through the election box” lacks,: it is that the people own that legitimacy.
In the spirit of unity, it must also be said that there are many who blindly
support the Brotherhood and there is another relatively big pro-Morisi demonstration.
There are also many in the demonstrations who are pro-Mubararak and took to the streets to voice their anger against the Brotherhood.
However, Mubarak and Morsi are different faces of the same coin, one that Egypt will no longer stand for.  It is more than angry protests, it is an ongoing collective demand to the overthrow of this regime
Egyptians have not tackled one modern Pharaoh to allow the rise of the next . Today’s demonstrations signal that the end is very near.
What happens next? A referendum?  Violence? A military take over? No one knows for sure.
Whatever that “next” thing is, though, it will be met by an unstoppable force: the people.  And the people will prevail.
Jessica Elsayed is Associate Editor for  Youth Journalism International.
Read up on the revolution. Links to YJI’s comprehensive, award-winning coverage are here. 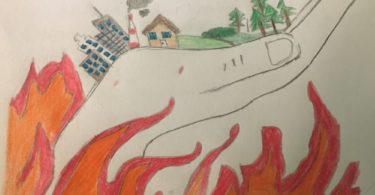 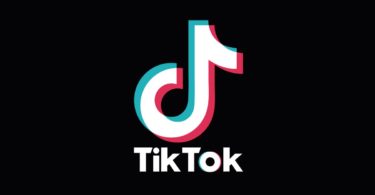