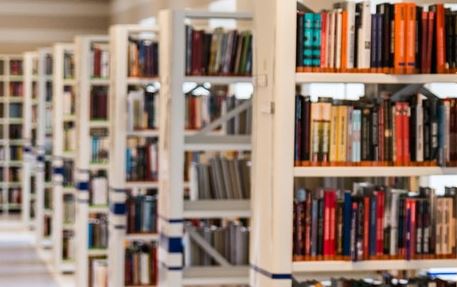 BRISTOL, Connecticut, U.S.A. — One of a wave of new staff at Bristol Eastern High School, Elaine Carmelich is the high school’s new library media specialist, and, according to students and staff, she’s bringing the library out of the dark.

“It’s so much more pleasant now,” said Pamela Hayward, Eastern English teacher and Bristol’s 97-98 teacher of the year. Hayward said that she spent little time in the library before this year.

“The library is much more accessible this year,” said Dorothy Ammerman, an Eastern English teacher. Ammerman said the library should be a place students and teachers feel they can go to make use of materials for curriculum assistance.

“She’s very well qualified and is doing a wonderful job with the position,” said V. Everett Lyons, Eastern’s principal. “The students really seem to be responding to her.”

“I love it. I really do,” said Carmelich of her new position. “I just really enjoy interacting with the kids and helping them in any way I can.”

“It was terrible with Dr. Leahy,” said senior Jessica Zarrella. “His official policy for library passes was that you had to gather into a giant line before the bell, make eye contact with him, and state your name, period and class number. In that order. God help you if you said your period first. Once he sent me to the back of the line because I didn’t make eye contact.”

Carmelich said she became a librarian because she loves to read and wanted to help others learn to love literature. She said she was aware coming into the position that students didn’t see the library as a place they could come to freely.

She wanted to change that.

Toward that end, Carmelich is welcoming students with study halls to visit the library, opening the previously restricted Internet consoles to any students in need, and personally assisting staff and students in research and curriculum development.

To make the library a more comfortable place, Carmelich said, she brought in several plants, placing them about the library, and constructed a welcome banner for library students.

Suzanne Davis, library media assistant, said the change in the atmosphere is palpable.

“You know that she does differently [than Leahy]? She listens. She really listens to the students,” said Davis. “Paperwork is secondary to her. She’ll stay late if it means helping out the students.”

Davis said that she knew things were changing for the better when she saw Carmelich standing in the hall one morning. When asked what she was doing, Carmelich replied that she wanted to greet the students.

Every period since, said Davis, she’s walked out to the hall and greeted students as classes change.

Carmelich is a graduate of Southern Connecticut State University. There, in her “mid-30s,” she earned her master’s in library science, a goal she had postponed for years for various reasons.

In her free time, said Carmelich, she does a lot of reading, mostly women authors like Barbara Kingsolver, Elizabeth Berg and Amy Tan.

Carmelich held library positions in several other school systems, including New Hartford and Clinton, Conn., before spotting the job in the newspaper in early July. After an interview by a council consisting of Eastern administrators, teachers, parents and students, Carmelich won the position.

Learning that Eastern operates on a block scheduling system didn’t intimidate her at all, said Carmelich. “I think the block, with 84 minutes as opposed to 45, allows more time for productive library research.”

After renovations, the library will be moved to the first floor and opened to the general public in the evenings.

Of the construction and future plans, Carmelich said, “I look around and I say: ‘Well, the computers aren’t fancy, and there’s no carpet, but the students and staff are warm and friendly, and I’m excited that I’ll have a new library, really get to plan it from the ground up.’ I think opening it to the public is wonderful. It sends the right message.”