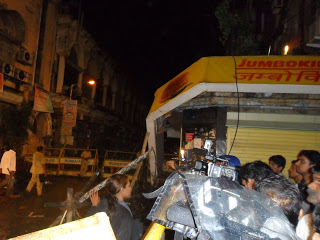 MUMBAI, India — Terror is back in Mumbai.
In a posh neighborhood in the heart of the city late Wednesday, shattered glass filled a narrow alleyway as a heavy monsoon washed away the blood of bomb victims struck down on their way home from work.
After a peaceful two years without an attack, terrorists struck India’s sprawling financial capital Wednesday, killing at least 18 and sending more than 130 to the 13 area hospitals.

This time, a series of three blasts hit different parts of the city about 7 p.m., witnesses said, striking a deadly blow during a typically congested rush hour.

Businessman Hemant Mehta was about 100 feet away at a tea stall when the bomb went off in the Opera House neighborhood.
The sound of the blast was“deafening,” Mehta said, adding that he saw “bodies strewn everywhere” and people running away out of panic.”
Dr. S. Binnani, who has a clinic near the site of the Opera House blast, escaped death by a whisker.
Binnani was on his way to the Opera House neighborhood about the time of the blasts occurred, but was running a few minutes late.
“When people go out of their homes,” Binnani said, “they are not sure they will come back.”
According to Binnani, the police took 45 minutes to reach the spot, but the ambulances arrived within five to 10 minutes.
And some people were rushing victims to the nearest hospitals in whatever vehicle they could find, Binnani said.
The bombs went off between 6:50 p.m. and 7:05 p.m., the witnesses said.
The timing clearly indicates the motive to inflict maximum casualties as three blast sites — the diamond district of Zaveri Bazaar, a short distance from the busy railway station at Dadar and Opera House — are the busiest areas of the city during rush hour.
Police at the scene said they were investigating the possibility that Improvised Explosive Devices, or IEDs, were used in the blasts.
Ammonium nitrate with timers was used to construct the bombs, authorities said early Thursday.
The bomb detection squad was examining the cordoned-off area and the vehicles which bore the impact of the explosion were covered by tarpaulin.
It is monsoon season in Mumbai and the heavy rains might not be helping the forensics team at the site.
Hours after the attack, around half past midnight, Union Minister of Home Affairs P. Chidambaram, along with Chief Minister of Maharashtra Prithviraj Chavan, visited the chaotic site.
Chavan, who also visited the two other blast sites with Chidambaram, said the intensity of the blast was highest at the Opera House.
At the Opera House site, it became evident that Mumbaikars have become inured to tragedies like this.
Neighborhood residents were distributing water, tea, and biscuits to the cops on duty and occasionally, to members of the press.
Today’s attack comes just two days after the fifth anniversary of the 2006 serial bomb blasts on Mumbai’s suburban trains.
“Post-2008, government is basking in glory that nothing has happened,” said Mehta. “But it was because people at the other end did nothing.”
Would the people of Mumbai be cowed after the latest attack on their business district?
Mehta, himself in the profession of finance, thinks not.
But he adds, “Sad part is, life will continue, but with a lot of pain and disdain.”
For his part, the doctor was visibly enraged.
“They had challenged that they will do it again, and they are doing it,” Binnani said.
Video shot by Pushkal Shivam at the scene of the bomb in the Opera House neighborhood.