Hartford, Conn., U.S.A. – There was a bullet hole in the window, graffiti on the cinder block walls and a general feeling of misery in the air.
It was another day at the fictional Malcolm X High School in the Bronx, as depicted “No Child…”, now showing at TheaterWorks in Hartford.
With its colorful language, “No Child…” excited the audience with the story of poor, black students at the crumbling high school in New York City. 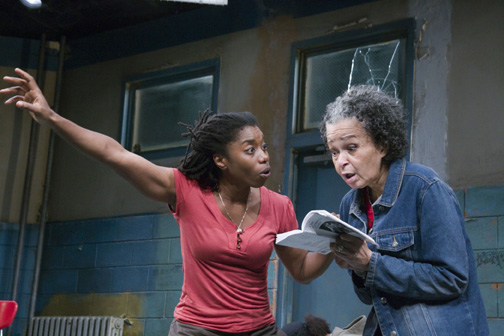 Scene from “No Child…” production at TheaterWorks in Hartford, Conn., USA (TheaterWorks)

As a group, they were loud, street-smart, back-talking and trapped.
Jerome, the leader of the group, swore profusely and set the agenda for the class.
Shandrika, the epitome of attitude, said what she wanted, liked and disliked with no volume control.
Then there was Chris, who was outspoken but always had different opinions from the rest of the class. In other words, he was the nerd.
Ms. Kennedy, the principal, was like a drill sergeant. She constantly yelled at the teens to keep them in order, if only for a few minutes.
The main character was Ms. Sun, the namesake of “No Child…” playwright Nilaja Sun.
Ms. Sun was an acting teacher who tried to get the kindly but weak Ms. Tam’s class to do a play called “Our Country’s Good,” which is about English prisoners putting on a play while jailed in Australia.
The school had a variety of lively personalities. But that’s not what made “No Child…” a triumph.
The actors played their parts in an unusual way. Each actor – except for Donnetta Lavinia Grays, who played Ms. Sun – played several characters, often one after the other in rapid succession.
Though each actor played multiple roles without a change of costume, they definitely pulled it off, flowing into each of their parts. Anthony Mark Stockard, who played five substantially different personalities, actually made the audience believe he was switching genders.
Nilaja Sun’s depiction of teens was spot-on. Even in wealthier suburban schools, there are teens who shout, swear and jump up on tables and chairs, refusing to do any work.
“No Child…..” shows how the teachers can have no control over the students who walk all over them, leaving and coming to class when they please. It showed how the principal is usually power-hungry and doesn’t give the kids options, just orders them around.
The signs at TheaterWorks promised that the performance would show what’s really happening in schools, and even the ending was mostly real, not a Disney ending. But what wasn’t real was how the play made it seem like just one teacher could change everything in six weeks.
Even Ms. Sun said, “We have been totally abandoning kids for 30 years.” So actually teaching them would take much longer than a month or two and would require many more people.
But hopefully “No Child…” will get people to start helping and believing that it can be done.

Wesley Saxena is a Senior Reporter and Kiernan Majerus-Collins is a Reporter, both for Youth Journalism International.