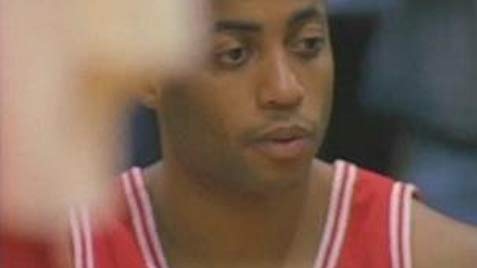 AVON, Connecticut, U.S.A. — The first word that comes to my mind about former University of Indiana Hoosiers Basketball Coach Bobby Knight is “intense.”
ESPN’s first original motion picture, “A Season on the Brink,” chronicles Coach Bobby Knight and Indiana ’s 1985-1986 season.
The made-for-TV movie demonstrates Knight’s temper on the basketball court and reveals his soft side off the court – and does a credible job of portraying Knight, played perfectly by actor Brian Dennehy. He even looks frighteningly like the coach when he loses his temper.
Not only does “A Season of Upsets” tell Knight’s story well but it tells the individual stories of his players and the university’s basketball program, too.
ESPN excelled in not making the movie just a bunch of basketball games put together.
There is insight and drama as well.
Knight’s outrage at players, officials, and the press is uncensored. The adult language was necessary to accurately depict Knight and his temper.
The original movie will air on ESPN while ESPN2 will show an edited version to cover up some of the language.
Additionally, each segment of the movie begins with Dennehy as Knight further revealing “Knight-isms” such as: “Nice is for women’s magazines,” and “People want to win, and you can’t get there with milk and cookies.”
Other parts of the movie that are interesting are the interviews with Indiana fans and Bloomington , Indiana residents who know Knight and hear about him all the time.
There was no doubt in anyone’s mind that he was a great coach, but some people thought that Knight was too harsh on his players and that his temper got out of hand at times. There were others who were all for Knight’s “Do it right every time or else I’ll be on your ass in a second” attitude.
Of course, there were those who couldn’t make up their minds on which side they wanted to take.
However, it was evident from the film that almost every young boy in the state of Indiana dreamed of playing for Knight.
“A Season on the Brink” demonstrates the respect that people had for Knight in Indiana and the disrespectful chants that he received at other universities.
During Knight’s tenure at Indiana he continuously lost his temper. He earned the nickname “The General” for being harsher than an army general on his players.
Knight was more than just an intimidator, though.
He had a huge heart off the court and he was and still is one of the best basketball coaches ever.
In 35 years of coaching Knight has almost 800 career wins, three national championships and an Olympic gold medal.
As demonstrated through the movie Knight always was willing to talk with his players and help them out either with basketball or life.
“A Season on the Brink” ends with famous clips of Bobby Knight – showing him in tirades or being funny or, the best ones, being sarcastic.
This movie offers many aspects of Bobby Knight and basketball.
All the hype that this movie has received with endless advertisement was worth it.
“A Season on the Brink” can be enjoyed by both the sports fanatic and the “non-sports lover.”
The movie airs on ESPN and ESPN2 at 8 p.m. Sunday, March 10 and at various times in the days following.