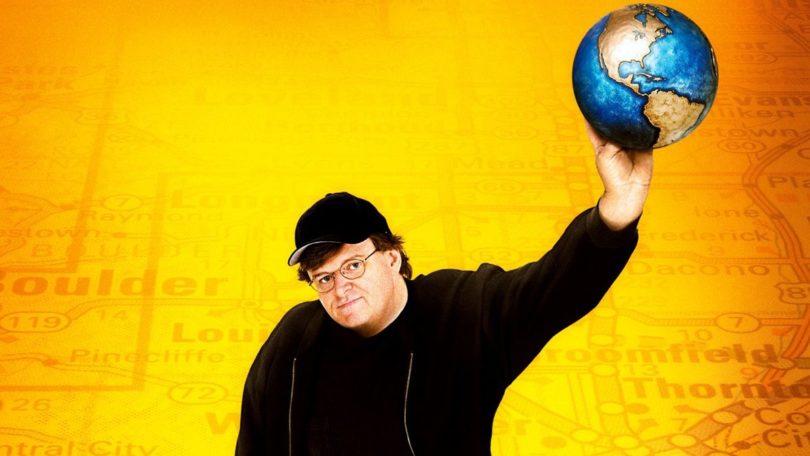 Aurora, Nebraska, UNITED STATES — Documentary. The word usually brings visions of sitting in a stuffy school classroom watching a “video” (not a movie) where some old British guy talks about some historic event in a monotone voice as you fight the urge to fall asleep on your desk.

Well, that’s not exactly the way Michael Moore — the producer, director and writer of the Oscar winning documentary “Bowling for Columbine” — does it.

The documentary covers, among its many topics, the ever controversial issue of gun control in America .

Instead of taking an approach along the lines of “if we don’t stop people from buying guns then they are all going to kill us,” Moore , as a member of the National Rifle Association, instead takes a comical approach to the serious topic.

The film opens with Moore walking into a bank and simply saying “I want the account where I can get the free gun.

I’m not kidding, folks, there is a bank in Michigan where if you open a deposit account, you can get an actual rifle from the teller.

As I watch this “GUNS IN A BANK!? ARE YOU IDIOTS?!” flashes through my mind a billion times a second.

As the film progresses, Moore intertwines interviews of normal people, whose lives have been affected by guns, including interviews with a father of a victim of the Columbine massacre and NRA president and movie star Charlton Heston and an encounter with a not-so-nice Dick Clark, the man responsible for American Bandstand.

The film is packed with information, such as that the year before the film in the United States of American 11,127 people were killed by people using guns while less than 200 Canadians died from gunshots the same year.

Then the question of “why is America so violent?” is posed, creating an even more stirring atmosphere throughout the movie.

But perhaps the most triumphant aspect of the movie is when paralyzed victims of the Columbine massacre contact Moore and ask him to help them “return” the bullets that are lodged into the bodies.

Over the next two days, Moore flies the victims to him and, from there, proceeds to assist them by taking them to K-Marts national headquarters — since the bullets used at Columbine having been bought at a K-Mart store.

The next day, after the meeting with K-Mart representatives, the chain announced it would stop selling ammunitions within 90 days.

“Bowling for Columbine” is not your average documentary and it’s definitely worth renting or buying it.

In my personal opinion this film is deserving of every award it has received and deserves to be seen by everyone.