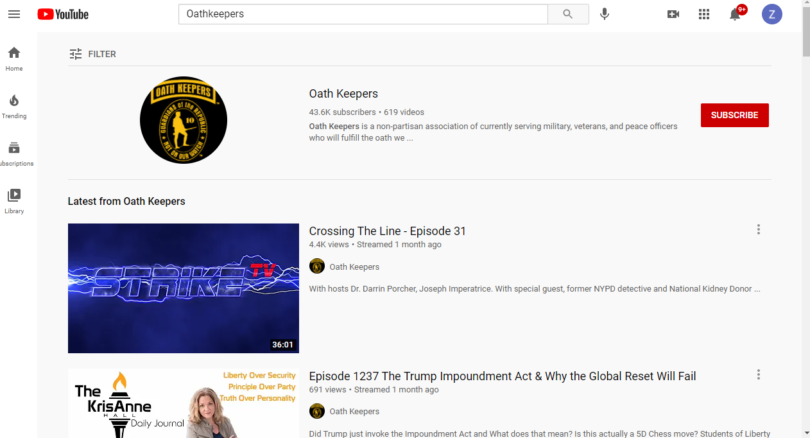 Screenshot of a YouTube search for "Oath Keepers." (Zurie Pope/YJI)

Piqua, Ohio, U.S.A. – Working to combat political extremism since the January 6 assault on Capitol Hill, corporations and government entities are making inroads toward solving the problem.

Combating domestic terrorism has been at the forefront of President Joe Biden’s platform since the incident, and social media companies like Twitter are removing some extremists from their platforms.

The Oath Keepers – a far-right militia whose members are accused of planning the Capitol attack – are among the groups being impacted.

But the group’s material is still available on YouTube.

If a person typed “Oath Keepers” into the YouTube search bar would, the first result is not a video debunking their rhetoric. Instead, there’s the organization’s black and gold logo, and a link directly to their YouTube channel.

Not only is their channel the first result, but also the second and third, showcasing to the viewer their latest uploads.

Despite Biden being declared the victor of the 2020 election – and no evidence of voting irregularities found – Kris Anne Hall, who hosts the flagship program on the Oath Keepers channel, continuously spreads misinformation about voter fraud.

On January 5, in a video titled, “What if there is no official president on Jan 20,” Hall claimed that Georgia Secretary of State Brad Raffensperger is “suppressing evidence” of voter fraud and said he is “refusing” to “do a proper forensic audit on this.”

Three audits were conducted by Georgia officials, who found no voter fraud.

In the same episode of her show, Hall repeatedly calls Biden a “communist,” and the Democrats “those who hate America,” claiming that “as the oppression becomes greater and greater, as the heat gets hotter and hotter, there will be more people who will stand,” emphasizing the importance of “taking back” state and local governments.

This rhetoric echoes the language used by Thomas Edward Caldwell, a Virginia member of the Oath Keepers who – along with several others – was arrested for plotting to attack the Capitol.

In Facebook messages obtained by the FBI, Caldwell allegedly said, “We need to do this at the local level,” he allegedly messaged. “Lets (sic) storm the capitol in Ohio. Tell me when!”

On the same day as the assault, Hall railed on her Facebook page, making unfounded claims of election fraud and telling supporters to reject any result that didn’t affirm their belief that Donald Trump was the true winner.

It’s unclear why the Oath Keepers have been allowed access to YouTube viewers when some other extremist groups have not. When a user types “proud boys” into the search bar, the majority of results are from reputable news organizations, with Proud Boys channels nowhere to be seen.

After a Youth Journalism International reporter alerted Google about this discrepancy, that particular Oath Keepers video was removed, while their channel remained.

Ivy Choi, a spokeswoman for Google, which owns YouTube, said in an email, “We removed this video for violating our presidential election integrity policy.” She said the company is trying to take down content that violates its guidelines and elevate reputably sourced material instead.

Despite that one video being removed, the channel itself is still easily accessible.

Choi did not respond to a follow up email asking why the channel – with multiple other videos including the same type of content – remained in place.