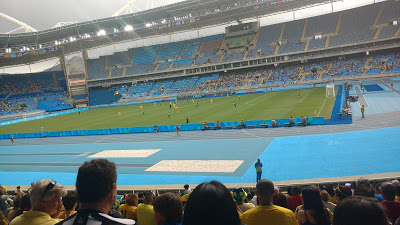 Traffic near the Olympic stadium was intense in some parts, because one lane is exclusively for Oympic use. That’s caused some complaints by taxi drivers and local residents, who face fines of $1,500 Brazilian real, or almost $465 U.S. dollars if caught using it without proper permission.

A match between women’s football teams from Brazil and China followed the game between Sweden and South Africa. (Mariana Prince Cardoso/YJI)

The audience for the 1 p.m. game between Sweden and South Africa was small. Many of those present were Brazilians and supported the South African team, but the Swedes were the fans doing most of the singing.
Sweden was the first team to score in the competition and won the game 1-0.

During the women’s football match between Sweden and South Africa on Wednesday. (Mariana Prince Cardoso/YJI)

At the same stadium, the match between Brazil and China took place at 4 p.m.

The Brazilian team dominated from the start and had the support of almost all the 28,000 fans. Many times Brazilian fans chanted cries of support for the
Brazilian team, especially after the goals.
The game ended at 3-0 and the celebration continued in the streets around the stadium.
Mariana Prince Cardoso is a Reporter for Youth Journalism International. 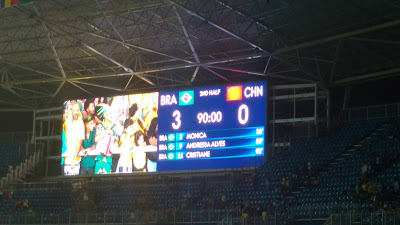 ***
Your tax-deductible contributions make you a winner!
They help students served by this non-profit organization.
Thanks for being awesome!
HelpYJI.org