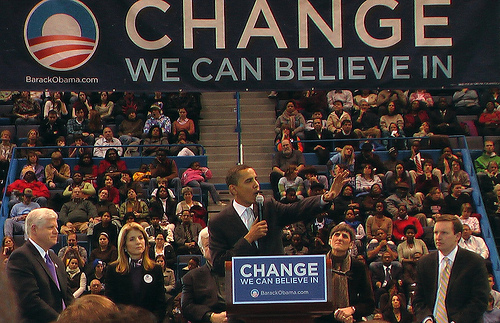 HARTFORD, Connecticut, U.S.A. – By mid-afternoon, a long line of Barack Obama supporters stretched over several city blocks from the Hartford Civic Center as adults and children alike stood in the frigid Connecticut air, patiently waiting for their candidate’s words of warmth.
The line wound through the Civic Center doors and down the stairs to the entrance of the arena where Obama’s rally was taking place.
Once through the doors, the feeling of intensity is overwhelming.
“It’s surreal,” said Obama campaign volunteer, Miri Knight.
Large clusters of people were scattered throughout the stands in the arena, wielding “Change we can believe in” signs. Large “Yes We Can,” “Hope” and “Change” signs were blazoned on the walls of the arena, calling out the ideas of Obama.
On one side of the arena, a fenced-in area for the press housed a camera platform on top of the ice rink, which was covered with boards. On the other side was a raised stage that Obama and his sponsors used to deliver their speeches.
As the hours ticked by, a steady stream of supporters, reporters, photographers and camera crews came through the arena doors.
By five o’clock, there were only a couple dozen empty stands, the stage was surrounded and the “press pen” was packed.
Even before Obama made his appearance, the crowd was going completely bonkers. Every so often, enthusiastic chants of “Obama!” and “Yes we can!” could be easily heard thundering off the arena walls.
At one point, everyone in the stands participated in a group “wave” that actually traveled completely around the arena seven times.
Many of the speakers, including Obama, rejoiced in the fact that Democrats would not have to deal with President George Bush anymore.
“What ever else happens, George Bush will not be on the ballot!” Obama exclaimed to exuberant cheers towards the beginning of his speech.
Almost every two minutes as Obama continued, there were deafening applauses and short bursts of laughter at his witty remarks.
The crowd that surrounded the stage were die-hard Obama supporters, willing to stand up through the whole thing.
On the stage with Obama, Murphy, U.S. Sen. Ted Kennedy, his niece Caroline Kennedy, U.S. Reps. John Larson and Rosa DeLauro, there was a woman who translated Obama’s speech into sign language.
In the press pen, there were reporters translating the speech into other languages. Supporters strained to be recorded by the many news stations that were broadcasting Obama’s speech live.
There wasn’t a single second that passed without a camera flash.

Wesley Saxena is a Reporter in Connecticut for Youth Journalism International. YJI’s Luke Pearson and Kiernan Majerus-Collins contributed to this report.