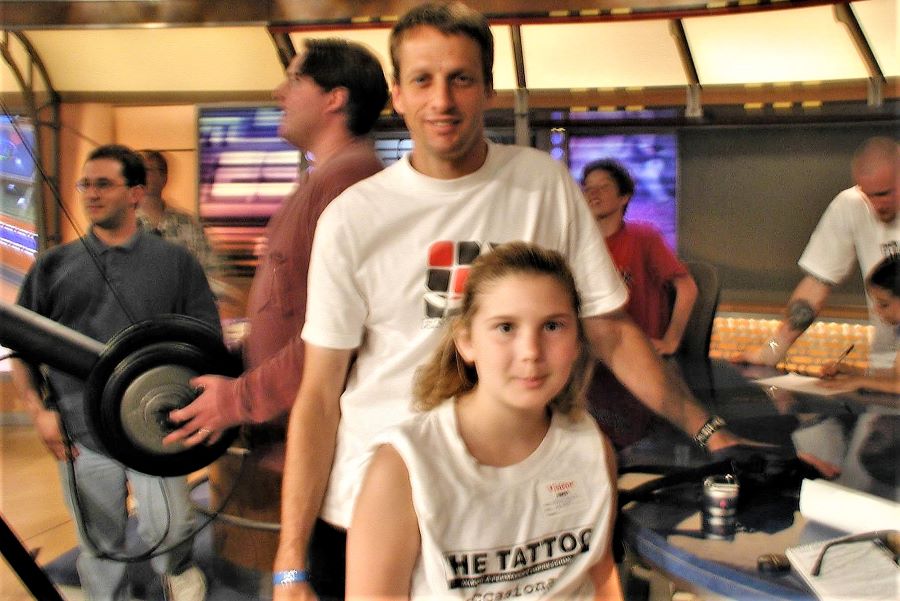 Bristol, Connecticut, United States — Skateboard legend Tony Hawk appeared at the X Trials at Lake Compounce Saturday to sign autographs and have a visit with some of his many, many fans.
Now retired from professional competition, the 33-year-old Hawk was sponsored at 12 years old and turned professional at 14. He has his own video games, action figures, clothes, stickers, his own line of skateboards, posters, and much, much more.
As Hawk was talking to a cameraman at the X Trials, a big group of teens within the crowd of on-lookers screamed his name over and over for him, begging him to come to them and autograph their shirts, boards and other things.
Hawk left later on to go to ESPN with his entourage from The Tony Hawk Gigantic Skate Park Tour to shoot a short clip for their documentary-style show.
The studio — the same one used to produce Sports Center and most of ESPN’s other programs — was vibrant with color, and lights flashed from the transparent circle in the floor in the middle of the room.
There were a lot of televisions everywhere, and lights and cameras covered the ceiling.
In an interview, Hawk spoke about his childhood involvement with skateboarding.
“I was just enjoying doing it,” he said.
Hawk talked about skateboarding’s future.
“It’s getting bigger than it has,” he said.
Hawk also gave out some advice for kids who want to or do skateboard.
“Do it if you really enjoy it,” he said.