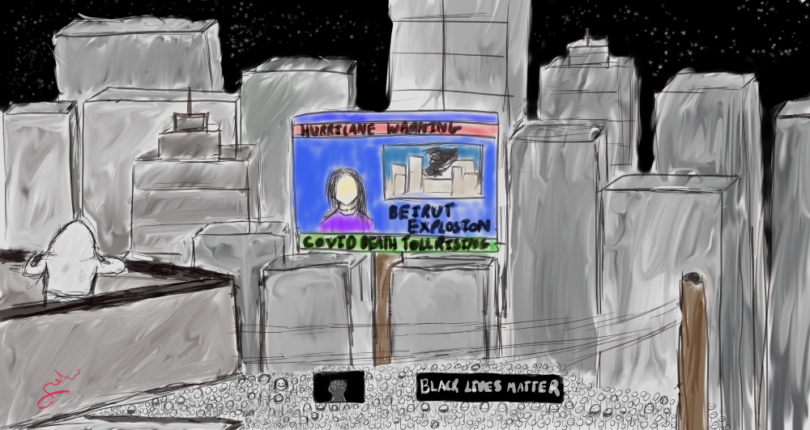 LONDON – In recent months, we have seen our worlds completely change from people going out, living their day to day lives to now being entrapped by our own homes due to lockdown protocols.

But it’s not just the virus that changed our lives.

With the inclusion of the protests over the unlawful killing of unarmed black people in the United States, Hong Kong’s crackdown on its citizens, the Yemen crisis getting worse by the day and the rising influence of far right politics – contributing to leaders like Donald Trump and Boris Johnson – we could be reaching a breaking point, where democracy could be a thing of the past.

Could dystopia become the new art movement in the 2020s?

In the recent past, music and art was plagued by the concept of superficial positivity, with empowerment and encouragement being key topics. The approach may have helped people come to terms with the struggle called life. But as events over time impacted and shaped our world view, optimism often overshadowed core problems in our world and empowered our obsession with capitalism.

But now these positive themes are now rarely seen in art and music.

They’ve been replaced with the sounds of Billie Eilish, a quarantine duet from Justin Bieber and Ariana Grande, Beyonce releasing “Black Parade” for Juneteenth, Grimes with her environmentally conscious Miss Anthropocene and Run The Jewels releasing RTJ4, their most political album to date, coinciding with the Black Lives Matter movement.

Alongside this, we have also seen the rise of dystopian games such as Cyberpunk 2077, to be released in November. With its cultlike following, cyberpunk has influenced fashion movements such as techwear. But the influences from these games often follow a dark route into the sinister reality of our world.

Cyberpunk is often famed for its so-called “high tech, low life” vibe. This sounds absurd as high tech is often associated with advanced and expensive machinery that enables people to live more conveniently.

But this sci-fi genre focuses on how technology has become so advanced that massive corporations could use it to gain authoritative control, which could lead to less freedom.

Early pioneers of the cyberpunk genre include writers William Gibson, Phillip K. Dick and Bruce Sterling. Along with others, they helped shaped the concept of cyberpunk today with it real life influences from such as punk and hacker culture and from political events such as the Cold War.

We’ve seen the influence of corporations on our society over the years and even more so recently with the increased usage of online services such as Netflix, YouTube and Disney+.

While helping to keep people to stay home and stay safe, it is also preventing independent YouTube content creators to earn a sustainable living off their platforms, making them heavily reliant on other services such as Patreon.

With the increasing levels of unemployment due to covid-19, the struggles of living could be the new topic within art and culture in the 2020s.

The rise of politically motivated songs could lead to creatives using their voices to raise awareness of the issues within our society. As people become aware of these issues, they may be more massive protests on the streets, which could escalate riots, bringing more violence and oppression. It’s also possible it would lead to more understanding and change to our unfair world.

The pandemic, which has affected millions of people worldwide, may bring more death and depression to art in the 2020s as people will have a hard time adjusting into the new world and with not being able to grieve as in the past.

If social distancing becomes the new normal, more people could suffer from mental health issues growing out of social isolation.

One thing is sure: the future of art will be more complex and fascinating than ever before.

Xena Fraling is a Junior Reporter with Youth Journalism International. She wrote this commentary.

Salma Amrou is a Reporter and Senior Illustrator with Youth Journalism International. She made the illustration.