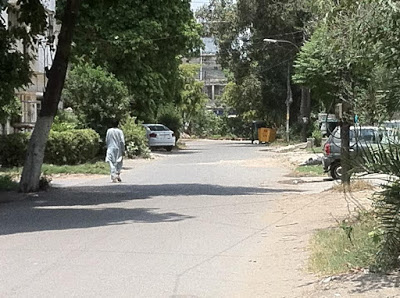 Outside of the Ramadan Bazaar near the intersection with a main road in Lahore, a man stands in the street waiting for customers so he can earn money by carrying their goods. (Arooj Khalid/YJI)
LAHORE, Pakistan – When a heatwave claims lives, people take matters into their own hands.

Though lately the weather where I live in Lahore has been normal, a massive heat wave claimed more than 1,000 lives in the southern part of Pakistan last week.
From news reports, friends and relatives, I know that Karachi, the largest city in Pakistan, was gravely affected with many people, especially the poor and the elderly, falling victim to heat stroke.
Despite the brutal heat, air conditioners, electric fans and water pumps were out of the question in this dire situation because there wasn’t enough electrical power to run them.
As the temperatures rose, so did the people’s frustration with the government. 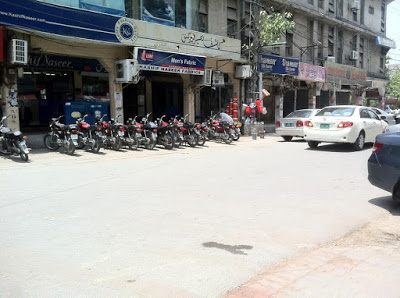 A local shopping area in Lahore with many stores, but no one walking outside in the heat. (Arooj Khalid/YJI)

Officials refused to take responsibility and did little more than blame K-Electric, Karachi’s electricity providing company, for the lack of power.
The lack of electricity, power shut offs and outages are all well known to Pakistanis. In Karachi, the reports are that some people are limited to just eight hours of power a day.
While the water and electricity authorities were busy blaming each other, the death toll kept rising. 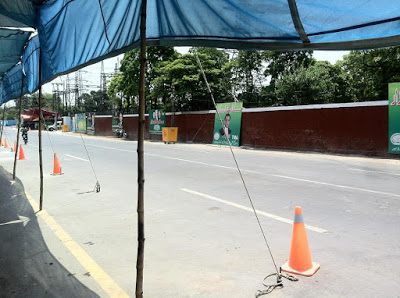 On the side of a Ramadan Bazaar in Lahore, which looks deserted because of the heat. This photo was taken from under the tent where shoppers were. On the wall in the distance are photos of Pakistani politicians, mostly images from members of the current provincial government, reminding citizens of the great job they’re doing. (Arooj Khalid/YJI)

Hospitals filled up and morgues overflowed. The city was at loss for funeral vans and tragically, mass graves were dug.

The phrase “dropping dead” took on a literal meaning as many of the victims of the heat wave met their ends by collapsing on city streets in the scorching heat.
It didn’t help that the heat wave came during the Muslim holy month of Ramadan, when nearly everyone in Pakistan is fasting, which means no food or drink from sunrise to sunset.
Religious scholars clarified that people in the areas affected by the heat wave were certainly allowed to skip fasts at these exacerbated circumstances. Islam allows Muslims who are ill, pregnant, or unable to keep fasts for any other reason to stop fasting and do so at another time. It applies to situations such as this, when keeping a fast could be life-threatening.
Even so, many people were dying.
Citizens, disappointed in the government response, took it upon themselves to handle the situation.
People from all walks of life and ages distributed cold water bottles on streets, helping the patients in whatever way they could in hospitals, streets and markets.
Every other social media post here had something to do with the heat wave. Doctors and trained officials made posts and videos on how to effectively help a heatstroke patient.
Even when the temperatures dropped, the number of deaths continued to rise.
This is said to be the most severe heat waves in Karachi in the past 30 years – and another one is expected next week.
This is an alarming situation for all of us, but the tragedies have certainly ingrained among the citizens the desire to help others.
Unfortunately, the same cannot be said for the government authorities. 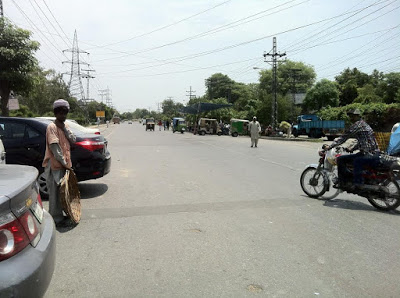 Outside of the Ramadan Bazaar near the intersection with a main road in Lahore, a man stands in the street waiting for customers so he can earn money by carrying their goods. (Arooj Khalid/YJI)

***
Your tax-deductible contribution can help support Arooj Khalid
and other students at this nonprofit at
www.HelpYJI.org