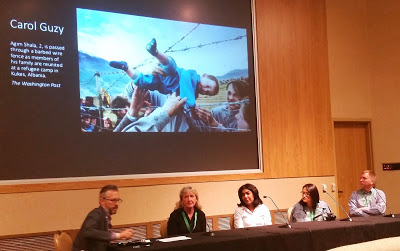 GRAPEVINE, Texas, U.S.A. – It is a common saying that a picture is worth a thousand words. And it is – regardless of what language you speak, the religion you take faith in, or the part of the world you reside.

At the Mayborn Literary Nonfiction Conference outside of Dallas, Texas, four Pulitzer Prize winners spoke about their international experiences with photojournalism and offered advice to fellow photographers.

Whittington initiated the conversation by highlighting one of the prominent issues for modern photojournalists: the ease in which any person with a smartphone can take high-quality pictures.

The panelists agreed that rampant photo-taking makes it more difficult for qualified photographers to get credit for their work.

Living in a world with free social media apps like Instagram, teenagers and adults alike have the opportunity to post pictures as quickly as they take them.

“We are in this place where people are using images to tell a story about themselves,” Pool said, instead of using photography as a means of showing the world a different perspective.

But professional photojournalists, said Pool, “provide context and a true story with meaning.”

The prizewinners told the stories behind their award-winning photos.

Guzy, a four-time Pulitzer winner, won in the Features category in 2000 for work she did in Kosovo as a photographer for The Washington Post.

After traveling for two months with refugee families, Guzy and fellow Post photographer Michael Williamson watched one family pass 2-year-old Agim Shala into the hands of his grandparents on the opposite side of a barbed wire fence, marking a border between countries the families were unable to cross.

“My instincts said to stand next to this particular family,” Guzy said, “for no other reason than my gut said that something was going to happen here.”

Kahn won her first Pulitzer with Guzy and their fellow Washington Post photographer Ricky Carioti in 2010. The team documented earthquake damage in Haiti, including some up close portraits of people.

Kahn and her team made the award-winning image of one elderly woman leaning her head against a tree. The old woman’s body covered in wrinkles, Kahn captured the helpless feelings of a woman who had witnessed a lifetime of disasters.

Pool won a Pulitzer in 2006 for a photo he made from a helicopter of devastation in New Orleans after Hurricane Katrina ripped through the city. Flying 500 feet overhead, Pool saw people on the roofs of buildings next to messages begging assistance from rescue squads.

Pool caught one of his photos looking down at a man behind one of these which read, “The Water is Rising Pleas” and next to another that read, “HELP!”

“It’s not about us,” Guzy said. “It’s about making their stories true.”Guzy and others offered advice that applies to all journalists, both writers and photographers.

It can be hard to see some of the painful moments that photographers witness, panelists said.

Guzy said happy moments can also take a toll. “Even the beauty can break your heart,” she said.

Anyone trying to tell a story with photos should follow their instincts, Guzy said.

Kahn said, “Focus. Don’t let anything get in your way.”

Pool found that even when a photographer is in a hurry, spending the half hour talking to the subject beforehand is valuable. People get more comfortable, and the images are better, he said.

It is essential, Terrazas said, to “connect with people first as a human being before you take a picture.”